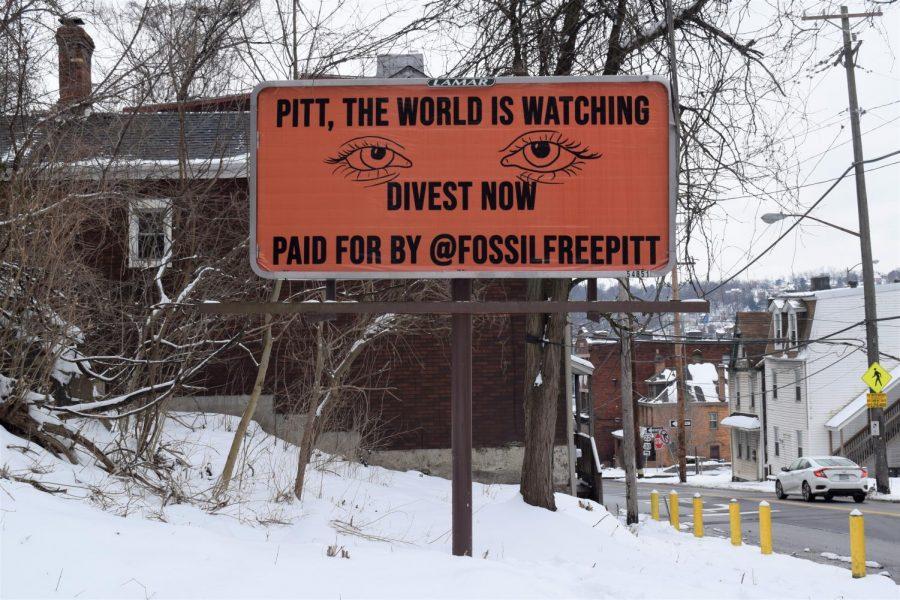 Clare Sheedy | For the Pitt News

The Fossil Free Pitt Coalition unveiled a billboard Monday morning that it purchased near the intersection of Boulevard of the Allies and Bates Street in South Oakland.

The Fossil Free Pitt Coalition unveiled a billboard Monday morning at the corner of the Boulevard of the Allies and Bates Street in South Oakland. The billboard features two eyes and the words, “PITT THE WORLD IS WATCHING, DIVEST NOW.”

Ellen Oordt, a member of FFPC, said the billboard will hopefully remind Pitt’s Board of Trustees of their “moral and fiduciary” responsibility to divest from the fossil fuel industry.

“There are so many eyes waiting for Pitt to make the just decision,” Oordt, a junior ecology and evolution major, said. “We await as Pitt finds the courage to do the difficult thing that needs to be done to ensure a thriving world for our children and grandchildren.”

The Board of Trustees’ Ad-Hoc Committee on Fossil Fuels was tasked with providing a report by Jan. 15, with options as to “whether, to what extent and via what methods the University, in its endowment, should consider divestment from fossil fuels in existing and/or future investments.” The committee hosted two virtual forums last semester to collect feedback from community members about the committee and divestments.

The committee’s report of findings and options — which was delivered to Board Chair Thomas Richards on Jan. 15 — is now under review by Richards and the Board’s executive committee. According to the committee’s website, the full report will be made public prior to any action by the full Board of Trustees.

The board formed the committee in June after years of pressure from the student body, including groups such as the FFPC, who staged a 12-day sit-in at the Cathedral of Learning last spring, as well as a protest at last February’s board meeting. The Board of Trustees unanimously approved a formal socially responsible investing process and committed to carbon neutrality by 2037 in February.

The billboard gained support from other advocacy groups around Pittsburgh including the Center for Coalfield Justice, 1Hood Media, Sunrise Movement Pittsburgh, the Green Party of Allegheny County, CMU Against ICE, Jailbreak PGH and Pitt club Free the Planet.

Oordt said after the billboard was released that FFPC now has three demands:

Chancellor Patrick Gallagher must immediately call for the Board of Trustees to vote to divest from fossil fuels.
Trustees with ties to the fossil fuel industry must abstain from the vote.
The board must involve the input of Pittsburgh community members in reinvestment decisions, including that of the organizations who have signed on to support this billboard.

“By stalling, delaying and ignoring public demands for divestment from fossil fuels, the University of Pittsburgh further exacerbates several crises in which we hold them complicit,” Oordt said. “They are complicit in the impact of environmental racism. Idigenous peoples, Black and Brown communities and low-income communities here and in the global south stand at the frontlines of ecological devastation and governmental neglect.”