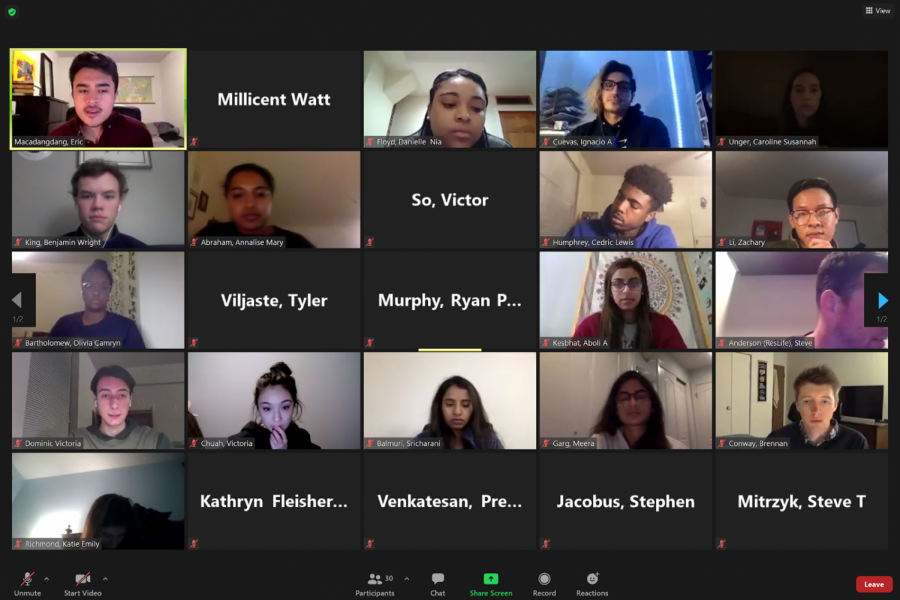 SGB talked about the upcoming election at its Tuesday night meeting.

Instead of fall and spring break this year, Pitt has implemented a series of self-care days, in which classes and meetings are cancelled, and students are encouraged to relax. But many students said they didn’t find the self-care day as relaxing as hoped.

“I know that there were several issues and concerns with how our self-care day worked out last semester in terms of coursework, and we have relayed that information to administration, clearly and directly before the start of this semester,” Macadangdang said. “But please let us know if any issues arise.”

Several SGB members encouraged students to register for Wednesday’s virtual Meet the Candidates event, where students can learn more about board candidates and their platforms, as well as next Thursday’s Presidential Debate — which will focus specifically on the presidential candidates’ platforms. There are 15 candidates running in SGB’s upcoming March 2 election, with Tyler Viljaste, Joey Landsittel and Harshitha Ramanan all running for the president position.

Pitt’s shelter-in-place period ended Tuesday morning, and Macadangdang said although certain activities around campus are allowed to resume, including a new guest and dining policy, students should still adhere to safety guidelines.

“Despite this lift, I do want to emphasize that this is still not a time to be careless about your actions or your behaviors,” Macadangdang said. “Students still need to limit in-person contacts with those outside of your pod, avoid large gatherings, wear a mask, wash your hands.”

Board member Kathryn Fleisher said the outline for the Chancellor’s Public Safety Advisory Council Students Sub-Committee has been finalized. The committee will be in charge of communicating student concerns to Pitt’s administration regarding public safety and policing. Fleisher said the committee is currently reaching out to organizations who would be interested in public safety and policing concerns for representatives.

Cedric Humphrey, SGB’s executive vice president, said the Civic Engagement Hub has completed its business plan proposal that will be sent out to administrative stakeholders — Dean of Students Kenyon Bonner and Kathy Humphrey, the senior vice chancellor for engagement and secretary of the Board of Trustees.

Dominic Victoria, Civic Engagement Hub fellow, said the hub has been focused on marketing and brainstorming ideas of how to reach the student body. Victoria said the Civic Engagement Hub fellows have been contacting professors, creating presentations, making flyers and collaborating with student organizations to make opportunities more accessible. According to Victoria, a future goal is finding a way to get the hub into Pitt’s first-year orientation material next year.

Macadangdang said the Pitt community awaits the final published report of the Board of Trustees Ad Hoc Committee on Fossil Fuels, which was tasked with providing a report by Jan. 15, with options as to “whether, to what extent and via what methods the University, in its endowment, should consider divestment from fossil fuels in existing and/or future investments.” Macadangdang said SGB supports the effort toward divesting in fossil fuels, and wants Pitt to take this opportunity to make a difference.

“SGB will continue to support the organizing efforts that have been going on for several years, which includes our resolution last year supporting the divestment movement,” Macadangdang said. “I hope the University, specifically the Board of Trustees, does recognize this institution’s unique opportunity in promoting stewardship, equity and justice in the face of a global climate crisis.”

Macadangdang also said he encourages students to view the Fossil Free Pitt Coalition’s new billboard at the corner of Boulevard of the Allies and Bates Street.

“If you are able to do so safely, I encourage everyone to take a quick trip down Bates Street this week and get a glimpse of what can be a very simple and powerful message for our University,” Macadangdang said.

Viljaste also met recently with Joe Beaman, Pitt’s director of dining services, and said the board’s dining task force — which works with contractor Compass Group to discuss dining concerns — discussed meal plan pricing, since many students have not been using their meal swipes and dining dollars.

“Beaman met with us and told us there was a significant amount of meal swipes and dining dollars that went unused last semester, more so this year than regular years for the pandemic,” Viljaste said. “The [dining] task force is looking into ways to see meal plan prices become a lot more accessible moving into the future.”

“I’m truly excited to see where this takes the Student Affairs and overall student experience in the future of Pitt,” Macadangdang said. “Dean Bonner has been a great partner to many of SGB’s efforts over the past several years … he truly does have a passion for improving the well-being of all students on campus.”

Pitt’s Meditation Club requested $1,500 for a SKY Campus Happiness program, which is a virtual meditation retreat aimed to help students alleviate stress through meditation. The board approved in full.

Pitt’s club tennis team requested $6,000 as a general expense to rent out tennis courts for practice. The board approved in full.

Panther CrossFit requested $1,350 to pay for a gym rental to allow members a place to exercise and work out. A revision was made to meet the club’s cap of $600. The board approved in full.

Pitt’s National Society of Black Engineers requested $550 to allow two club senators and first-year students to attend a virtual conference. The board approved in full.

A previous version of this article said the “Meet the Candidates” event would occur this Thursday and the presidential debate next Wednesday. The dates were reversed. The article has been updated to reflect this change. The Pitt News regrets this error.