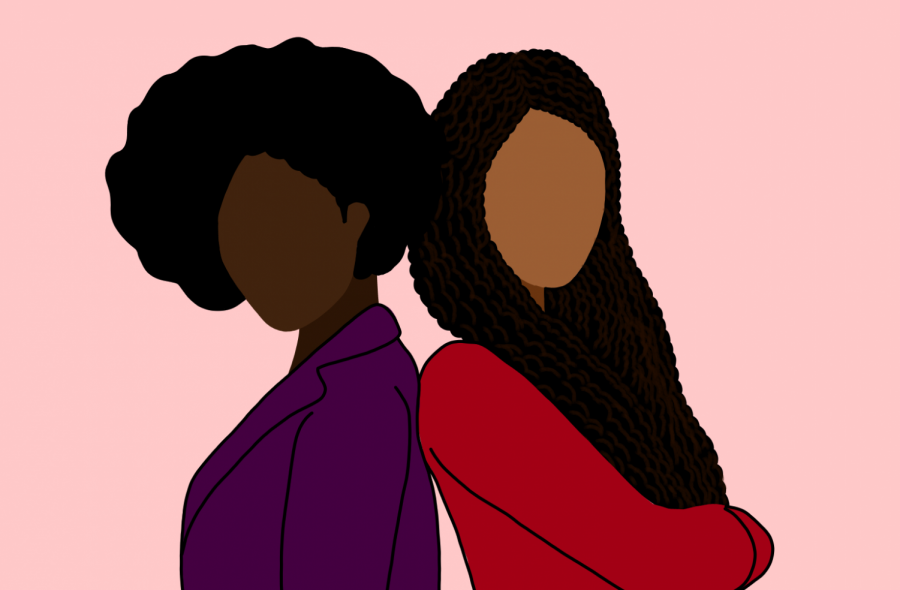 Black hair is diverse. She is versatile. She is gorgeous. But she is a headache. I have embraced my natural coils since I was born on this earth, thanks to my mother who cared for it through my childhood.

With my nappy, natural hair came love and hate — I would get backhanded compliments about my hair being “so long and healthy,” but it would look better if it were “straighter” or “looser.” I was asked if I was mixed because I had “good hair” that was too nice to just be Black. I got teased for having braids and twists — called an octopus, a little boy. I was even called baldheaded. When I embraced my natural hair in its natural state, people would ask when it was getting done, but it was done. My hair grew out of my head and some days I left it as it wanted to be. But that wasn’t enough for people. So many people were caught up in the idea of my hair, but they didn’t understand half of the struggle.

It was one thing to deal with thick, coily hair — the tangles, the knots, the sore shoulders. It is another to deal with hate for your hair. People telling you that your hair is too big, too nappy, too coarse with too many styles. Otherwise stated, too Black. Not just growing up, but now. People will make unsolicited comments about the status of your hair. They will insinuate that you are dirty because you don’t wash it everyday. They will deny you a position because you don’t “fit into company environments.” They will bother you because your hair is in the way. Well, move around.

Black hair has a rich history that extends beyond what my brain allows me to imagine. There is proof of Black hairstyles’ intricacies that dates back to 30,000 years ago — showcasing different braids, twists, wigs and locs on statues and hieroglyphics. Each hairstyle, material and decor had various meanings that Western society overlooked. Black hair had a major role in African culture. It was displayed as a symbol of familial connection, social and marital status, spirituality and tribe. It is due to this fact that we can trace hairstyles back to their origins today — Fulani braids that are still popular today have foundation in braiding styles of the Fulani tribe. We can even trace cornrows back to Africa. Although the name was derived from enslaved persons seeing resemblance to the cornfields they harvested, the braiding style is traced back to Africa.

Though African hair was originally recognized as notable and important, it was through slavery that Black hair became disrespsected. Black hair was compared to wool to diminish the desirability of it, and made to be thought of as inferior to white hair. This was done to help amplify a power dynamic — to be deemed reputable or worthy of social acceptance, one would have to assimilate into Western standards of hair and chemically alter it to be straight. This was deemed to be “good hair.” But that was not enough. In Louisiana, Black women were forced to wear headwraps to undermine their “exotic” features and tempting allure. These Black women did not allow this to stop them from expressing themselves. They decorated their headwraps with jewels, ribbons and feathers — turning this act of oppression to a stance against the government.

Although Black women have worked to overcome societal boundaries and limitations on Black hair, they are still subject to hair discrimination that is systematically engrained into workplaces. Black women with traditonally Black hair and hairstyles are more likely to suffer discrimination in the workplace and are less likely to get a job if they wear those styles. There are even cases of young women being kicked out of school and off of their sports teams for having natural hairstyles. This is not new. When I was a senior in high school, I was suspended from the cheerleading team because my hair was not a “natural color,” but there was a non-Black girl on the team with the same hair color who did not get suspended. I raised war in that school regarding such discrimination, but I shouldn’t have had to.

Hair discrimination does not always present itself as simply as not hiring someone because of their hair. It presents itself as not hiring properly trained people to do Black hair. It presents as someone thinking that a coworker is dirty because they have locs. It can be proved as wanting someone to change their hair to fit an “aesthetic” of your work environment. Though it may be hard to believe, this happens in everyday life and behind the scenes for your favorite celebrities. Trina McGee from “Boy Meets World,” Monique Coleman from “High School Musical” and Tati Gabrielle from “Chilling Adventures of Sabrina” have all spoken about their struggles with Black hair in the film industry. They would have to do their hair independently, come to set with their hair done or cover up mistakes of hairdressers who were not trained in Black hair. That is hair discrimination. How can a hairdresser not be trained in Black hair? Is it not hair?

It is hair. But it’s not just hair. It doesn’t get to just be hair when we are criticized and ridiculed for the way our tresses decide to lay, or the way we get our edges to be laid (to the gawds). Black hair has too much political input to just be hair. It is about more than hair when non-Black people can take Black things and get credit, while we, the creators, take the punishment. Black hair should not be mimicked or mocked if we can not clock into work with it. And there is nothing, no unprovoked thought or unwarranted opinion, that can change my mind — Black hair is professional.

If you would like to learn more about hair discrimination, check out the Crown Culture Club on campus.