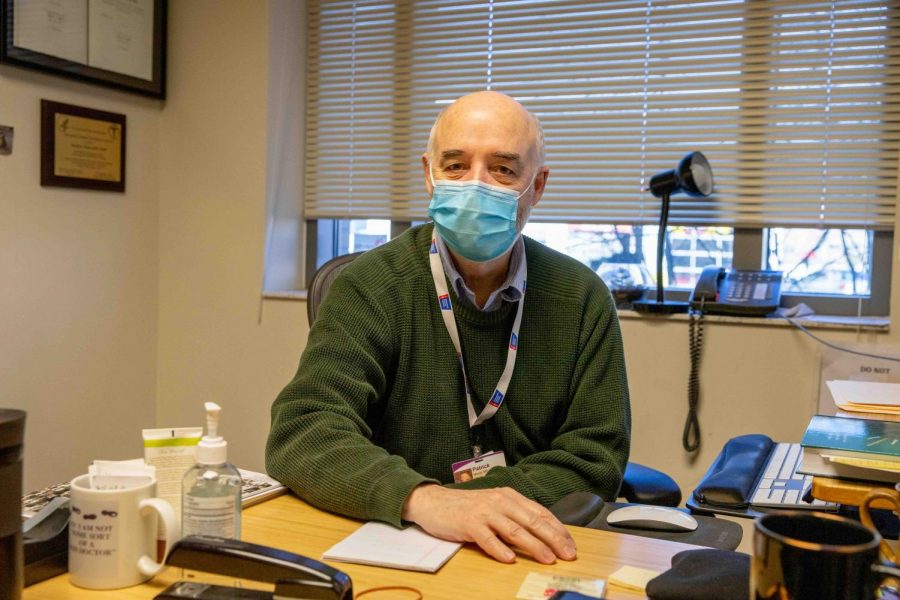 Dr. Moore is a professor of microbiology and molecular genetics who helped to evaluate the safety and efficacy of the Pfizer vaccine with 20 other voting members.

Armed with a 100-page packet of data, Dr. Patrick Moore helped evaluate the safety and efficacy of Pfizer’s COVID-19 vaccine for the United States — in just four days.

But even though the U.S. Food and Drug Administration’s approval of this vaccine wasn’t normal, Moore said he wants all Americans to know the Pfizer vaccine is an important step in ending the pandemic and keeping Americans safe.

“We’re in an emergency, obviously. We have to have some way of stopping this epidemic — it’s completely disrupted our entire social and economic fabric,” Moore, a distinguished professor of microbiology and molecular genetics at UPMC, said. “We’re facing enormous risk from COVID-19, and we feel very confident that there’s very low risk for the vaccine.”

Moore serves on the FDA’s Vaccines and Related Biological Products Committee, which reviewed data regarding Pfizer’s COVID-19 vaccine in December. The FDA approved the Pfizer-BioNTech vaccine on Dec. 11 for emergency use authorization.

Moore said the FDA invited him to analyze preliminary data from Pfizer about the safety and efficacy of its COVID-19 vaccine alongside 20 other scientists. He said the committee gives advice to the FDA regarding the release of pharmaceuticals.

“We give [the FDA] a better sense of whether we agree with releasing it under the circumstances that they’ve posed or not,” Moore said. “It’s a committee that, every year, has to also give advice on the components on the influenza vaccine.”

Moore speculated that he was selected for the committee due to his experience in cancer neurology and chronic disease biology, as well as handling epidemics. As an epidemic intelligence service officer for the Centers for Disease Control and Prevention, he said he worked in Chad and Ethiopia to control meningitis epidemics in Africa.

Moore said all the scientists serving on the committee must be “mature,” since their job is to look objectively at this data in a critical way. Besides the panel’s own critique, the committee comments from the public that were previously submitted to the FDA.

“There are legitimate concerns that people may have,” Moore said. “We should bring [them] up with the company as best we can, even if we, personally, do not think those concerns are terribly important.”

Moore said having the public’s trust in the safety of the vaccine is crucial to get a nationwide vaccine rollout going.

“A reasonable person will want to know, and should know, that people who don’t have a conflict of interest are evaluating this, and it’s based on data, not opinions,” Moore said.

Dr. Shou-Jiang Gao has worked with Moore for many years, initially as a postdoctoral researcher in Moore’s lab at Columbia University. Now Moore’s boss, Gao, a professor in the department of microbiology and molecular genetics, said they focus on cancer viruses. Moore, along with his wife, Dr. Yuan Chang, a distinguished professor in the department of pathology at Pitt, discovered two of the seven human cancer viruses — one in 1994 and another in 2008.

Gao said Moore is one of the “brightest scientists I’ve ever known” and that the scientific review he was a part of was “critical.”

“Scientific review is critical and a topic of public concern in terms of efficacy and safety,” Gao said. “I think the panel, which included him, did a fantastic job and evaluated all the data to give the best recommendation.”

Moore’s former colleague Dr. Lee Harrison, a professor of medicine and epidemiology in the department of medicine at Pitt and chair of the Allegheny County Board of Health, also spoke highly of Moore. He said they traveled together for the CDC, where they intercepted airplanes carrying passengers from Saudi Arabia who may have contracted meningitis.

“We traveled to New York City to intercept Saudia 747s at the tarmac of JFK Airport because there was a big meningitis outbreak going on in Mecca during the Hajj,” Harrison said. “We intercepted before they got to the gate and did a study of how to prevent meningococcal infection in people coming off the airplane.”

While potential COVID-19 vaccines were being discussed months before any approval, Gao said the decision to approve the vaccine must have been a difficult one.

“The majority of these vaccine trials only have two-month data available right now,” Gao said. “They have to make the best scientific judgment they can.”

Moore said there are a lot of hurdles with distributing this vaccine, including the necessity for two doses and identifying patients who are at a higher risk to line them up in an orderly way early on.

Harrison agreed that the vaccine rollout was less than ideal. He said a prevalent issue was having more demand than supply.

“There’s a big demand, and then not as much supply. The logistics of getting people immunized is proving more difficult than was anticipated, and it’s really tough for people to figure out when it’s their turn,” Harrison said. “It’s this patchwork system that is still really suboptimal, to say the least. Hopefully that’s going to get better and better, because we’re not going to get out of this until we get a minimum of 70% of the population immunized.”

Despite the challenges, Moore is optimistic that President Joe Biden’s administration may be able to get the vaccine rollout back on track.

“I’m so happy because now it seems that, at least in Washington, there is an organized attempt at distributing the vaccine in a way that will truly get out to the entire population,” Moore said. “I have hope that it’s being taken quite seriously, now that we’ve lost two to three months during the transition to get to this point.”

Regardless of politics, Gao said he urges everyone to get the vaccine if they have the opportunity.

“They should be vaccinated not just for themselves, but also for whoever they encounter as a citizen,” Gao said. “You could still produce virus to spread to other people, and for those not vaccinated, they may still be at risk.”