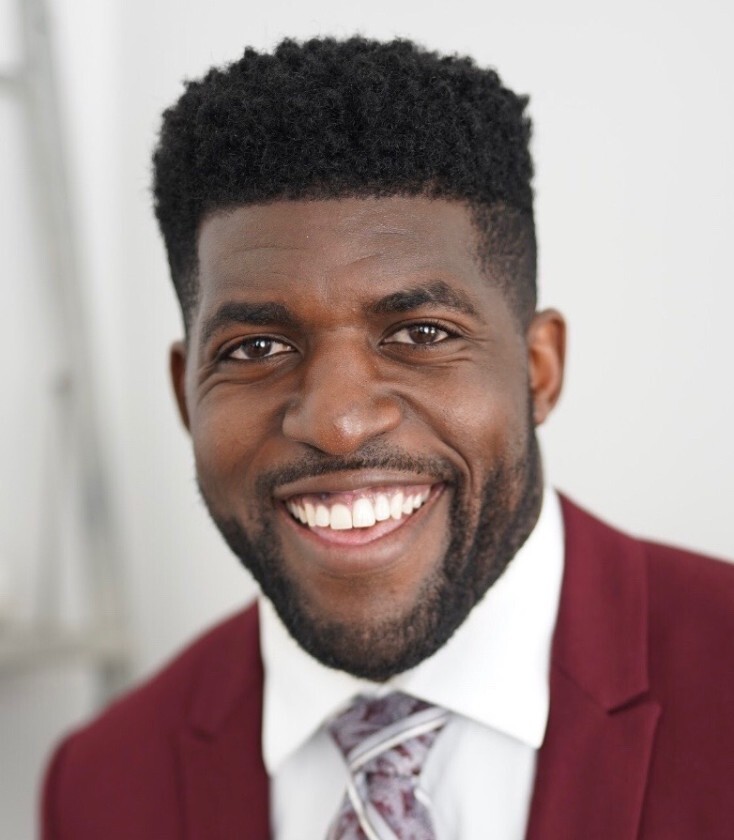 Emmanuel Acho is a Fox Sports analyst and former NFL linebacker who has a webseries called “Uncomfortable Conversations with a Black Man.” Pitt Program Council hosted a talk with Acho Monday night.

Emmanuel Acho is an expert at having uncomfortable conversations. He’s received many awkward questions from white people on his webseries, “Uncomfortable Conversations with a Black Man.” But he said he’s glad he gets those questions — even the blatantly ignorant ones.

Acho is a Fox Sports analyst and former NFL linebacker. His webseries, along with his 2020 book of the same title, aims to advance racial justice in America by involving non-Black people in conversations that many would usually avoid. Acho joined Pitt Program Council in a Zoom event Monday night to bring those conversations to the Pitt community, as part of PPC’s Black History Month programming.

Quincey Johnston, PPC’s lecture director and a junior chemistry major, asked Acho pre-prepared questions, as well as questions from students and faculty submitted during the event. Topics ranged from Acho’s experiences as a student at the predominantly white University of Texas, his perception of racial justice in the NFL and his advice for students navigating their own uncomfortable conversations. In a year of increased visibility for social justice movements, Acho said willful ignorance still stands as the greatest barrier to racial equality.

“We currently have a huge population in this country that’s in denial about oppression, and denial about systemic racism, in denial about police brutality,” Acho said. “How can you fix that problem that you’re refusing to admit that it exists?”

Acho, who grew up in a Nigerian family and attended a majority white private high school in Dallas, said he first became aware of the extent of his white peers’ ignorance in college, after thinking back to his earlier experiences.

Still, he said he didn’t feel that his professors encouraged open conversations about racism. Acho emphasized the importance of pursuing meaningful education about race at the college level, but only from well-informed professors.

“I don’t want an unqualified individual trying to educate me on a matter that I am uneducated on,” he said. “I think certain educators should be primed and ready to have these conversations, but once again, we have to be mindful of the blind leading the blind.”

Chinyere Okonkwo, a first-year political science major, asked Acho how he navigated going to a predominately white school as a Black man. Acho said much of his college and professional experience has required him to code switch, or change his speech and mannerisms, while in white spaces.

“You have to change your vernacular, you have to tuck in the gold chain that you might typically have, because you have to present yourself in a manner that makes them feel more comfortable,” he said. “We have to do a better job of understanding other cultures, exposing ourselves to other cultures, so that we’re not thrown off by said cultures.”

Okonkwo said Acho’s response to her question affirmed her experiences as a Black student at Pitt, and she would have liked to hear Acho talk further in depth about that topic.

“His response affirmed what I have been doing already and made me feel better,” Okonkwo said. “There’s such a huge lack of diversity on [Pitt’s] campus that when you vocalize how you simply do not fit in, everyone thinks that is your own fault and problem.”

According to Acho, students should make more intentional efforts to expose themselves to people of different races and cultural backgrounds while they’re still young.

Acho pointed to Bruce Arians, head coach of the Tampa Bay Buccaneers, as proof that exposure to diversity in college leads to a more tolerant mindset later in life. Arians was the first white player at Virginia Tech to have a Black roommate, and has established a coaching staff that, for the first time in NFL history, has three Black primary coordinators.

Johnston said PPC invited Acho to speak in order to give students the tools necessary to approach uncomfortable conversations about racial justice with reluctant friends and family members.

“I think that’s what the tool in this event specifically is, is being able to have a conversation when you didn’t know how to go about it,” Johnston said. “That’s something we always ask. How do you introduce these conversations to people who might not want to be having them?”

Acho said when approaching uncomfortable conversations, students, especially white allies, should spend time preparing for the conversation, and be upfront about their own ignorance.

“Admit that you’ve been ignorant,” Acho said. “‘OK, I don’t know everything. But here’s what I have learned and here’s where I have been wrong.’ Take ownership of your own shortcomings and your own flaws.”