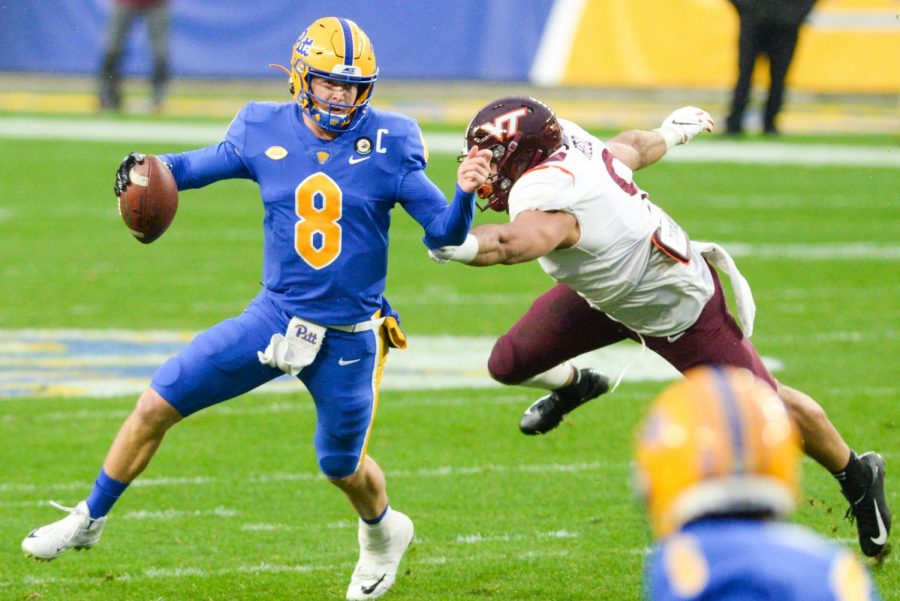 Senior quarterback Kenny Pickett chose to forgo the NFL Draft and return for a fifth year- Staff Writer Carson Zaremski would grant him a 96 for throw power in EA Sports’ College Football.

EA Sports recently shocked fans around the country when it announced the long-awaited return of a college football video game franchise. The last version of the game — NCAA Football 14 — came out in 2013, and since then, college football fans have been awaiting any sign of a return.

Fans will be forced to wait at least another year, as the game is still in early development. Pitt fans in particular will dream of what could have been if a virtual version of the Panthers made it to shelves in time for 2021.

But imagine it was available for purchase in time for this coming season. In a hypothetical 2021 college football video game, the Pitt team you watch take the field on Saturdays could be teleported into your living room. They would be led by a host of returning standout defenders as well as a big-armed quarterback with a young receiver ready to burn your opponent’s defensive backs.

The following is what I think would be Pitt’s 10 highest rated players and the overall rating a fictional NCAA Football 21 game would give them. The players will be rated out of 100, based on the more specific attribute ratings they would get in the game.

Redshirt sophomore safety Brandon Hill spent most of the last season behind Damar Hamlin and Paris Ford, who are now both headed to the NFL draft. In Hill’s lone two starts against Georgia Tech and Florida State, he compiled 12 total tackles, one forced fumble and one interception. Hill also received significant playing time against Notre Dame, racking up eight tackles and a forced fumble.

Hill is a freakish athlete with video-game-like attributes when it comes to his athleticism. But his best quality is his awareness, which this fictional version of NCAA Football would rate a 90. Hill’s ability to break down and read plays is exceptional, and his reach to high-point jump balls is excellent.

Redshirt senior linebacker Phil Campbell has decided to take advantage of an extra year of eligibility and return for his fifth season at Pitt. Campbell wound up tied for third most sacks on the team, which was tied for the most among non-defensive linemen.

Campbell’s best attribute in the game would most likely be his vision at 92. Campbell is outstanding at finding holes in blocking schemes, allowing him to make his way through the offense and get to whoever has the ball quickly.

Redshirt junior defensive end John Morgan spent this last season backing up two defensive ends who have both declared for the upcoming NFL draft — Rashad Weaver and Patrick Jones II. Morgan still had four sacks off of the bench and is on a path to have an impactful role next season.

Morgan’s best attribute is his acceleration, which would be rated at 92. Morgan explodes off the line. He can blow by offensive linemen and even power through them as well to get to the quarterback.

Redshirt sophmore defensive tackle Calijah Kancey stepped up in a huge way during his first full season with the Panthers. Kancey’s presence on the defensive line was good enough to earn him national recognition as a Freshman All-American by the Football Writers Association of America, Rivals and The Athletic.

Kancey’s best attribute is his strength, which would be rated at 92. Kancey loves to bull-rush offensive linemen and put pressure on the quarterback through brute force.

Redshirt senior linebacker Cam Bright ended 2020 third on the team in solo tackles, total tackles, sacks and forced fumbles. Bright remained a consistent and reliable linebacker for Pitt and has established himself as one of the Panthers’ best defensive players.

Bright’s best attribute in the game is his tackling, which would be rated at a 93. Bright’s speed would make him an overpowering force as a pass rusher as well.

Junior linebacker SirVocea Dennis led the Panthers in tackles for loss and was second in solo tackles, total tackles and QB hits. Dennis’ performance in 2020 earned him third team All-ACC honors, joining Jones II and Weaver as the only Pitt players to make one of the three teams.

Dennis’ tackling ability is his best attribute and would be rated a 95 if EA had a game out for next season. Dennis also has a keen ability to read plays as they are happening and efficiently find his way to the player with the ball.

Redshirt senior punter Kirk Christodoulou helped the Panthers to their highest net punting average in school history during the 2020 campaign. Christodoulou was a Pro Football Focus second team All-American and was a candidate for the Ray Guy Award for the best punter in college football.

Christodoulou’s top attribute would obviously be his punting, which would be rated at a 97. On top of that, Christodoulou is an excellent holder and makes important contributions to the Panthers’ special teams.

Sophomore wide receiver Jordan Addison proved his abilities stand out on a national level last season. He was named a Freshman All-American by Rivals, The Athletic and 247Sports and was the runner-up for ACC rookie of the year. Addison led Pitt in receptions, receiving yards and receiving touchdowns.

Addison’s best attribute in the game would be his agility, rated at a 95. Addison can gain yards after the catch and avoid tacklers with his elusiveness, which highlights his game. Addison also returns punts and kickoffs at a high level.

Redshirt senior cornerback Damarri Mathis missed all of this season due to a non-football-related injury that occurred during the off-season. In 2019, Mathis was second in pass breakups and interceptions for Pitt, and his partner at corner at the time, Dane Jackson, is currently on the NFL’s Buffalo Bills.

Mathis’ best attribute is his awareness, which would be rated at a 95 in the game. Mathis has an excellent ability to react to plays and to receivers and position himself in a way that will allow him to defend passes when the ball is thrown his way.

Senior quarterback Kenny Pickett chose to forgo the NFL draft and return for a fifth year with the Panthers. Pickett ranks third all-time in total offense among Pitt players and is fifth all-time in passing yards. Pickett has proven himself time and time again as the leader of Pitt’s offense and the team struggles without him.

Pickett’s highest rated attribute would be his 96-rated throw power. He often throws so hard that his receivers have trouble catching it, and he rarely under-throws receivers. Pickett also shows off his throw power when throwing on the run and out of the pocket.

Pitt’s offense loses two starting offensive linemen, Bryce Hargrove and Jimmy Morrissey, and one of its best wide receivers in DJ Turner. Despite this, the Panthers will return the other eight starters and their offense continues to grow in depth. Additionally, Pitt will get back redshirt senior Lucas Krull, whose season last year was cut short due to an injury.

Despite losing both starting safeties, both starting defensive ends and their top cornerback, Jason Pinnock, from last year, the Panthers defense will return an incredibly deep linebacker group and get upgrades at cornerback with Mathis returning and redshirt freshman MJ Devonshire transferring in from Kentucky.