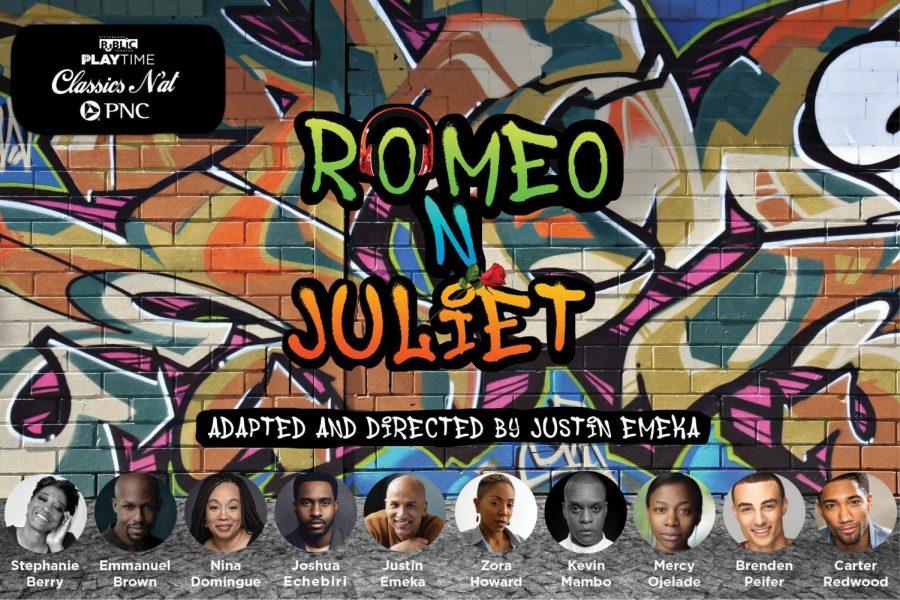 Pittsburgh Public Theater is virtually hosting “Romeo N Juliet” — an adaptation of Shakespeare’s “Romeo and Juliet” — on their website for a small donation fee now until Sunday.

The iconic lines “O Romeo, O Romeo! Wherefore art thou, Romeo?” echo through the computer speakers as the actors of “Romeo N Juliet” take their place in a reimagined — and virtual — Verona.

Pittsburgh Public Theater is virtually hosting “Romeo N Juliet” — an adaptation of Shakespeare’s “Romeo and Juliet” — on their website for a small donation fee now until Sunday. Director Justin Emeka creates his own version of the Shakespearen classic, recorded through Zoom and featuring an all-Black cast, which centers on the feud between an immigrant family from the West Indies and a family from a Black community in the United States.

Pitt Arts will offer a free viewing of “Romeo N Juliet” for Pitt students on Saturday. Following the play, a public town hall will take place on Feb. 25 as well as a creative workshop with Emeka on Feb. 27.

Emeka has a history of working with adapted plays. His previous projects include an all-Black adaptation of “King Lear,” “Macbeth” set after the Civil War, “Death of a Salesman” featuring a Black family and his adaptation “Boougie Gentlemen” from “Bourgeois Gentlemen.”

“I’m very interested in just seeing how Black culture integrates into the world of Shakespeare’s plays, and I have a long history of doing that,” Emeka said. “I looked at it and said, ‘Well, what if Juliet’s family is Black immigrants from the West Indies, and the Montagues are Black American,’ and I just kind of explore a little bit of the tension that can sometimes exist within the Black community.”

“The language of course is very specific to the time and the culture. But what we played with in this adaptation was what it is to be young and in love and have that be scoffed at,” Peifer, a 2019 Pitt alumnus, said. “I think we really maintain that tradition, but we bring our own originality. We bring in those universal emotions of love of grief.”

Considering “Romeo N Juliet” takes place in an all-online format, Emeka said the play relied on various elements — including the actors — to produce a realistic environment.

“A lot of it is because I use the staging of pictures and the music,” Emeka said. “And then also having the actors go into their closets to create their characters really helps tell the story as well.”

The actors also faced challenges adapting to the online format. Zora Howard, who plays Juliet, said the cast dealt with complications that do not normally exist during live performances.

“One thing that I like about Zoom — and taking advantage of in this production — is that you’re able to gather people from all over the world [to create] a cast. And that’s been really kind of awesome in rehearsals,” Emeka said.

Emeka remains true to Shakespeare’s characters but with his own twist. Howard said her role differed from her initial predictions as to how Juliet would be portrayed.

“I had all these preconceptions about what it would mean to play Juliet that have been ingrained in me throughout years of training and going to the theater and reading Shakespeare’s work, but the Juliet that I got to play was very different from what I imagined it might be,” Howard said.

Some actors needed to take on more than one role during the play’s filming — Peifer, for example, plays both Mercutio and Brother John. He said it was an interesting experience to tackle such different roles.

“You have to make specific choices to distinguish the characters from one another. On Zoom, you can only do limited things, but you can change your costume up and change your positioning in the camera,” Peifer said. “Most importantly, I just try to separate the two objectives that the characters have.”

Even in a reimagined setting, Howard said she appreciates how Emeka developed each character for the modern stage.

“He has such a vision, and he really makes space for the other creators or collaborators in his projects. He really wants to know each individual actor, what they have and what they naturally bring, and then just create the stage for them to amplify that,” Howard said.

With the play’s incorporation of Black culture, “Romeo N Juliet” creates a space for Black actors to retell Shakespeare’s tale. Emeka wants the audience to understand the Black experience through his adaptation.

“My kind of goal as an artist is to teach people to embrace the complexities of Blackness, learn of people from all backgrounds to learn how to see themselves in Black culture in a way that really creates empathy and love for Black people,” Emeka said.

“There’s representation from across the Diaspora. There’s the intricacies of Black American culture and Black Caribbean culture,” said Howard. “It’s a dynamic world. It’s not just a flat Blackness, but [Emeka] really tries to lift it with what Shakespeare has already written, what is already there on the page. But it’s the way that he covers it.”