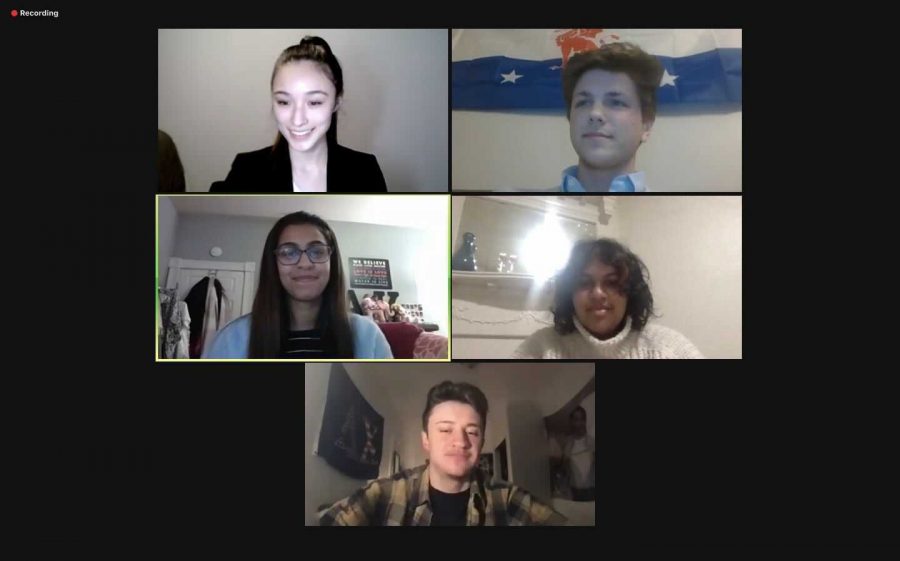 Student Government Board hosted the Meet the Candidates event Wednesday evening for Pitt students to get to know who will be on the ballot in the upcoming election on March 2.

Student Government Board hosted the Meet the Candidates event for students to get to know who will be on the ballot in the upcoming election on March 2. With a total of 15 candidates, three are running for president — Harshitha Ramanan, Joey Landsittel and Tyler Viljaste — and 12 competing for eight board positions. The candidates are also split into the Brightside, Vision, Elevate and Betterment slates, and two candidates are running independently.

Viljaste said what sets their slate apart is that all the members are heavily involved in SGB and have been listening to student feedback throughout their careers in student government. According to Viljaste, he and Kesbhat have been part of SGB for three years, and Moore and Chakraborty for two years.

“We didn’t start getting student feedback at the start of this campaign, we’ve been doing it for the past three years,” Viljaste said.

Kesbhat, chair of SGB’s allocations committee, said working on the committee has allowed her to interact with many student groups, and she is impressed with organizations’ work and wants to give back and provide them with the resources they need.

Moore said because of his involvement in a multitude of different clubs, including College Democrats, SGB and Greek life, he can bring different perspectives and experiences to the board.

According to Chakraborty, when she was a first-year, she felt extremely alone, but quickly found her place at Pitt by getting involved and joining SGB. She said her immense love and passion for Pitt will allow her to serve Pitt’s student body.

Viljaste said he and his slate have “talked the talk, and walked the walk.” He said due to uncertainty caused by the pandemic, students should put their trust in candidates who have student government experience and know how to get things done.

Murphy said he specifically wants to work on expanding civic engagement, as well as making voting resources more accessible and available for students. Murphy not only wants to strengthen bonds within the Pitt community, but also the outside community by working with Oakland Planning and Development Corp. and its Adopt-a-Block program.

Floyd, who chairs SGB’s wellness committee, said her focus is to make mental health resources more accessible to students, and plans to use her experience on SGB to continue working with different coalitions and student groups to make that possible.

“It has really allowed me to see what the real issues are in our communities,” Floyd said.

Goodwin said finding her people at Pitt has given her the passion to help others find their place at the University. Goodwin also said she wants Pitt to maintain aspects of [email protected] — such as having recorded lectures or Zoom classes — even when in-person classes resume, in order to make classes more accessible.

The Vision Slate made a brief introduction before having to leave the event. The slate consists of four juniors — math and physics double major Joey Landsittel, who is running for president, as well as mathematics, computer science and economics triple major Dan Rudy, emergency medicine major Nadine Sadaka and bioengineering major Jessie Rindfleisch, who are running for board. Rindfleisch was not present during the event.

Landsittel said as an RA interacting with his residents, as well as reading content posted online, he has identified many issues on campus that he wants to address, such as making mental health resources more readily available and making SGB more transparent.

Sadaka also said her experience with the pandemic as an RA has made her see how the pandemic has affected her residents. She wants to use SGB as a way to alleviate certain pandemic-related stressors, including mental health and financial stress.

The Betterment Slate, with first-year politics and philosophy major Jack Ruotolo and junior political science and economics double major Brennan Conway running for board seats, said their goal is to “make Pitt better.”

Ruotolo and Conway said they agree that the pandemic made this year difficult, but they want to reflect and learn from mistakes, and use those mistakes to make Pitt better. Ruotolo wants to make sure Pitt students are at the center of all conversations, and that they are taken into consideration when making decisions.

Harshitha Ramanan, a sophomore neuroscience major, is running as a presidential candidate independently. As a first-year, Ramanan was part of Pitt’s Resident Student Association, where she discovered her passion for helping others, especially those in the Pitt community.

According to Ramanan, she “makes no promises” about parts of her agenda because while SGB impacts decisions, it’s the administration who makes the final decisions.

“I understand that even though Student Government Board is really big, at the end of the day it’s the real adults that are calling all the shots, but I can promise that I will fight to make sure your voices are heard,” Ramanan said.

Ramanan said she wants to run for president because her goals are focused more on the Pitt community as a whole rather than smaller, more specific communities. She said being president will allow her to have the platform to achieve her goals.

Daniel Temmallo, a first-year political science and PPW double major, wants to advocate for the Pitt classes of 2024 and 2025 as an independent board candidate. According to Temmallo, many SGB candidates and members are juniors and seniors who focus on older students, but Temmallo wants to shift focus more on the Pitt community’s younger members.

Temmallo said he wants to show students that they don’t have to be very involved in Student Government Board or First Year Council in order to get a board position or make a difference.

“I want people to see that no matter what you’re doing, or where you’re from, you can make a difference and you can make it onto student government, and you can impact the lives of your other students,” Temmallo said.