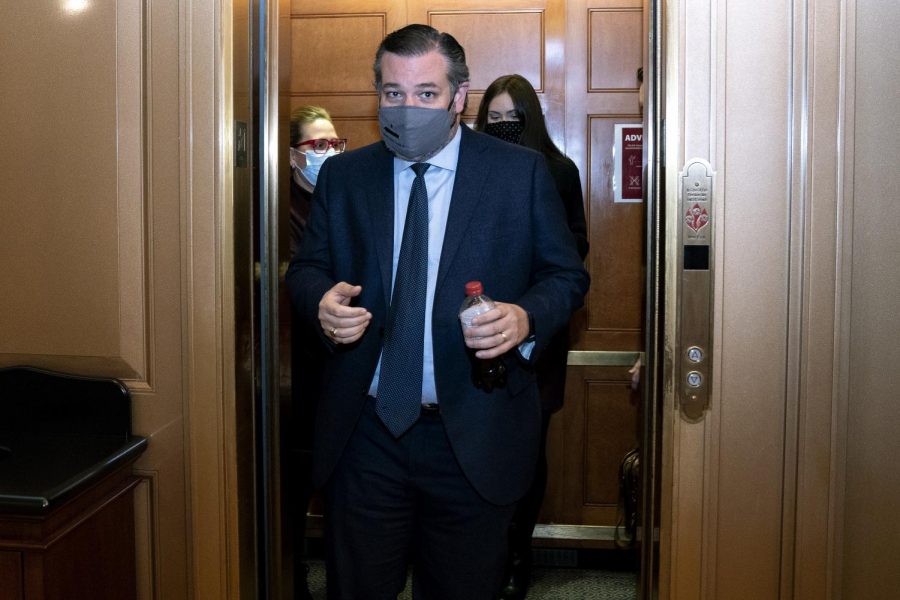 Sen. Ted Cruz, R-Texas, flew to Cancun Wednesday while many of his constituents in Texas struggled through an unprecedented crisis. (Stefani Reynolds/Pool/Getty Images/TNS)

In Houston on Monday night the low temperature hit 13 degrees Fahrenheit, which, at the time, was colder than most parts of Alaska. This was the result of a historic winter storm which has still left hundreds of thousands of people without power and water.

The situation in Texas is dire, and it’s been exacerbated by GOP politicians who aren’t interested in the wellbeing of their constituents — Ted Cruz took a convenient vacation, and Gov. Greg Abbott used the crisis as an opportunity to riff on green energy. The politicians’ behavior has prompted a storm of memes and jokes on social media platforms like TikTok and Twitter. It’s crucial to hold these politicians accountable for their actions, but not through memes and jokes, which distract from the severity of the crisis. Residents are struggling to find drinking water and heat.

Since Texas hasn’t experienced weather this extreme for some time, the state’s power grid essentially failed due to residents scrambling to heat their homes all at once and generation plants not being equipped for the cold. As of Thursday, more than 500,000 homes and businesses still had no power — and officials are warning people that they may have to wait a few more days before they get electricity back. This has left people with no choice but to find alternative sources of heat — layering clothes, firing up grills and gas generators. The New York Times released a guide about avoiding carbon monoxide poisoning, targeted specifically for people who had resorted to ovens and cars as a heat source. Homeless people are freezing to death in the streets. Many residents are without water, too. Pipes are bursting due to the cold, which has left people with frozen faucets and in some cases, no water at all.

In the midst of all of this, Cruz left on Wednesday for a trip to Cancun with his family. Their “house was freezing,” his wife wrote to a friend, and Cruz later justified abandoning his state in crisis by saying he wanted to do something nice for his kids. Though Cruz eventually flew back to the state he supposedly represents and said he regretted his trip, this is likely because of the heavy backlash he faced — from both prominent politicians and random high school TikTok users alike.

Cruz isn’t the only Texas politician gravely mishandling the crisis. Earlier in the week, in an effort to deflect blame on poor preparation, Abbott claimed the power outage was due to frozen windmills. He said the outage is an example of why green energy, and enacting the Green New Deal, would be a failure.

“[The power outages] show how the Green New Deal would be a deadly deal for the United States of America,” Abbott said. “It just shows that fossil fuel is necessary for the state of Texas, as well as other states, to make sure that we will be able to heat our homes in the winter time and cool our homes in the summer time.”

As it turns out, the outages were due primarily to natural gas failures.

In response to Abbott’s comments, and the general lack of leadership in Texas, state Rep. James Talarico, who as of Tuesday was still without power, chastised the politicians in a Twitter thread.

“A state that prides itself on energy production left millions of its citizens to freeze in the dark,” he tweeted. “This is not a natural disaster — it’s years of underinvestment, deregulation, and neglect.”

Memes and jokes make light of the crisis in Texas — a crisis that politicians are mishandling, and a crisis that’s leaving people without heat and water. Instead of joking, we need to pay attention to what’s happening. We need to hold these politicians accountable.