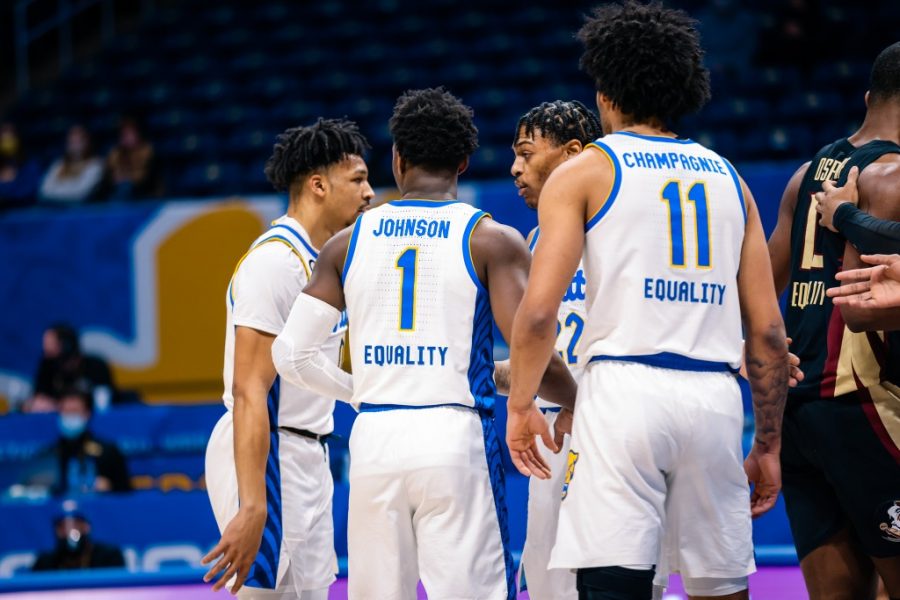 One would be hard-pressed to find a college basketball coach who revels in moral victories or celebrates a loss, no matter how competitive their team was. But in the middle of a worsening four-game losing streak, it can often be helpful to search for the positives.

While making sure to add that he was not satisfied with the loss, Pitt men’s basketball head coach Jeff Capel praised his team’s effort on Saturday against ACC power Florida State and said the Panthers’ faults could be summed up simply.

“I’m really proud of our effort today,” Capel said. “I thought we fought for 40 minutes. I also thought we did some really good things tonight. I thought the game came down to our inability at times to finish.”

With a vocal, five-person contingent of the Oakland Zoo jeering and cheering from just to the left of the media suite for the first time this season, Pitt (9-9 overall, 5-8 ACC) battled No. 16 Florida State (13-3 overall, 9-2 ACC) for most of Saturday’s contest at the Petersen Events Center. But the Seminoles’ size and depth proved to be too much for Pitt to handle in the end. FSU dominated the paint offensively, en route to a 79-72 win over the Panthers.

Pitt returned every punch the Seminoles delivered in the first half. Just before the midway point of the opening period, Florida State capped a 7-0 run with an and-1 dunk from first-year star Scottie Barnes. The expected 2021 NBA Lottery pick, who drew scouts from the Cleveland Cavaliers to the Pete for Saturday’s contest, converted the subsequent free throw to extend the Seminole lead to 10.

Barnes led a long-armed defense that made life difficult for both Pitt’s ball-handlers and rebounders. Florida State’s height and length frustrated the Panthers — even sophomore forward Justin Champagnie, the ACC’s leading rebounder — all game.

“It’s rough,” Champagnie said. “You can’t really prepare for a team with that size. But I feel like I tried to face the guys so I can get to the free throw line. I feel like my team isn’t the same, but we just fought.”

But despite the physical disadvantages, Pitt closed the gap quickly. A 13-4 run for the Panthers, fueled by a pair of 3-pointers from guards junior Nike Sibande and redshirt sophomore Ithiel Horton.

Sibande, who made just his fourth start in a Pitt uniform on Saturday because of an injury to typical starter junior wing Au’Diese Toney, turned in easily his best performance of the season. The transfer from Miami (Ohio) logged season highs in minutes (31), points (12), rebounds (7) and field goal attempts (10).

He was a star scorer for the RedHawks in three years at Miami, averaging double-digit scoring figures in each season. But since arriving at Pitt, Sibande’s playing time has been inconsistent, not just because of the step up in talent around him, but a delayed transfer waiver process as well.

And now, after a breakout game, his teammates still don’t think Sibande has reached his full potential, and neither does Sibande himself.

Sibande and Horton’s triples, in addition to 13 first-half points from Champagnie, kept the Panthers close. They entered halftime down only six.

Pitt came out in the second half ready to match Florida State’s physicality. The Panthers picked up their defensive intensity, but all that got them was a load of fouls. The game slowed to a crawl as the penalties began to rack up.

Pitt’s free throw shooting kept the Panthers in the game briefly, but they made it to the line only twice inside of the game’s five minutes and were unable to find enough live-ball offense to make up for it.

Florida State’s veteran lineup expertly handled the pressure put on by underdog Pitt. The Seminoles locked down defensively and made free throws, demonstrating the maturity that has built them into one of the ACC’s best programs.

A 6-0 run from the Panthers cut the Seminole lead to just three inside of one minute left to play. A 3-pointer made in transition by junior guard Xavier Johnson bounced on the rim twice before falling through and igniting the friendly sideline. But Florida State would go on to sink five of six free throws in the closing seconds and secure the victory.

In the loss, Champagnie’s regular excellence felt shockingly ordinary. The ACC Player of the Year candidate dropped his conference-leading ninth double-double of the season — a 21-point, 10-rebound performance — only to have it overshadowed by the loss.

It was always going to be a brutal February for Pitt. When the schedule was released, Pitt was already scheduled to play multiple strong conference opponents — Virginia, Virginia Tech and NC State, among others — in succession. Then this weekend, a pandemic-induced postponement meant that this weekend’s opponent would be a top-25 team rather than the recently surging, but still relatively weaker Clemson Tigers.

Still, there are no points for close losses or awards for playing a tough schedule. But there is a small pause for relief coming up. While obviously subject to a potentially sudden postponement, Pitt will get eight days off before it next plays.

Currently on the schedule is a road trip to Raleigh, North Carolina, where a 4 p.m. tipoff with NC State awaits.