Opinion | The danger of foreign activism in Indian affairs 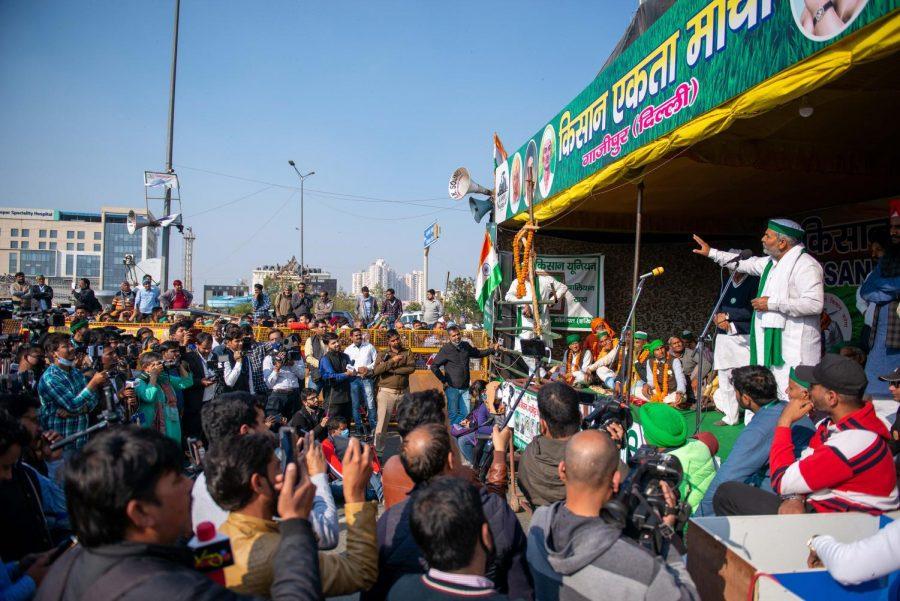 Rakesh Tikait, spokesperson of Bhartiya Kisan Union, addressing farmers during the demonstration on Saturday, Feb. 6, in Ghaziabad, India. Farmers called for roads to be blocked across the country as protests continue against the central government's recent agricultural bill.

Six words. That was the length of a tweet posted by pop star Rihanna that drew the ire of Indian leaders, celebrities, athletes and millions of citizens.

Those six words were “why aren’t we talking about this?”

Recently, many non-Indian celebrities have been speaking out about the ongoing farmers’ protests on the outskirts of New Delhi. While each of these celebrities’ tweets were well intentioned and aimed at helping struggling people, the Indian government’s infuriation at their messages highlights how foreign activists involved in Indian affairs can create complications for themselves and the people they advocate for if they do not heed caution in spreading their message.

To understand exactly what dangers foreign campaigners face in India, it’s imperative to know why this issue is coming to the fore of our global society. In September, as part of the Indian government’s plan to double India’s economy by 2024, it passed new laws designed at removing governmental protections from the agricultural sector in favor of increased privatization. The legislation was condemned by Indian farmers, with many claiming that the new legislation would allow large corporations to profit at their expense. As a result, farmers began holding tractor rallies and peaceful protests at the main entry points to New Delhi in an attempt to see a full repeal of the new legislation.

But on Jan. 26, the protests turned violent. A sect of the protesting farmers clashed with police, leading to the historic Red Fort being overrun, hundreds of casualties and the worsening of relations between the Indian government and protest leaders. The Indian government then retaliated by suspending internet access in multiple districts in Haryana, likely to prevent information about the protests from reaching other farmers and for protesting farmers from working with one another online. Additionally, the government increased the presence of paramilitaries and fortifications near the farmers’ camps.

The global response to the government’s actions was immediate, with calls supporting the farmers coming from foreign leaders, activists and celebrities. But many of the responses failed to consider India’s complex political climate, and as a result, those seeking to help the farmers may have inadvertently harmed the farmers’ cause. Leaders in the Indian government deemed the foreign response as “propaganda” and called for Indian citizens to stand “united and together to achieve progress.” In turn, many celebrities who initially attempted to spotlight the protests were attacked by Indian users on social media and had their images burned on the streets.

As evidenced by the protests and their response, the problems associated with foreigners trying to advocate for Indians stem from Indians’ deep-seated distrust of foreigners and an increasingly authoritarian government. British ethnocentrism, a divisive partitioning of the nation in 1947 and the crippling of the Indian economy by British policies have all presented in India a culture of hatred toward the British and other Europeans. The wariness Indians had for foreigners would expand to include more and more non-Indian peoples as a result of wars with Pakistan and China as well as terror attacks originating from outside the country.

The attitude of Indians toward foreigners has been a key tool that India’s government has been able to take advantage of while becoming ever more authoritarian. Since coming to power in 2014, the Bharatiya Janata Party, led by Prime Minister Narendra Modi, has been increasing its own power at the cost of true democracy. Modi’s government has brought India-Pakistan relations to the brink of nuclear war in order to improve his re-election chances, passed two highly anti-Muslim bills due to increasing Hindu nationalist sentiments and, in the case of the farmers’ protests, pressured India’s Parliament into rushing the controversial bills through the legislative process.

Once foreign activism became involved, it set back the farmers’ progress. In attempting to focus the world’s attention on the events unfolding in India, foreign activists have allowed the Indian government to redirect its actions from compromising with the farmers to ending the protests immediately.

For the protests to be beneficial, it is imperative that the government and leaders of the farmers’ unions are able to come together unimpeded and parcel out a solution. This means that if foreign activists are to get further involved, their actions must be taken carefully, as any new response that could be interpreted as critical would likely cause more harm than good. The best messages are those of reconciliation and unity, with calls supporting both sides working together to improve agriculture in India. The United States Embassy in Delhi provided a good example of how foreigners could speak out by releasing a message that both supported the Indian government’s efforts to “improve the efficiency of India’s markets and attract greater private sector investment” and called for both parties to resolve their differences “through dialogue.”

To ensure progress and peace for the farmers and the Indian government, carefully constructed messages calling for dialogue between all parties would do more good than any sanctions, boycotts or aggression could. It is up to us to look out for those mistreated by their government, but in doing so, it is better to approach the situation with caution and care. India may currently appear to be a despotic land bent on embracing nationalistic policy, but the peaceful, compassionate India that the world once knew will surely return with the support and care of our global society.

Kartik Kannan is a first-year studying biological sciences. You can contact Kartik at [email protected].