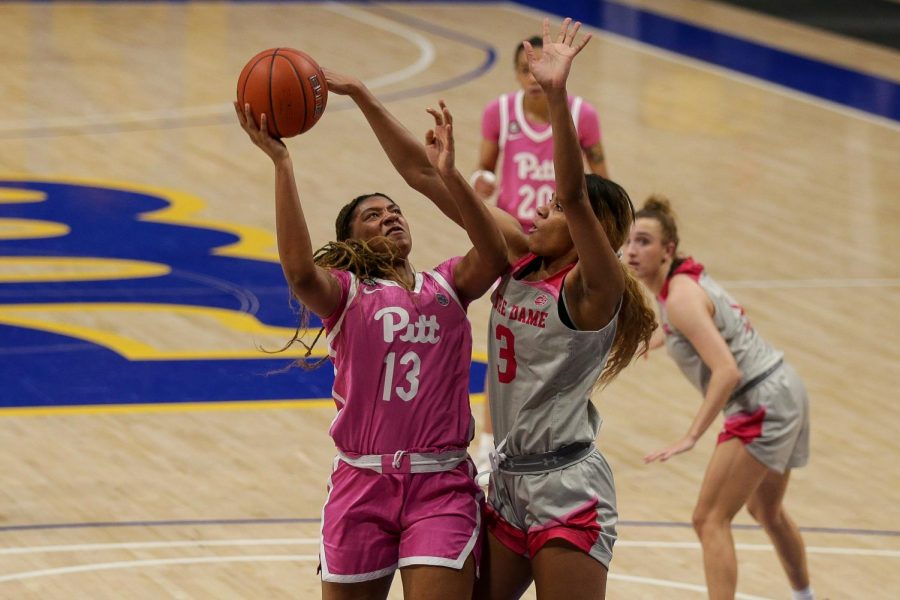 The Pitt women's basketball team capped off its final home game of the 2021 season with a 59-48 loss to Notre Dame on Monday evening.

“It’s every fundamental of the game,” White said. “Free throws, too many turnovers and decisions we have to be able to make that we didn’t make.”

The Panthers donned their all-pink alternates for Pitt’s annual “Pink the Pete” game, a night dedicated to breast cancer awareness. The team honored Pitt employee Jodi Hummert before the game with a video and a framed pink jersey.

Sophomore guard Dayshanette Harris was not active for Monday’s game due to a leg injury, which she suffered in Pitt’s last game against Louisville. White remained unsure on what specific injury she sustained. Sophomore guard Emy Hayford started in Harris’ place.

The Panthers started Monday’s game slowly. Similar to their game against Louisville, they only scored nine points in the first quarter, while missing both of their free throw opportunities. Unlike the Louisville game, though, Pitt didn’t get nearly as many second chances, grabbing only a single offensive rebound. That one rebound did turn into two points for the Panthers, but the period ended with Notre Dame leading 13-9.

Panthers senior guard Gabbie Green suffered a sprained ankle in the first quarter, according to White. She hit the floor going after a loose ball and came up limping, and sat out for the rest of the game.

The second quarter didn’t fare much better for Pitt. Free throws arose as a problem for the Panthers yet again, missing all six of their attempts at the line in the first half. In contrast, Notre Dame hit five of its six free throw attempts. The Panthers’ lack of offense after Green’s injury became apparent quickly. The Irish outscored Pitt 17-11 in the second quarter to finish the half with a 30-20 lead.

In an attempt to curb the offensive deficiencies of the depleted lineup, several younger players came off the bench for their first big minutes of the season. First-year forward Tracey Hueston — one of the players who received an extra opportunity — finished the night with four points, five rebounds and a block in 12 minutes. Hueston knew that the bench needed to step up after losing key players to injury.

“It’s obviously very hard losing two huge hustle players for us,” Hueston said. “Some freshmen have to match that hustle and give us that defensive bounce.”

Those offensive deficiencies carried over into the second half, as the Panthers didn’t score for the first three and a half minutes of the third quarter. Through the first four minutes, Pitt only scored four points to go with seven turnovers. The Panthers only put up 11 points in the quarter, but limited Notre Dame’s offense, which added 13 points in the frame.

These struggles did not apply to Irish first-year forward Maddy Westbeld, who dropped an efficient 20 points on 7-15 shooting for the game. Hueston expressed anticipation for future matchups against the fellow young competitor, who snagged 11 boards for a double-double.

“I definitely would look forward to it,” Hueston said. “She played great tonight. I think it’s on us to really lock in on her and limit her points and rebounds.”

The fourth quarter turned into the best quarter for the Panthers. They outscored the Irish 17-16 and hit four 3-pointers, one more than they’d hit in the first three quarters combined. But the late run didn’t prove enough for Pitt, who finished a horrific 3-15 from the free throw line for the night. The final buzzer sounded with Notre Dame winning 59-48.

Monday’s game, which turned into a defensive battle for the Panthers, saw Pitt play more impressively at that end of the floor than it had in months. The Panthers held their opponent to under 60 points for the first time since their game against Hofstra on Nov. 29. But Pitt also scored fewer than 50 points in a game for the first time all season. White didn’t enjoy the lack of urgency on his side.

“I was disappointed in our energy and in the way we came out,” White said. “I thought our freshman came in and really provided a spark, but those other kids have to step up, and we didn’t do that as well as we needed to.”

The Panthers will travel to Raleigh, North Carolina, to face No. 2 NC State (15-2, 10-2 ACC) on Thursday. It will be the Panthers’ first meeting with the Wolfpack this season, but the team hasn’t fared well in its only top-five matchup so far, falling 82-58 to No. 3 Louisville last week.