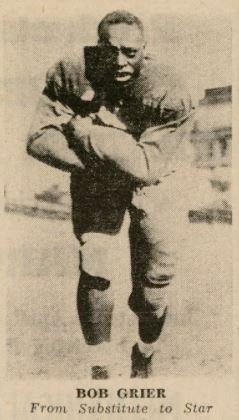 Perhaps the most beautiful aspect of sports is the ability to transcend the confines within which they are played. You would be hard-pressed to find a more transcendent athlete in Pitt’s history than Bobby Grier.

Grier, who integrated the Sugar Bowl in 1956, made a profound impact on the field, but especially off of the field. His story has carried through the years, although it hasn’t received the attention it deserves. It’s hard to find a single Pitt athlete in the school’s history who deserves recognition in the Pitt Athletics Hall of Fame, yet Pitt has inducted three classes without calling Grier’s name.

The Hall of Fame currently has 19 Black inductees, and Grier is not yet one of them. Somehow, Pitt has recognized a total of 42 other sports figures as more deserving of the Hall of Fame’s prestige. With the 2021 class introduction soon approaching, Pitt has no excuse to delay Grier’s induction any longer.

Grier starred at fullback and linebacker for Pitt football from 1952-55. At the culmination of his senior season, the No. 11 Panthers headed to New Orleans to take on No. 7 Georgia Tech in the Sugar Bowl. But Grier’s status for the game sat very much in question –– not because of injury, but because of the color of his skin.

The American South remained segregated at this point in history, and Grier’s potential participation in the Sugar Bowl sparked colossal reactions. The governor of Georgia, Marvin Griffin, along with the Board of Trustees at Georgia Tech, called for a forfeit if the Panthers did not bench their lone Black player.

But Grier had plenty of support to drown out this hatred. His teammates and the University vowed not to participate in the game without Grier, and many Georgia Tech students and football players also came out and protested in support of Grier. Ultimately, the Georgia Board of Regents allowed the game to go on, but established that Georgia teams could not play against integrated teams in the future. However, Georgia never ended up enforcing this rule.

In the face of adversity, with thousands of people in Georgia, Louisiana and all around the country rooting for Grier’s failure, he became the first Black man to participate in the Sugar Bowl. The Panthers lost the game 7-0 due to a costly pass interference call on Grier, which has since been acknowledged by referees as a blatantly incorrect call.

Grier is now 88 years old, living with the distinction as the man who integrated the Sugar Bowl on Jan. 2, 1956. Almost exactly 21 years later, on Jan. 1, 1977, Pitt won the College Football National Championship over the Georgia Bulldogs 27-3. The location of that game? New Orleans. Its title? The Sugar Bowl. Black players, including Heisman Trophy-winner Tony Dorsett, could participate in that game because of the courage of Grier, and Pitt’s “No Grier, No Game” mentality.

The integration of the Sugar Bowl remains one of the greatest and most unrecognized achievements in Pitt’s storied athletic history. Grier paved the way for Black college athletes to live out their dreams and play on the biggest stage.

Ohio State and Clemson made the trek to New Orleans to compete in the Sugar Bowl this season as part of the College Football Playoff. The game remains one of the most prestigious and prominent bowl games in the sport, and Grier will always be the man who made it what it is today.

Adding Grier to the 2021 class seems like a no-brainer. He paved the way for the 1976 Pitt team to have the capability to go to New Orleans and win a national championship. He blazed the trail for countless Black athletes who play college football in the South, and yet very few people have even heard his name.

Pitt inducted its inaugural Hall of Fame class in 2018, and two more full classes have followed since, none of which include Grier. While he may not flaunt the statistical accomplishments of the 42 athletes and coaches currently in the Pitt Athletics Hall of Fame, it is hard to argue that even a handful of these people have made a bigger impact on sport than Grier, or been more instrumental to the success and image of Pitt Athletics.

Grier should finally receive the recognition and distinction he deserves for his landmark contributions to Pitt Athletics, Black athletes and sport in general. When it comes time to introduce Pitt’s 2021 Hall of Fame class, Grier’s name should be at the top of the list.