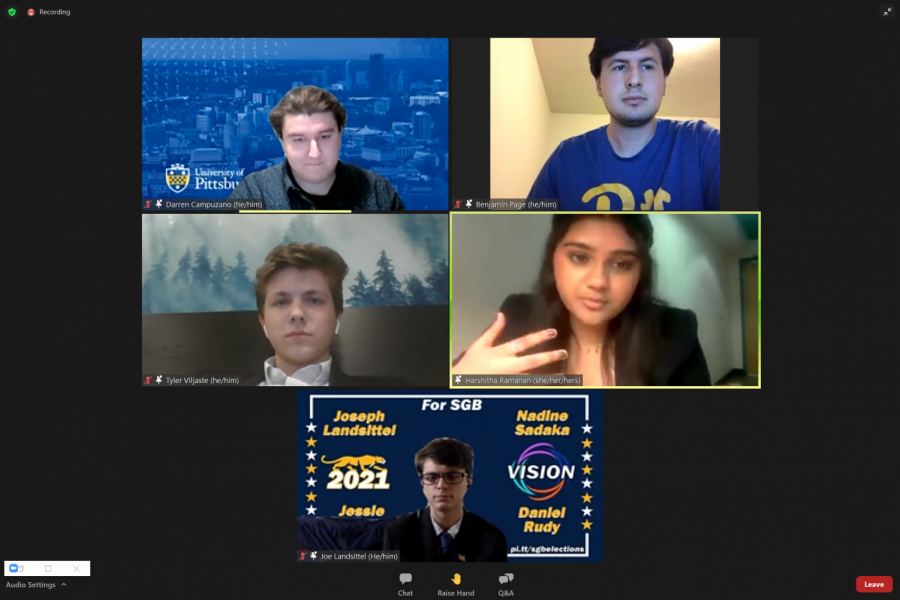 The debate for the next Student Government Board president included heated conversations about prior SGB experience, Student Activity Fee funding and even one candidate pulling out their calculator to check allocations information listed on SGB’s website.

The debate began with each slate — which are similar to political parties — introducing themselves and their platform. Benjamin Page, of the Political Science Student Association, and Darren Campuzano, the WPTS Radio station manager, moderated the Thursday night debate and posed questions to the candidates centered on prior SGB experience, the allocations process, how to best achieve diversity and inclusion on campus and other topics ahead of Tuesday’s election.

Tyler Viljaste is the top of the ticket for the Brightside slate, and is running alongside Aboli Kesbhat, Matt Moore and Nikhita Chakraborty. Joseph Landsittel is on the Vision slate, with board candidates Daniel Rudy, Jessie Rindfleisch and Nadine Sadaka. Harshitha Ramanan and Daniel Temmallo are running as independent candidates for president and board, respectively. The Betterment and Elevate slates don’t have presidential candidates.

One of the first — and most hotly debated — questions was about the divide between candidates who are currently on the board and those who aren’t. Viljaste is currently an SGB vice president and chief of cabinet. Landsittel was part of SGB’s First-Year Council two years ago, and Ramanan is entirely new to the organization. The candidates discussed how their prior experiences may influence their plans as president — and whether significant experience in SGB should be a deciding factor for voters.

Viljaste said lacking prior SGB experience does not automatically grant students a better perspective, and that being on SGB has allowed him to see its flaws and be able to improve upon them.

“I don’t think SGB outsider-ship grants you that uniqueness of a different perspective and honestly I think being in Student Government Board is one of the best ways to be able to understand its flaws and be able to work on ways to actually improve the organization and so I intend to do so in a variety of ways,” Viljaste said.

In response, Landsittel said leadership skills can come from a variety of experiences — such as being a resident assistant, in his case — and he finds it “arrogant” that having in-depth SGB experience is the only way to be “qualified” for the president position.

“Leadership comes in many forms and to suggest that one form … might qualify you for this position, any more than other forms, I think it’s arrogant, I think it’s simply not true,” Landsittel said.

Viljaste said due to his experience specifically on the board, he is more “qualified” for the president’s job.

“Honestly, I find it incredibly rude to say that it’s arrogance [that] comes from this perspective — that you know being in Student Government Board makes you, you don’t have that unique qualification,” Viljaste said. “I think that having worked on initiatives, having seen things through to fruition, having done incredible benchmarking, and incredible work and actually making real change does in fact make me qualified.”

Ramanan, the Resident Student Association’s vice president of programming, said working closely with residents has given her an “outsider view” that she can bring to SGB.

“[SGB and RSA] have a lot of parallels in what we do and I think that makes me uniquely qualified because I have an outsider view,” Ramanan said. “So I still have a lot of residents who make up a large part of the student population coming to me and telling me, ‘Hey this isn’t working out, how can we make this better?’”

The question of how to best allocate funds to student organizations was also heavily debated. Even after the Student Activity Fee decreased from $100 to $80 last semester in anticipation of reduced spending, SGB was left with about $300,000 that went unused. This leftover money is ultimately added to a reserve fund, which Student Affairs oversees. Some of the candidates said they believe these unused funds should be saved to support student organizations in the future.

Ramanan said that while SGB didn’t anticipate the COVID-19 pandemic, the Board can use the surplus to help student organizations attract students and hold programs.

“We didn’t expect a pandemic, but it happened, but if there’s no flexibility, like you said, you’re running a surplus this year but that doesn’t necessarily need to happen because I’m sure there’s tons of organizations who would be grateful to like have that money in order to not only attract more students but also to start programs that are useful,” Ramanan said.

Viljaste said by dipping into the surplus now, and reducing or getting rid of the Student Activity Fee, there may not be enough funds left over in the fall to support student organizations, give out scholarships in line with the Black Senate’s demands or renovate the sixth floor of the William Pitt Union to create a better space for Pitt’s many cultural organizations.

Landsittel said through talking to student organizations, he has discovered that there are a number of changes needed to SGB’s Allocations Manual. He said the manual is ingrained with “systemic discrimination,” because LGBTQIA+ student organizations have been denied funding in the past for performance events, such as hosting drag shows. Landsittel also said certain clubs he’d spoken with had requested funds from SGB to help pay for cultural food catering, but were denied, and resorted to buying snacks from grocery stores.

He added that decisions regarding allocations should be done entirely during public meetings, instead of in private, and then “superficially” voted on in public. Landsittel also said allocations decisions should be more accessible on SGB’s website, so students don’t have to sift through articles from The Pitt News.

According to Viljaste, he had organized similar cultural events, and said SGB was able to fully fund the events, as long as the cultural food was the focus of the event.

“As long as the cultural food is the core part of the event, it can be done — two organizations have done that before,” Viljaste said. “So I would encourage anyone who has any questions about that to contact me — I have experience, it’s not really something we deny.”

Viljaste also said the LGBTQIA+ task force, which he leads, is addressing systemic issues and to make sure organizations have access to SGB-managed funds.

Viljaste and Landsittel also debated about the true percentage of funds allocated this academic year, with Landsittel arguing that SGB only allocated 7% of its total funds. Viljaste, in response, said SGB has distributed more than 7% and the amount can be seen on SGB’s website.

Landsittel then pulled out a calculator, and noted the SGB website only listed slightly more than $63,000 in allocations out of the $900,000 typically offered every academic year from the Student Activities Fund — equal to about 7%. But the Board only has about $560,000 to distribute this year according to current president Eric Macadangdang, meaning the roughly $63,000 already given out is equal to about 11% of available funds.

“I would suggest going to the meeting notes, and actually attending public meetings and actually getting a sense for what the allocations requests are being approved,” Viljaste said. “And so we can all be adequately informed candidates in the election.”

Ramanan said student organizations may not request funds sometimes because they find the allocations request process too confusing, which may deter them from asking for money in the first place.

“I think it’s very easy for student organizations to sort of look at things and be confused, but that just means we have to listen to them and cater things more towards them,” Ramanan said.

The candidates were also asked how they would make Pitt, as a predominantly white institution, more inclusive.

Viljaste said the LGBTQIA+ task force was created due to the lack of resources for LGBTQIA+ students at Pitt. Viljaste said the group has put together a proposal that includes changes to the Counseling Center, Student Health Center and ally training.

Ramanan said to increase inclusivity, she would promote and encourage students to attend cultural events, because while Pitt has many diverse cultural events and clubs, not enough students know about them.

Landsittel said he wanted more diverse staff in the Counseling Center and to reform the allocations process to be more open to cultural organizations.

In his closing remarks, Viljaste said that although the debate got heated, it showed how passionate the candidates are about making Pitt better, regardless of each candidates’ differences.

This article has been updated to reflect the amount of SAF money available this year to SGB.