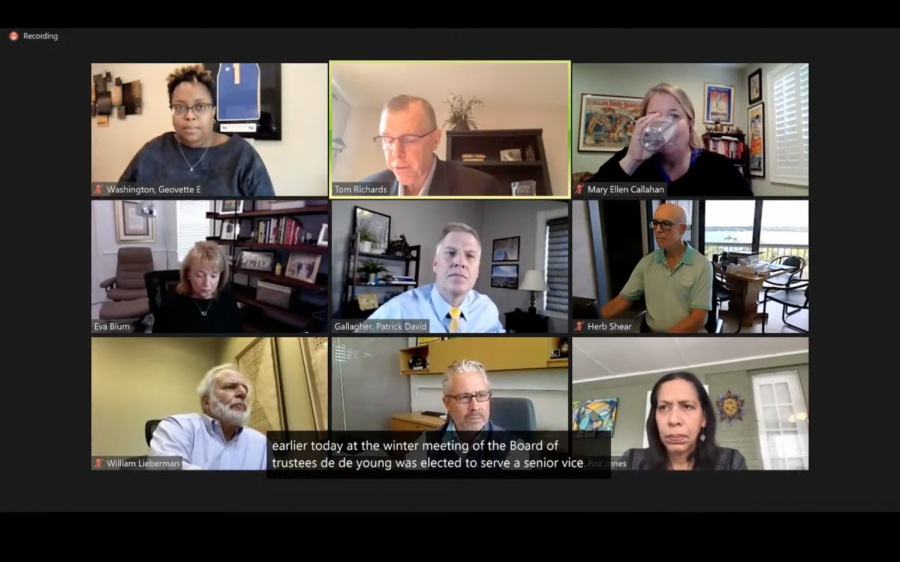 The compensation committee of the Board of Trustees met Friday afternoon to approve the salary for the new senior vice chancellor for business and operations.

Pitt’s Board of Trustees took several actions at its Friday morning meeting, including approval of a resolution expressing appreciation for all the Pitt community has done to adapt to the ongoing COVID-19 pandemic.

Trustees took turns reading the resolution, which thanked Chancellor Patrick Gallagher for his “extraordinary strength and wisdom,” expressed “high regard” for University staff, thanked Pitt’s “talented and resilient” faculty and noted that students “gracefully withstood a drastic change” to their lives.

The Board also approved two vice chairs nominated by the governance and nominating committee — Mary Ellen Callahan, the assistant general counsel for privacy at the Walt Disney Company, and Lou Cestello, the executive vice president, head of regional markets and regional president for Pittsburgh and southwestern Pennsylvania at PNC Bank. Both abstained from the vote.

The Board also took personnel action, confirming David DeJong as the University’s senior vice chancellor for business and operations.

DeJong had been serving in the position, which has wide-ranging responsibilities from housing and dining to Pitt police and facilities, in an interim capacity since May after Greg Scott took personal leave and ultimately resigned from the University. DeJong is a long-time Pitt administrator and has served in roles including the head of human resources and executive vice provost.

Gallagher said DeJong is someone who he can count on to address the “big challenges and the hard problems” at Pitt.

“It’s the combination of his deep appreciation and knowledge of our mission and his commitment to it combined with his track record of being someone who gets things done that leads me to his selection as our senior vice chancellor for business and operations,” Gallagher said.