Gallagher reflects on one year of COVID-19 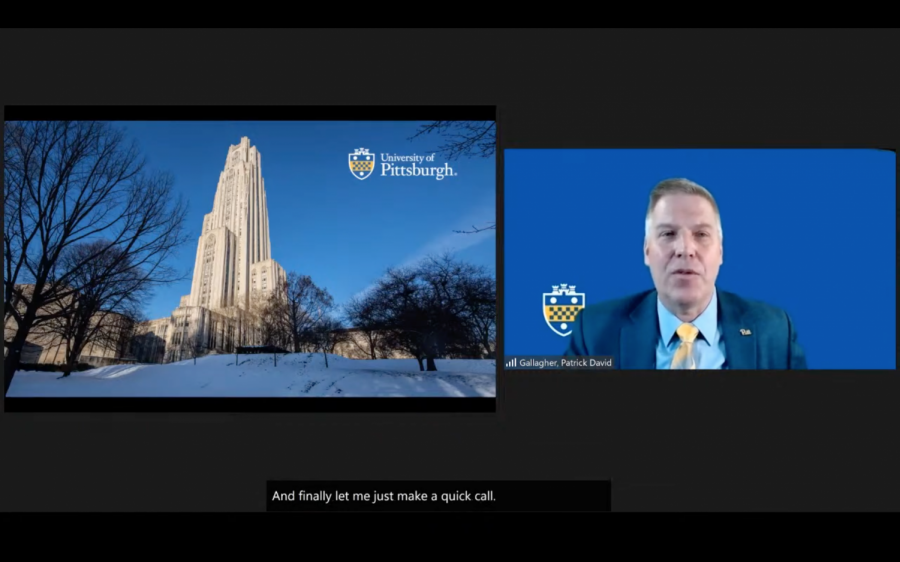 Chancellor Patrick Gallagher spoke about several issues facing the University at Friday's Board of Trustees meeting.

At last February’s Board of Trustees meeting, Chancellor Patrick Gallagher said Pitt was taking a “hope for the best, prepare for the worst” posture for what would soon be declared as the COVID-19 pandemic.

Gallagher said at Friday’s Board meeting that it’s taken “every single person in this University to adapt and change in ways that we didn’t even understand when we were doing it.”

“It’s hard to really comprehend everything that’s happened since then,” Gallagher said.

Gallagher spoke about the pandemic’s effects on Pitt and several other key issues facing the University at the Friday morning meeting.

He noted that case counts remain low so far this semester, and said transmission has mostly been through social settings, such as when students eat or drink together and are not wearing masks.

“I think what we can conclude from this data is that the communication works, and that students and faculty and staff really understand the expectations and understand what it takes to effectively lower the risk of transmission of this virus, and they are really listening and buying into this,” Gallagher said.

Gallagher said he has been encouraged by the speed at which providers have produced vaccines and Pitt’s efforts to help distribution. Pitt’s School of Pharmacy helped run a two-day vaccination clinic in late January at the Petersen Events Center, and another one in February in Pittsburgh’s Hill District and Homewood neighborhoods, which are predominantly Black.

“It’s worth stepping back and recalling that the production of these vaccines — very effective vaccines, multiple vaccines — against this virus that was only becoming emerging 12 months ago is an astonishing achievement,” Gallagher said. “One of the most rapid [developments] of effective vaccines from discovery that has ever occurred.”

While the pandemic did affect Pitt’s budget this year, Gallagher said the University’s long-term financial outlook has not been drastically altered and remains “strong.” He said Pitt has implemented temporary, one-time budget reductions, while also noting that it applied permanent cuts to try and encourage divisions to “reward innovation.”

“Many of you are reading in newspapers about other universities that have been forced to take dramatic and drastic measures of a permanent nature, including furloughs and campus consolidations,” Gallagher said. “It’s really through our efforts at cost containment on our base budget that we have not needed, nor do we expect to need, to take any of these kind of dramatic steps.”

Gallagher also discussed graduate and undergraduate student enrollment. He said it’s “important” to talk about enrollment because it’s “an area of great disruption” amid the pandemic.

On the undergraduate side, Gallagher said Pitt will “certainly” set a record for the number of new applications. While the admissions process is still underway for undergrads, applications are up 4.6% for fall 2021 compared to fall 2020. This includes increases for underrepresented minority, Black and Latinx applicants. But international student applications have seen a more than 7% decline.

“The news is all positive with one exception — international students,” Gallagher said. “This is largely driven by the continued effects of the pandemic on global mobility and the ability of people to move.”

Gallagher noted that the Office of Admissions and Financial Aid reviewed nearly half of all applicants without standardized test scores — utilizing Pitt’s new ACT and SAT test-optional policy.

“These trends are not good, and frankly they’re not acceptable,” Gallagher said. “It is a fundamental part of our mission. We are a comprehensive research-intensive University. Our global reputation is staked on the quality and breadth of our graduate and professional programs and not solely on our undergraduate programs.”

Gallagher added that the University is currently planning to address this issue, and it will be a part of the revised strategic plan that Pitt will release in June.