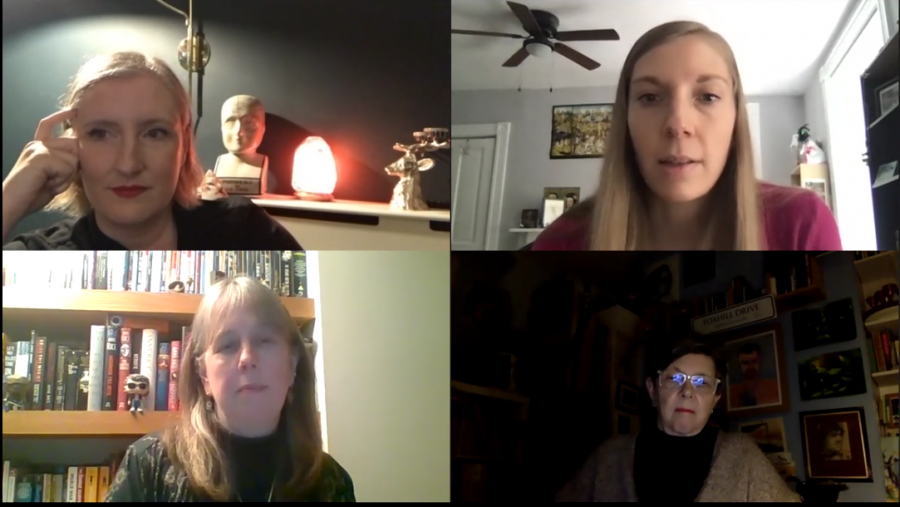 Lesley Manning, the director of “Ghostwatch,” joined a panel of horror experts on Friday to discuss the impact of the film. Sonia Lupher, a visiting lecturer in film and media studies at Pitt and the founder and editor of “Cut-Throat Women: A Database of Women Who Make Horror,” organized the event.

The investigation of a haunted house in Northolt, London, on a chilly Halloween night in 1992 went terribly wrong when the show host was attacked by a malicious poltergeist. Pipes rattled and paintings flew off the walls as the spirit unleashed its wrath.

“Ghostwatch,” the revolutionary horror film that shocked the U.K., took months to produce. But its pseudo-documentary approach and casting of well-known television personalities, such as the talk show host Michael Parkinson, led thousands of terrified viewers to call the BBC studio and demand to know if ghosts were real.

Lesley Manning, the director of “Ghostwatch,” joined a panel of horror experts on Friday to discuss the impact of the film. The Horror Studies Working Group and the Honors College sponsored the “Conversation With Lesley Manning, Director of ‘Ghostwatch.’” Sonia Lupher, a visiting lecturer in film and media studies at Pitt and the founder and editor of “Cut-Throat Women: A Database of Women Who Make Horror,” organized the event.

Manning explained how the film transformed from a BBC serial to a full-length feature, and her creative process with producer Ruth Baumgarten and writer and creator Stephen Volk.

“It had a journey,” Manning said. “It started off as multi-stranded, with lots and lots of ghost stories all beamed into the studio.”

Manning and the other filmmakers eventually settled on the story of BBC reporters investigating a ghost named “Pipes” haunting a mother and her children in their home. According to Manning, they hadn’t intended to trick viewers into thinking it was a live broadcast. The public’s visceral reaction, which began during the crew’s celebration party, was a shock to everyone.

“Ruth wanted us all off the street because it was supposed to be live. She booked us a place on the river to all have a drink,” Manning said. “She went to the BBC, because she was worried about the phone-ins. The number that we put up, we all agreed we had to man, so we manned it twice. The number was the BBC phone lines. We also had a whole raft of parapsychologists and specialists to answer any overflow.”

That evening, the BBC received almost 1 million phone calls about “Ghostwatch.” Sarah Greene, the host who had been attacked by Pipes in the film, made an appearance on Children’s BBC to prove she was unharmed, but the controversy continued to grow, with some parents claiming the film had traumatized their kids.

Stacey Abbott, a TV horror specialist at the University of Roehampton and one of the discussion panelists, attributed the overwhelming response to the time period. Cell phones and social media weren’t around to share information about the show in 1992, and the pseudo-documentary approach wasn’t as popular in horror films as it is today. Also, the film’s working-class, suburban setting had a strong impact on viewers who lived in similar neighborhoods.

“In the early ’90s, everyone would stop to watch it all at the same time, which added to the perception that [‘Ghostwatch’] was a live event,” Abbott said. “This show predates the rise of paranormal television, which, obviously there’s such a wealth of that kind of TV now.”

Ten years passed before “Ghostwatch” was released on DVD, and during that time, it never aired again on U.K. television. Abbott explained that the BBC’s refusal to show the film only led to an increase in popularity and fans.

“‘Ghostwatch’ taps into one of the most primary definitions of cult … it’s found and discovered and loved by an audience,” Abbott said. “There are viewing parties every year around Halloween where people try to recreate the experience of watching it live.”

Lupher said Manning’s directing in “Ghostwatch” can serve as an inspiration for women in the horror genre.

“I think it will be really interesting for [students] to … hear from both filmmakers and scholars on the topic of women in horror TV production,” Lupher said. “I hope [it will] influence budding filmmakers, especially female filmmakers, to start thinking about their own projects and what they might do in the future.”

Manning also talked about how being a female director shaped her career. Even though “Ghostwatch” earned positive ratings and a cult following after its initial broadcast, Manning said she didn’t receive any other offers from the film industry.

“It was a sort of vacuum,” Manning said. “It was very hard for the industry to think that women were of note, I think, in those days.”

Aislinn Clarke, director of the 2018 Irish horror film “The Devil’s Doorway,” connected Manning’s experience to the idea of women being seen as one-hit wonders in the film industry. She said that success doesn’t always guarantee more opportunities for female directors.

“Women have to actually go and show that they can do it before someone trusts them to do it,” Clarke said. “Whereas a guy can have the training, and they’ll go, ‘I’ll give him a chance.’”

Despite the film’s controversial reception, Manning’s directing had an undeniable impact on the horror genre. According to the panelists, Manning’s use of tape, rather than film, and her decision not to include a soundtrack are two stylistic choices prevalent in pseudo-documentary and found-footage films today.

At the end of the conversation panel, Manning said she’s excited to be working on a new “heartbreaking” film project with Volk.

“You’re creating tension and shocks, and you’re working with stress and anxiety,” Manning said. “I’m waiting for the next offer of horror.”