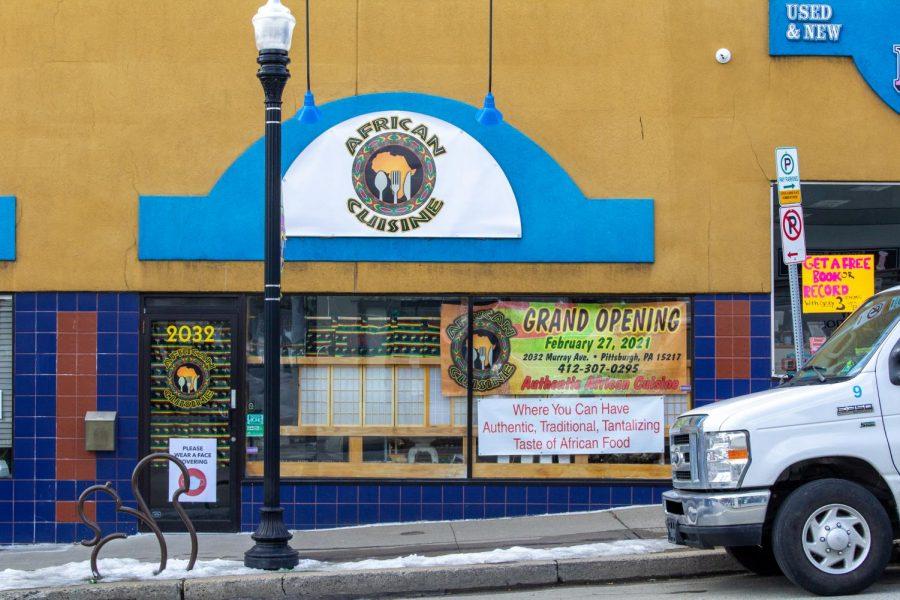 Saudat Lawal, a native of Nigeria who runs the restaurant, decided to open a Nigerian restaurant in Pittsburgh after seeing the lack of options for African food in the City.

“I lived in Rhode Island for 20 years before moving down to Pittsburgh, and I realized after getting to Pittsburgh that there are no African restaurants,” Lawal said. “I realized this was a need that I have been expecting for the longest time, so that’s what really prompted me to do it.”

African Cuisine currently serves over 65 items, with most items originating from West Africa. According to Lawal, the restaurant plans to include cuisine from other African countries on its menu in the near future. Lawal recommends everything on the menu, but she said she has a few favorites.

“We plan to incorporate all other African countries as time goes on,” Lawal said. “I will recommend everything. My favorites are jollof rice and fufu.”

Uchechi Uzoukwu, a sophomore biological studies major, said she is excited to see a Nigerian restaurant opening in Pittsburgh. As someone with Nigerian heritage, Uzoukwu is familiar with traditional African dishes.

“It just takes you out of your comfort zone and you get to experience new things. I definitely think it adds to Pittsburgh and the experiences you can actually have here,” Uzoukwu said. “I think it’s really important that there’s definitely an African aspect around it. That makes me really proud as an African and as a Nigerian.”

Nigerian food differs from some other African cuisine. Nigeria is made up of 36 different states and the seventh most populated country in the world. Lawal said that diversity makes Nigerian cuisine interesting.

“Nigeria is a huge country. In terms of ethnicity, we have various types of food and we can never run out of food — from the northern parts, southern parts, eastern and western parts,” Lawal said. “That is what makes Nigeria special.”

Uzoukwu shares a similar view of Nigeria’s diverse culture. Uzoukwu said she enjoys seeing how different parts of Nigeria put their own spin on national dishes.

“It is really interesting how you take those different ways of making food and the different cultures that make those foods differently,” Uzoukwu said.

Growing up, Lawal was familiar with the culinary industry — both her parents and grandparents owned a restaurant in Nigeria. Lawal’s sister, Tawakalit Enitan Aderemi, said her family has always shown interest in the restaurant business.

“We want people to know that if you go to this restaurant, we make the best out of the best,” Aderemi said. “ We have a passion for food and to make people happy. We don’t want anybody hungry.”

Many Americans are unfamiliar with traditional African meals. Uzoukwu said she wants African Cuisine to end the stereotypes around African food she experienced when she was younger.

“There are stereotypes surrounding it. One hope that African and Nigerian communities can have, and Pittsburgh when it comes to this restaurant, is that maybe those assumptions of [African] foods, smells and spices will be changed or broadened,” Uzoukwu said.

Aside from owning and managing African Cuisine, Lawal works as a registered nurse. She said planning the restaurant’s opening while balancing her career during the COVID-19 pandemic has been demanding.

“It’s a lot of work. But right now we are planning the grand opening,” Lawal said. “Once you have a system in place, you can hire people and then you can oversee, so that’s my philosophy on that.”

As the first Nigerian restaurant in Pittsburgh, African Cuisine offers residents something new to try. Lawal said she hopes others will share in what Nigerian culture has to offer.

“The best thing is for you to just tell everybody to come visit and see for themselves,” Lawal said. “Because writing stuff down and you reading stuff is quite different from really seeing it and experiencing it. It’s a place where you go and you’re going to have some type of tantalizing taste.”