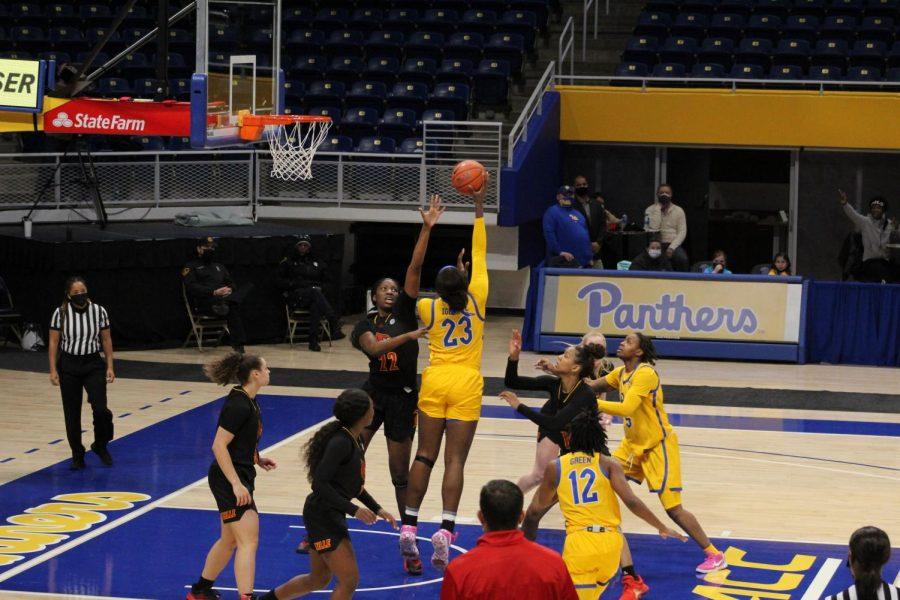 After a turbulent regular season, Pitt women’s basketball entered the ACC tournament with the No. 12 seed and a chance to end the year on a positive note, even without star sophomore guard Dayshanette Harris. But the Panthers failed to play their best basketball in the postseason, falling to the No. 13 seed Boston College Eagles, 67-56.

The first quarter looked flat-out ugly. Both teams combined for 12 total turnovers and just seven total made field goals in the game’s opening period. But the Panthers certainly had the rougher start of the two teams.

Pitt’s star sophomore guard Jayla Everett opened the scoring with a smooth jumper on the Panthers’ first possession. They did not score for the next 7:06 of play. While Pitt ended the quarter on a steal and fastbreak finish by sophomore guard Emy Hayford, it entered the second quarter with as many turnovers as it had points.

But once again, Boston College’s struggles aided the Panthers. Despite seven turnovers of their own, they were able to force the Eagles into five of them, and entered the second period trailing just 14-7. While seven points is an abysmal total for a quarter, a seven-point deficit is far from insurmountable, and Pitt seemed lucky to remain in the game after a three for 18 shooting performance in the first period.

Unfortunately for both teams, even though more shots started to fall, the second quarter was once again plagued by turnovers, and started much like the first quarter. But after the media timeout at the 4:50 mark, Pitt flipped a switch.

The Panthers ignited a 13-0 scoring run over the final 3:18 of the half. Led by 11 second-quarter points from Everett, Pitt found itself down just two points headed into halftime. Even with 11 first-half turnovers and shooting just 11 of 30 from the field, the Panthers remained competitive. Pitt head coach Lance White stressed that the team simply needed to look for Everett, putting her in positions to get good shots.

“I thought during that run, obviously Jayla was a big piece of that run, and we found her,” White said. “It took us way too long, and we had way too many turnovers. You can’t win if you don’t get shots up.”

Boston College’s equally poor performance also helped, with 10 turnovers and an even worse seven of 29 shooting mark in the first half of play. Junior guard Cameron Swartz essentially carried the Eagles, scoring their first nine points of the game and ending the half with 20 of their 28 total points.

“[Swartz] really elevated her game, and she’s been playing extremely well,” White said. “Obviously, sending her to the free throw line 16 times, those are easy ones. We want to make her work for them, but we just fouled her.”

Pitt entered halftime having made five of its last five field goals, but could not carry this momentum into the second half. The Panthers did not score a point between the 8:18 and 4:11 minute marks of the third period, but once again, Boston College did not truly capitalize.

But the extra possessions eventually added up. Pitt’s turnovers continued to pile up, and even though the Eagles scored with low efficiency, these extra opportunities translated to a 47-38 Boston College lead heading into the final quarter.

“If we can’t guard them, we just foul them,” White said. “We have to understand the value of possessions.”

To the demise of the Panthers, the Eagles finally caught a hot hand offensively in the fourth quarter. They started the period on a 12-4 scoring run, and while Pitt battled back late, its failure to protect the basketball and score efficiently ultimately ended its season. The Eagles advanced to the next round, with a 67-56 win. Swartz finished with 33 points.

“With 20 fouls and 22 turnovers, you can’t expect to compete and win,” White said.

Coach White looked to the future in the post-game press conference, and still views this past season as one of progress despite Pitt’s struggles.

“Now, I think we have talent that can compete, and I think we used this year so much as a year to compete for respect,” White said. “Again, I think we got some respect in how we played. Now, we have to learn how to win.”

Jayla Everett shined as the lone bright spot for Pitt, with 22 points, three rebounds and three assists. As a team, however, the Panthers put forth a very poor performance, shooting 19 of 57 from the field, and turning the ball over 22 times. While a painful way for White and his group to end the season, the loss proved characteristic of the struggles that have plagued the team all year.