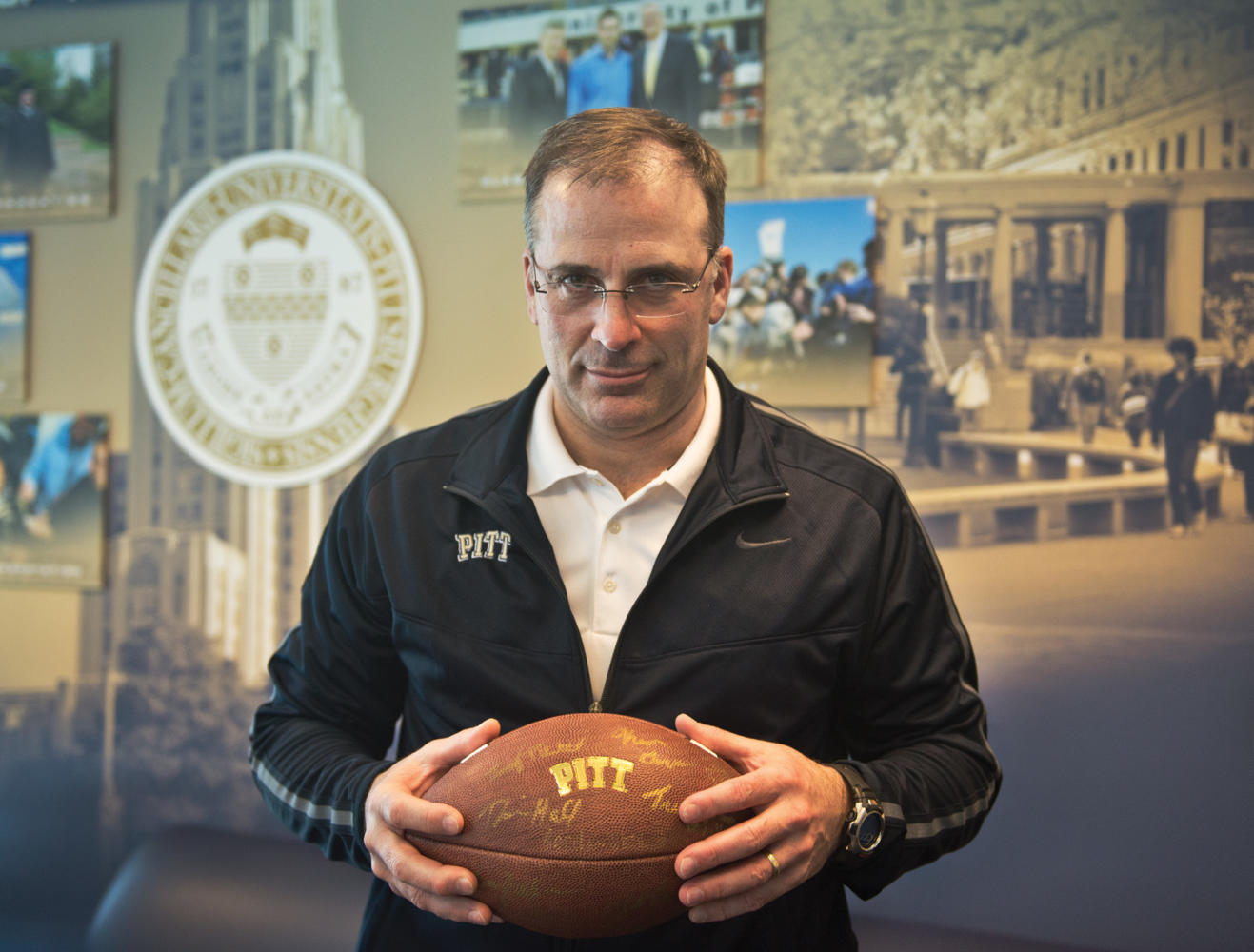 Since acting athletic director Randy Juhl introduced him as the 36th head coach in Pitt football history Dec. 26, Pat Narduzzi has injected some newfound vigor into the program. The Pitt News sat down with the Panthers’ new play-caller in early March.

The Pitt News: While you aren’t technically from Pittsburgh, you are from close by, hailing from Youngstown, Ohio. How much did that factor into your decision to go after the Pitt head coaching job?

TPN:Your dad, Bill, was a very successful coach at Youngstown State. How much of an impact did he have on your aspirations to become a coach and your coaching style in general?

PN: He had a major impact. Growing up in a family of six, I grew up a little guy just running around the football field wherever we lived. Being a ballboy on gameday [for him], just being around it, I loved it. We use a lot of the same coaching techniques, fundamentally and motivationally. He was a big emotional guy, a pretty intense guy. He always had this big vein. I don’t think I have the vein he had, but his old players used to say when that vein used to pop on the side of his neck, watch out. I don’t think anyone’s ever said anything about my veins.

TPN: What was the experience like of playing for your dad at Youngstown State for one year in 1985?

PN: Oh boy. It was rough. I was a freshman. Me and another player, Jerry Pacifico, both started at linebacker as freshmen. Sunday film review was not fun, let’s put it that way. I got ripped every Sunday, and I wouldn’t talk to him until maybe Wednesday or Thursday. He was my position coach, as well as defensive coordinator and head coach. But it was one of the best years of my life, because you’re with your dad every day, and the only reason he yelled at me was to make me better. It’s a good lesson to all young players. It was hard, but it made me a better player and a better person.

TPN: After you left Youngstown State after that year, what was your journey like after that? Did your father’s battle with Hodgkin’s disease [lymphoma] play into it?

PN: [My father’s Hodgkin’s disease] was a factor. I was going to try to get as close to home as possible. I was three hours away from him, as far as a drive from University of Rhode Island to Teaneck, N.J., so being close to home was important, and I found the best fit for me athletically and academically, as well as being close to home as I could be, so it worked out in the end, that’s for sure.

TPN: You have your master’s degree from Miami University (Ohio). What is that degree in?

PN: It’s in sports studies. So you can ask, “what’s sports studies?” It was really more of sports psychology. It was a great major. Robin Vealey was a teacher I had for a lot of classes, but it was really psychology of sport, although it’s not titled that. I probably enjoyed my two years there more than my four years of undergrad. It was just interesting, and it was a field of study that I was getting really into, as far as my career, so it was great.

TPN: You’ve really embraced social media to the fullest extent. In what ways do you think usage of social media can benefit the program?

PN: You know what, I don’t know ... We’re just trying to get out there. That’s for you guys to decide how much it’s benefited. I don’t look at it very much. I don’t read many of the things after they’ve been sent. I just kind of post some stuff to let people know what we’re talking about, what we’re doing and what’s happening in the program, so I don’t really know. Some other people in the office get excited when they see likes and favorites and all that stuff, but I want to recognize our kids. I think it’s important. We need to put the University of Pittsburgh out there. People need to know how well we’re doing. Like last night, tweeting at the ACC All-Academic basketball players we got, those three guys. And it was nice to get a message back from those guys saying “Thanks, Coach,” even though I’m not their coach. But, to me, those are important things, and we need to recognize those, just like birthdays. We send out tweets for our kids’ birthdays. It’s important. At Michigan State, for years, I tried to get us to tweet them out. Coach [Dantonio] always had this thing where we could recommend things, and I always said they don’t want to get birthday cards on our Michigan State stationary. But kids like [social media]. To me, if we can get it out there and kids are looking at it, then they’re finding out about University of Pittsburgh football.

TPN: What’s the story behind the “Pitt Is It” tweets that the Pitt fanbase enjoyed so much?

PN: We haven’t had one for a while. We need to get another one of those. Basically if you got a coach or a player to commit, we can’t go out and publicize it. So it was a way to get out there and say, “Hey, Pitt’s having a good day today,” and that something happened. It’s something I’ve seen done in the past at other schools, and I said when I become a head coach, I want to let people know that something’s happening, and they can try to find out what it is.

TPN: Obviously one of the goals of this staff is to turn Pitt into the premiere football school in the state of Pennsylvania. You guys are going to be restarting the rivalry with Penn State in 2016. How excited are you to kick off the rivalry again?

PN: No more excited than I am to open up on Sept. 5 against Youngstown State. It’s just another game. I think the fans would like to make more of it. I think maybe the media has made more of it than it really is. I think, initially, when Coach [John] Peterson tweeted out something like that [regarding Pitt being the state’s premiere football school], I’ll give you the inside scoop: It was really his 16-year-old son who tweeted that out for him, but I don’t think his 16-year-old son meant for it to be that. I think his son’s enthusiastic that his dad got a new job and is excited about the University of Pittsburgh and said that it was the premiere school in the state without really thinking about it. But we’ve got a great university. We’re really tough about our place. I think it was just saying how great we think this place is. But the game is just another game. We’ll deal with that the week of the game, but we’ve got a long time ‘til that. 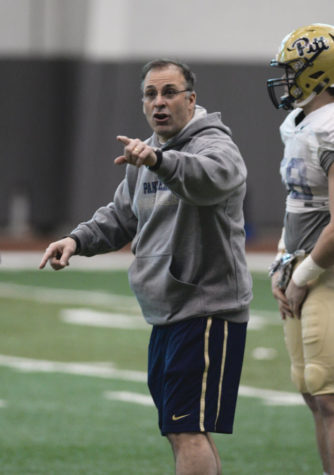 TPN: In your 25-plus years of coaching, which players stick out as some of the best players you’ve ever coached?

PN: There are different types of players. At every school, you have a favorite that makes you go, “Wow, that guy was amazing.” The guy who had the best motor I ever coached, that made me go, “Wow, if I had 11 guys like that ... ” was [defensive end] Trent Cole, who I coached at Cincinnati. He was one of those guys, when you talk about playing like you practice, that guy, the way he practiced was the way he played. I’d be able to compare him to other guys that didn’t practice well, and they think they’re going to be gamers, but they play the same way they practice. So he had one of the best motors I’ve ever coached. Looking at other great players, Jerel Worthy, who got drafted by the Green Bay Packers, and Darqueze Dennard, who was just a true football player who was drafted as a corner with the Bengals. Also [current NFL draft prospect] Trae Waynes was probably one of the smoothest, fastest corners, probably faster than Darqueze but not as great a blitzer, but just a phenomenal football player, and will probably be a first rounder. You can go on and on and on. There are special guys every coach has. There was a guy at Rhode Island, Frank Ferrara, who played five years in the league. We got him from Milford Academy, and when we got him — he’d be embarrassed if he read this — he couldn’t do a jumping jack. But we took this guy from way down there and got him all the way there [to the NFL] and he spent five years with the New York Giants. People said there was no way, but he did it, and he was another one of those motor guys who you could never tell him no. So there were great ones everywhere you’ve coached, so I can’t wait to find out who the next one is here.

TPN: Speaking of former players, you’ve been on the college coaching staffs for two big names in this town, Ben Roethlisberger at Miami (Ohio) and Le’Veon Bell at Michigan State. What were they like in college, and what’s it been like to watch them develop into what they’ve become for the Steelers?

PN: Ben, back in 2003, I spent a season with him — just a super person. There are things you remember about Ben. No. 1 is that I learned a lot about football from Ben. You know, coaches learn from players just as much as players learn from coaches, it’s not just a one-way street. We’re always learning from players, but I learned a lot from Ben in terms of what he does and how he does it, which can help us out on defense. But he was just a super kid, one that you could talk to all the time. Before every game, Ben used to run around the field and throw balls into trash cans 50 to 60 yards downfield and put them right into the trash cans. That was like his pre-game routine, before everyone else came out, just in his pants and a T-shirt. Also, he actually babysat the kids that lived across the street from us. He was just a super person. And Le’Veon is the same way. We recruited him, saw him go all the way through his junior year, carrying the ball 300 times. He was just a war daddy — you talk about a beast carrying the rock, and leaping over people. Just a fun guy to coach. Both of them, never a problem. It’s great to see that you can be good people and also be great players, too.

TPN: You’ve coached mostly from the press box recently at Michigan State. How excited are you to return to the sidelines, and what kind of energy can fans expect out of you on Saturdays?

PN: My wife says I better calm down as a head coach. I’ve actually done both. I’d usually spend three quarters in the press box and would usually be able to get downstairs. Now, in the head coach’s role, it’s a little bit different. There will definitely be emotion on the sidelines. I probably won’t be able to control myself, but I hope the cameras aren’t on me when I can’t. So I probably have to learn to control it a little bit, but I’m an emotional guy.