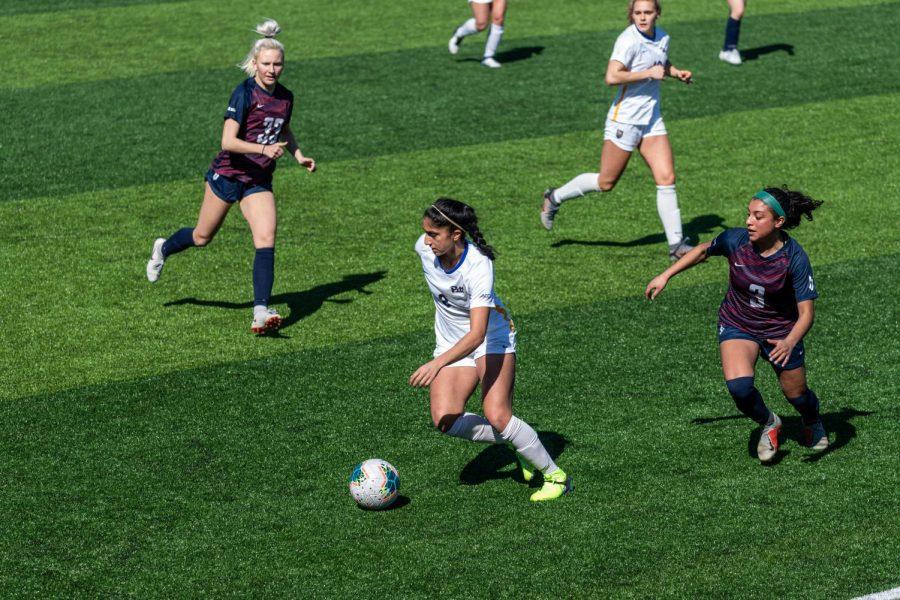 Pitt women’s soccer played its first game since Nov. 1, 2020, at Ambrose Urbanic Field on Sunday. The Panthers defeated their crosstown rivals, the Duquesne Dukes, by a score of 3-0 with turf-blackened snow lining the walls of the stadium.

Assistant coach Ben Waldrum said that regardless of the final tally, the players felt great to be back on the pitch.

“I think our kids were really eager to get a game in,” he said. “Springtime isn’t the easiest thing in the world, but it was good to get back on the field today.”

Pitt allowed family members of players on both teams to attend the first match between the two City Game rivals since 2018. Waldrum knew that scheduling this game would have obstacles, but would be worth it to see the Panthers and Dukes on the field together.

“We’ve been looking to add them as a regular game, but it’s been tough early on,” he said. “We’ve had contracts to honor, but we know the City Game is important, and everyone likes to see it.”

The game started off slowly, with neither team registering a shot until Duquesne did in the eighth minute. Despite that, the Panthers pressured the Dukes with several opportunities in the first 30 minutes. Duquesne’s junior goalkeeper Megan Virgin made several stops, including on Pitt’s first shot of the game in the 32nd minute off the foot of first-year forward Chantelle Parker.

However, the Dukes’ defensive wall eventually gave way. A Pitt corner kick in the 38th minute deflected off a Duquesne defender and past the goal line. The officials gave the goal credit to sophomore defender Athalie Palomo, which became her first goal of the season.

Duquesne attempted to retaliate soon after the goal, but the Pitt defense snuffed it out and maintained its 1-0 lead into halftime.

Waldrum liked the way the team finished the half more than how it started. But he added that some rust was to be expected after such a long layoff.

“I think, honestly, we got off to a very slow start,” he said. “We looked like a team that hadn’t played a game in four months. But defensively, we had a large share of the ball today, and we forced shots from quite a bit of distance, and we were OK with that.”

The second half belonged to the new kid on the block, sophomore forward and Pittsburgh native Landy Mertz. The transfer from Dayton had multiple opportunities in the first 15 minutes, including one where she put her defender on their backside, and one that went straight into the hands of new Duquesne goalkeeper, junior Bella DeFabbo.

Mertz finally broke through in the 61st minute. After a long pass from first-year midfielder Chloe Minas, Mertz beat the keeper to the ball and put it past her into the empty net for her first goal as a Panther. Pitt now led 2-0, and its defense helped keep it that way. Despite Duquesne registering more shots in the first 70 minutes, most of them came from long distance and very rarely produced second-chance opportunities.

In the 78th minute, the Dukes subbed in their third goalkeeper, first-year Maddy Neundorfer. Two minutes later, Mertz took a pass from first-year midfielder Emily Yaple in the 18-yard box and chipped it into the net. Mertz’s second goal of the match put the Panthers up 3-0.

Surprisingly, sophomore forward and offensive juggernaut Amanda West was held without a point for the first time since the Panthers were shut out against Wake Forest on Nov. 1. She had 13 goals and 30 points entering Sunday. Waldrum, however, was encouraged to see Mertz prove herself as an additional scoring threat. He expressed excitement about the Panthers’ new transfer product.

“She gives us another threat up front,” he said. “Hopefully Amanda West knows she doesn’t have to carry the load offensively, and I think it will only continue to get better.”

The Panthers will only play one more game in the spring, so results like this are critical to convince the NCAA Women’s Soccer Committee to invite Pitt to the shortened Women’s College Cup, according to Waldrum.

“All we can do is win the games in front of us,” he said. “I think the committee has a very difficult job in identifying who the at-large bids would be, so we’re just trying to focus on what we can control.”

Waldrum said after the game that Pitt will return to Ambrose Urbanic Field on March 29 to take on the Kentucky Wildcats, once contracts are made official.