No. 22 Volleyball begins spring slate with four-set win over UVA 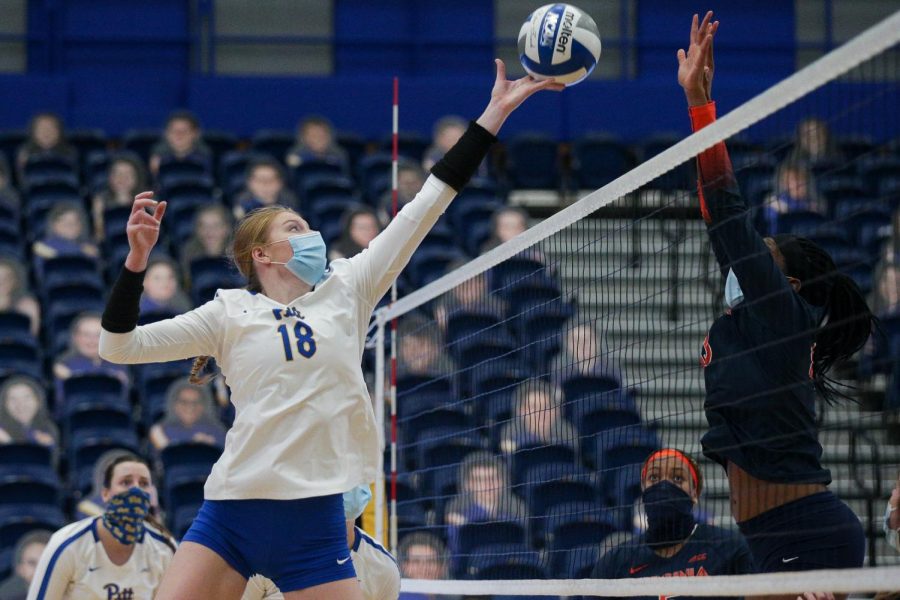 Junior outside hitter Jordan Lockwood (18) had a career-high eight kills during Pitt's 3-1 victory over Virginia on Saturday evening.

By Tricia Caucci, For The Pitt News

No. 22 Pitt Volleyball (5-4) began spring ACC play at the Fitzgerald Field House against Virginia (2-8) this past Saturday. The Panthers came into the matchup with an even 4-4 conference record while the Cavaliers entered winless against ACC opponents. Pitt won the match handily by a final of three sets to one.

Senior outside hitter Kayla Lund, who is second in the league in kills per set, finished the game with 16.5 points and 15 kills, along with 10 digs. Lund was eager to return to the court and shake off some of the rust gained this winter.

“We’ve been waiting a while for this moment, so it’s definitely been anticipated,” Lund said. “I really liked that we got to start ACC play back at home, I think that’ll help us. You know, we came out feeling some nerves and feeling a bit tenser than we would have liked. But I think by the end of it, we kind of started to get our groove and, hopefully, some momentum to carry over into tomorrow’s game.”

The first set was tightly contested with points being shared back and forth. The Panthers and Cavaliers exchanged leads seven times until Pitt gained momentum with a 23-20 lead by way of a 3-0 run. This led Virginia to call a disrupting timeout. But the Panthers finished strong at 25-20 primarily due to major blocks from Lund and junior middle blocker Sabrina Starks.

The Cavaliers came back furiously in the second set, earning the first three points all in succession. Although Pitt responded with 3-0 spurt to retake the lead at 8-5, Virginia overtook the advantage by tying the game at 12-12. The Cavaliers then created a small lead of 14-12 that they refused to relinquish. In the end, Virginia tied the match 1-1.

Senior right-side hitter Chinaza Ndee, one of 30 candidates for the 2020-21 Senior CLASS Award, was frustrated by the Cavalier comeback.

“It was frustrating because we weren’t playing our best,” Ndee said. “After that, I think we kind of just came together. We weren’t trying to make it a ‘play not to lose a situation,’ when what we wanted was to be more aggressive and make better decisions and work through some of the kinks. And I think that adopting that aggressive problem-solving mindset really helped us.”

Head coach Dan Fisher said it took the Panthers a while to adjust to Virginia’s game plan, but he was pleased with how his team finished.

“Well, we knew they had some good players that would challenge us,” Fisher said. “So the biggest surprise was that they were hitting the ball really high over the net, which we weren’t expecting. So, it took our block a while to adjust. They put some pressure on their serve causing some problems. But I thought we definitely ended the game playing our best volleyball.”

The Cavaliers scored the first few points of the fourth set. Pitt fought back to take the lead and eventually ended the match with a 9-1 run with the final moments. Blocks from Starks and junior right-side hitter Jordan Lockwood closed the set and thus the match.

Pitt will continue its abnormal spring schedule on Monday when it takes on No. 18 Georgia Tech (8-1, 8-1 ACC) at the Fitzgerald Field House beginning at 5 p.m.

Ndee spoke of her team with enthusiasm, but wants her teammates to maintain an underdog’s edge throughout the spring season. She’s looking forward to next week’s top-25 matchup versus the Yellow Jackets.

“The main thing is having a kind of scrappy mentality,” Ndee said. “We want to make sure that we come out and match that fire. I think what it comes down to is just how gritty we are going to be. We’re excited — [Georgia Tech is] a really good team. So it should be a good time.”