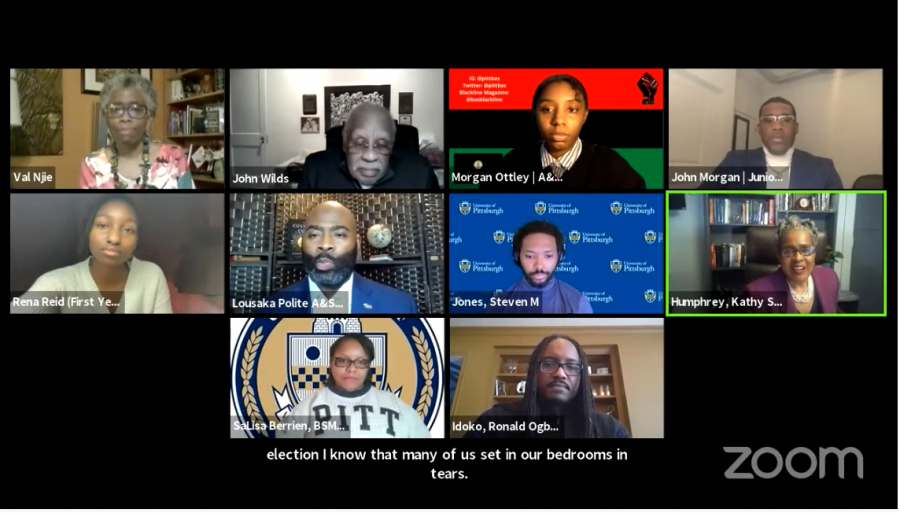 A panel met in the evening on Feb. 24 to discuss how the University has and should continue to improve the Black Pitt experience. Clyde Wilson Pickett, the vice chancellor for diversity, equity and inclusion, introduced the annual Black History Month event, hosted in honor of Pitt’s very own K. Leroy Irvis.

By Priya Ray and Ashton Crawley

Rena Reid, a first-year pharmacy student, said she was relieved to find such a strong community of Black students at Pitt.

“All my life I’ve always felt outside of some box — I never thought I’d have a community anywhere,” Reid said. “I expected the same at Pitt, but instead found such a strong Black community here. People will always work to support you no matter what.”

The Office for Equity, Diversity and Inclusion, the University Library System, the Office of University Communications and Marketing, Pitt Athletics, the African American Alumni Council and the Pitt Alumni Association hosted the event, which focused on the Black Pitt experience.

Morgan Ottley, the president of the Black Action Society, moderated the panel, along with Ron Idoko, diversity and multicultural program manager in the Office for Equity, Diversity and Inclusion. Ottley, a senior neuroscience major, began the open discussion by questioning the meaning of “blue, gold and black” in the context of Black Pitt.

SaLisa Berrien, who graduated from Pitt in 1991 with a degree in mechanical engineering, said the phrase points to the various obstacles Black Americans had to overcome to achieve as much as their white counterparts.

“To me, it means making something out of nothing,” Berrien said. “Typically, our community’s people start miles behind others in the race to the finish line — and yet, we still manage to finish strong.”

As a first-generation college student, Berrien credited much of her success to the support system she found among other Black students and faculty in the now-defunct IMPACT program in the School of Engineering. For more than 50 years, the program encouraged “culturally disadvantaged” groups to pursue engineering at Pitt. Currently, Pitt EXCEL for undergraduates and INVESTING NOW for pre-college students exists in its place.

“What was most impactful for me was being a part of the IMPACT program, which provided me counseling in times of need,” Berrien said. “I was a nontraditional student who arrived at Pitt with a 3-year-old child. If that program had not been in place, I probably would’ve dropped out of school.”

The event is hosted annually in honor of K. Leroy Irvis — the first African American to serve as speaker of the Pennsylvania House of Representatives. Irvis graduated from Pitt’s School of Law in 1954 and became the first Black assistant district attorney in Allegheny County. The University’s Irvis Hall, a residence hall for upperclassmen, was also named after him.

Clyde Wilson Pickett, the vice chancellor for diversity, equity and inclusion, introduced the event and added that Irvis is a vital figure in Pitt’s history.

“Irvis is one of our most important and influential graduates, and certainly one of the most influential men in the history of the state of Pennsylvania,” Pickett said. “The theme of this program — blue, gold and black — gives us an opportunity to reflect on the experiences of our students and our community members throughout the years.”

In a partnership with the University Library System, the Office for Diversity, Equity and Inclusion announced during the panel that it is working on a new online resource dedicated to the Black experience at Pitt. The new digital space will include materials contributed by the Pitt community — including the African American Alumni Council, students, faculty, staff and alumni.

Chancellor Patrick Gallagher briefly spoke at the start of the event in a pre-recorded video. He said the violence from law enforcement against the Black community is a “painful reminder that systemic racism is deeply rooted in this country.”

“What I’m hearing from the Pitt community, specifically our Black and African American colleagues, is a combination of hope and weariness,” Gallagher said. “There’s hope that a community like Pitt, dedicated to the betterment of society through knowledge and education, can and will step up and advance racial justice on our campuses and beyond.”

Kathy Humphrey, the senior vice chancellor for engagement and secretary of the Board of Trustees, said she is proud of the students who are trying to make a difference. BAS released a list of demands to the chancellor’s office in summer 2020. The list included the implementation of a mandatory Black studies course, an increase in the hiring of Black tenured faculty, more scholarships for Black students and the installation of new masters and Ph.D. programs in Africana Studies.

“Most of the students who contributed to the list were soon to graduate,” Humphrey said. “They knew they wouldn’t see those demands accomplished in their time at Pitt, but they were thinking about the future Black students at Pitt.”

The University agreed to some of these demands and now requires all first-years to take a Black studies course. In addition to this, annual anti-racism training is now required for all professional staff and student workers.

Humphrey said it’s important to hire more Black faculty at Pitt — which was mentioned in the action plan released last summer — in helping to represent Black students and change the way we approach Black issues. As of October 2019, Pitt is made up of 3%-4% Black faculty in comparison to its 70.9% of white instructors, placing the University in the bottom third of 34 public colleges surveyed in a Racial Equity Study.

“I want to ensure that the complaints I had long ago are not the same complaints students have today,” Humphrey said. “ We all have a responsibility to make Pitt a better place for African American students.”