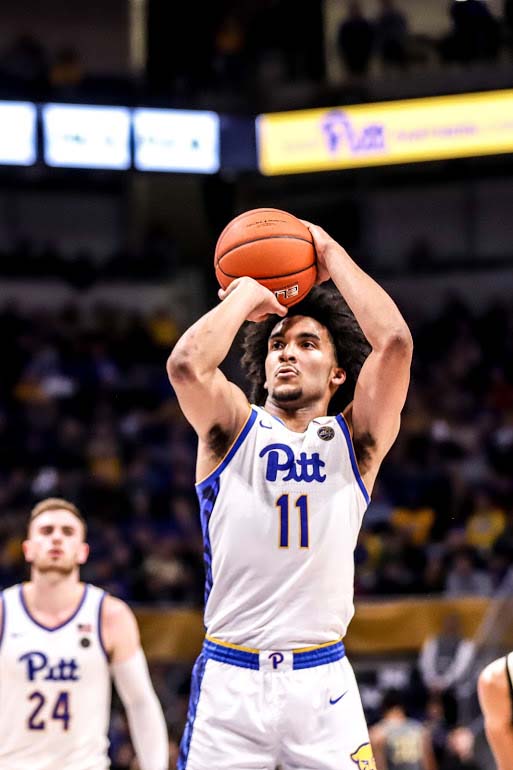 Pitt star forward Justin Champagnie announced on Tuesday that he will "test the NBA Draft process."

After a long and bumpy ride, the ACC men’s basketball regular season has finally come to an end, and there will be no shortage of storylines as the ACC Tournament approaches. The matchups were finalized after the completion of the regular season on Saturday night.

Throughout the postponed games, eye-opening results and breakout performances, one theme rang true throughout the regular season — inconsistency.

In years prior, the ACC has been known to be home to some of the most dominant teams in the nation. From the Zion Williamson-led Duke to the still-defending national champion Virginia Cavaliers, the conference has consistently boasted multiple teams who could feasibly win it all heading into the NCAA Tournament.

But just like so much else throughout this tumultuous 2020-21 campaign, the unexpected has become expected.

This truth is apparent when looking at the seasons of traditional national powerhouses Duke and North Carolina. In past seasons, the blue bloods have been virtual locks to make an appearance in the Big Dance, and are generally tagged with conference championship expectations heading into the annual conference tournament.

But as both teams head down to Greensboro, NC, for the start of the ACC Tournament, neither is expected to do much damage.

Duke (11-11 overall, 9-9 ACC) has struggled to find any level of continuity throughout the season, as Duke head coach Mike Krzyzewski’s squad heads into the ACC Tournament with more questions than answers. Led by sophomore forward Matthew Hurt, the Blue Devils have been one of the streakiest teams in the country all season long.

Just as it looked as though they may have found their footing after knocking off then-No. 7 Virginia and Syracuse in successive games, the Blue Devils reeled off three consecutive losses to the likes of Louisville, Georgia Tech and North Carolina.

Duke heads to Greensboro as the 10th seed and will face the 15th seed Boston College Eagles on Tuesday.

North Carolina (16-9 overall, 10-6 ACC) has fared slightly better than their intra-state rivals, but even they couldn’t seem to separate themselves from what are typically inferior conference opponents. While the Tar Heels picked up a marquee win against No. 11 Florida State, their underwhelming performances against NC State and Marquette have served as reminders that this is not the same Roy Williams-led team that won a national championship just four years ago.

While No. 21 Virginia (17-6 overall, 13-4 ACC) successfully captured the ACC regular season title and the top seed in the tournament, they have had their fair share of question marks as well. The Cavaliers are just two weeks removed from a three-game skid during which they lost their place on the ACC mountaintop to No. 11 Florida State.

But as we have learned from watching ACC basketball in 2021, nothing stays the same for too long. Florida State dropped a stunning affair at the hands of Notre Dame on the final day of the regular season, re-elevating Tony Bennett’s squad back to the No. 1 spot.

For the Pitt Panthers (10-11 overall, 6-10 ACC), the ACC Tournament comes at the end of a regular season in which the squad showed glimpses of their potential, but ultimately came to a screeching halt after once holding a record of 8-2. The Panthers’ late-January defeat at the hands of Wake Forest marked the beginning of a stretch in which they lost nine of their final 11 games.

While Pitt has had their fair share of issues on the court, their off-court complications have been the biggest factor as to why they head to Greensboro as the No. 12 seed in the conference.

Heading into the 2020-21 season, first-year forward John Hugley was seen as a key missing piece to the puzzle that was Pitt’s rotation of big men. Hugley, ranked 98th on the ESPN top-100 recruit list for the class of 2020, was projected to develop into a potential starting five player who could fill the void Pitt had down low and match up with the other athletic frontcourts in the ACC.

Unfortunately for head coach Jeff Capel and company, Hugley ran into legal troubles due to an incident that occured in the offseason, and was indefinitely suspended in mid-January. He has not seen the court since.

Additionally, after dropping a tight affair to the hands of conference powerhouse Florida State, junior guards Au’Diese Toney and Xavier Johnson announced that they had played their final game with the Panthers and would enter the transfer portal effective immediately. The two combined for 28.6 points, 9.3 rebounds and 63.6 minutes per game — leaving a monstrous void on both sides of the ball.

After two of their most prolific playmakers left the program within 25 hours of each other, the Panthers have since gone 1-2 after defeating Wake Forest and dropping back-and-forth games to Clemson and NC State.

Filling the opening left by Toney and Johnson has largely been by-committee, but senior forward Nike Sibande has been a centerpiece in those efforts. Sibande has seen a drastic spike in minutes since the departure of the two guards. He has seen the floor in Pitt’s four previous games more than in any contest prior. First-year guards William Jeffress and Femi Odukale have also seen a jump in play time.

Pitt will take on the 13th-seeded Miami Hurricanes (8-16, 4-15) to open up its tournament run on Tuesday at 2 p.m. The Panthers defeated Miami last December in Coral Gables by a score of 70-55 in the teams’ one previous matchup this season.

While the Johnson- and Toney-less Panthers have dropped out of the ACC hierarchy thanks to their recent losing stretch, there is some hope for Pitt. With the exception of a 26-point blowout at the hands of Notre Dame, the Panthers have not lost a game by more than 10 points this season. Even without two of their best players, Jeff Capel’s squad has managed to remain fairly competitive, even throughout all the trials and tribulations of a one-of-a-kind regular season.

If the Panthers can knock off Miami for a second time this season, they get a rematch with the fifth-seeded Clemson Tigers on Wednesday.