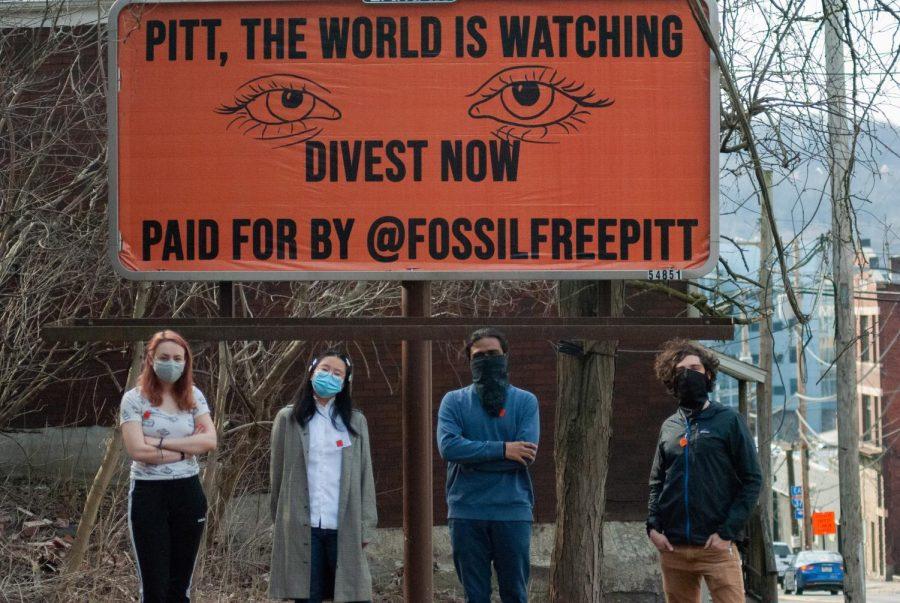 Nick Suarez made clear the Fossil Free Pitt Coalition’s stance on the Board of Trustees’ recent decisions regarding fossil fuel divestment.

FFPC’s years of protests, occupations and presentations culminated in a Board vote on the afternoon of Feb. 26. The Board of Trustees voted to adopt all of the suggestions made by its ad-hoc committee on fossil fuels regarding the University’s divestment of the endowment from fossil fuels.

The Board of Trustees formed its ad-hoc committee on fossil fuels last June to address student concerns surrounding divestment and investigate the University’s continued investment in fossil fuels. After several months of hearings from investment experts, students, faculty members and financial advisors, the committee published its findings and suggestions to the Board on Feb. 19. It recommended the Board gradually divest by 2035 to avoid between $65 million to $100 million in financial losses, as well as committing to increased transparency with future investments. Suarez said the plan for divestment is “too slow.”

“The intergovernmental panel on climate change estimates that we have until 2030 in order to take drastic action on climate change,” Suarez said. “The timeline the Board is laying out says we’ll be down to 1% of our endowment, which is still a lot of money, by 2035. They’re doing far too little and they’re doing it far too late.”

But for FFPC, Suarez said this outcome was not at all what it was looking for. Suarez, a fourth-year physics and astronomy doctoral student, said the Board’s final decision wasn’t really changing much in terms of divestment.

University spokesperson Kevin Zwick said the Board will continue to update the Pitt community on the state of its fossil fuel investments.

“The Board of Trustees was clear that they expect an ongoing engagement around fossil fuel investments, and continued progress on reducing these investments will be monitored by the investment committee and shared with the Pitt community,” Zwick said.

Ellen Oordt, another member of FFPC, said members expected this kind of response from the Board, but it disappointed them nonetheless.

“Honestly, I’m not surprised that the Board decided to go that way,” Oordt, a junior ecology and evolution major, said. “But honestly it feels really bad because we put in a lot of hard work to advocate for immediate divestment. Then they pose it as some great achievement that they did, in a very self-congratulatory way.”

Carey Treado, a lecturer in the economics department, agreed with FFPC’s conclusion, adding that a changing investor demographic could lead to a decreased interest in fossil fuel investments — and thus a drop in their value.

“The financial industry is very influenced by the movement towards sustainable investment because the group of people who are their next source of investment dollars are millennials,” Treado said. “The boomers are taking their money out of their retirement account and the millennials are putting money in, so they want to be able to market to those consumer preferences.”

Following the FFPC sit-in at the Cathedral of Learning last spring, the Board of Trustees finally acknowledged the coalition’s demands through the creation of its ad-hoc committee. Suarez said FFPC hoped the Board would come to the decision to divest immediately.

But after the Board’s vote on Feb. 26 to continue gradual divestment by 2035 — an outcome that opposes the FFPC’s goal of immediate divestment — members have been forced to start their lobbying efforts all over again from a new angle.

Oordt said FFPC will shift away from the more bureaucratic methods it’s been using to try to achieve divestment over the past few years.

“We’re tired of engaging with Pitt as a university through these institutional means of communicating, through ad-hoc committees and going to Board meetings,” Oordt said. “From the past couple of years on this campaign all of these things that the Board of Trustees provides for Fossil Free Pitt to communicate with them have all been pretty performative.”

Oordt did not specify what FFPC’s new approach to achieving divestment would be, but Suarez said FFPC is looking to shift its focus from just divestment to looking at where the money divested could be reinvested back into the Pitt community.

As far as future actions, Suarez said FFPC plans on collaborating with groups such as the Democratic Socialists of America Ecosocialists, Pittsburgh Sunrise and Free the Planet @Pitt for a climate strike on March 19. It also plans on taking part in an Earth Day action in collaboration with the College Climate Coalition, a network of divestment campaigns from college campuses across the country.

Suarez said just because the Board has finalized its decision, that doesn’t mean the work of FFPC is done.

“To use one of our taglines — ‘We’re still here,’” Suarez said. “Fossil Free Pitt’s not going to dissolve away because the Board has not seen reason and made the right choice.”

Suarez is a former digital writer for The Pitt News.