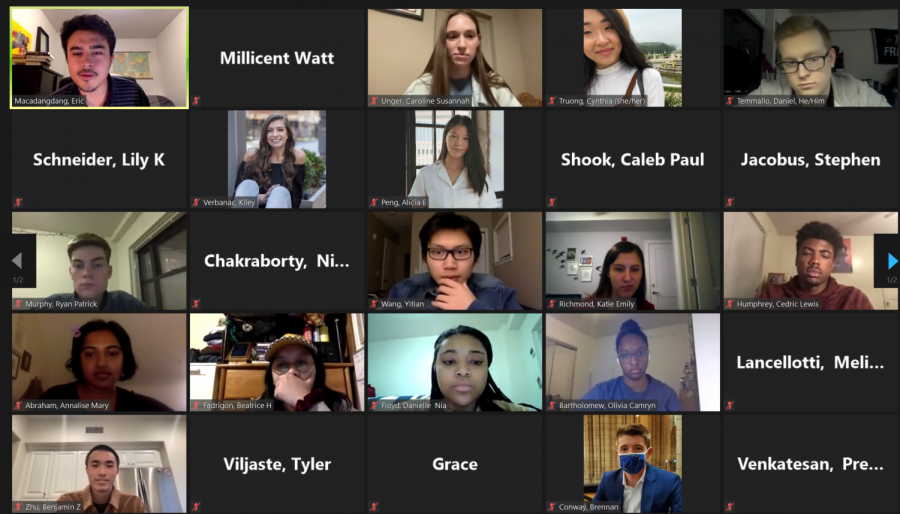 Pitt’s Student Government Board announced the formation of an Elections Procedures Review Task Force at Tuesday night’s meeting on Zoom. SGB created the task force in response to the events of last week’s election and will review the board’s elections code and respond to questions and concerns from the Pitt community.

On election day, the Vision slate was disqualified after rival presidential candidate Tyler Viljaste filed an infraction against the slate for hanging up unapproved posters and handing out slate-branded shot glasses in a first-year residence hall. In response, many Pitt students threatened and harassed Viljaste and his slate to voice their frustrations. Harshitha Ramanan, an independent presidential candidate, won by 1,222 votes over Viljaste.

The task force will review areas such as the elections code and hearing procedures, as well as reviewing various concerns voiced by Pitt students during the election. According to Richmond, the task force’s members “reflect the diversity of thought and perspectives necessary to get a deeper understanding of the past election and the long-term relationship between SGB procedures and the public at large.”

“This task force, we’re going to look thoroughly into exactly what happened, but our focus is mainly to look at the elections code and our policies to make sure that those adequately support the elections committee and their mission to conduct a fair election,” King said.

According to King, in order for the task force to be successful, Pitt students should continue to stay engaged with SGB and reach out with any recommendations or concerns.

Macadangdang said the task force will help improve the elections process so the events of last week’s election will not happen again.

“This task force will bring forth recommendations on improving how elections are run to ensure we do not have to see the level of activity to which we saw last week,” Macadangdang said.

Macadangdang said he and the current board will soon begin the transition to President-elect Ramanan, who did not attend Tuesday’s meeting.

“In the next seven weeks, the current board and I will be working hand in hand with Harshitha and her incoming board on an effective and efficient transition period where we will ensure that Student Government Board’s work and mission is carried on seamlessly into the future,” Macadangdang said.

SGB is hosting a public art competition, where Pitt students can submit designs for a public mural that focuses on justice and equality. Three finalists will receive $250, and have their work voted upon by Pitt students. The first place winner will then receive $750 and the necessary resources for completing the mural.

Macadangdang said Pitt’s campus is in need of new artwork, and the student body will be able to fulfill that need.

“As many of you know, by taking a simple walk through campus and in its buildings, public art is in need,” Macadangdang said. “And we know that our students have the creativity to bring a new piece of art that will draw people’s attention and force people to think about the important issues of equity and justice in this world.”

Aboli Kesbhat, the chair of the allocations committee, said she is working to make allocations more transparent, accessible and updated on SGB’s website, a topic that was brought up at the previous Presidential Debate.

“I’ll also be working on figuring out a more efficient, transparent way to keep allocations numbers up to date on the website,” Kesbhat said. “Additionally, budget dates and forms for the spring will be released on Monday of next week most likely, or next week at the latest.”

Board member Annalise Abraham said the report issued by the Board of Trustees’ Ad Hoc Committee on Fossil Fuels’ in late February “did not fully meet the urgency of the climate crisis on hand” and did not respond to the Pitt community’s concerns. The report recommended that Pitt not completely divest from fossil fuels due to the potential of losing hundreds of millions of dollars. The committee instead recommended to continually decrease investments through 2035, which many Pitt students — SGB included — disagree with.

Abraham said transparency and collaboration from the University is necessary as Pitt shifts its funds.

“I think we all had a mutual understanding for the further need for transparency as the consolidated endowment fund continues to shift,” Abraham said. “We also realize the tremendous opportunity that students and administrators have to collaborate in order to meet our fiduciary goals.”

He said with the COVID-19 pandemic’s one-year anniversary coming up, students may feel that their work at Pitt is “trivial,” but that the work is important for the future.

“I want to underscore how valuable our words and actions and our perspectives are in the grand scheme of things. This all may, at times, seem like trivial work, whether it’s on SGB or elsewhere at the University,” Macadangdang said. “As 18- to 22-year-olds, we have a tremendous part to play in reimagining what this world can be, especially as we hopefully enter into new beginnings very soon.”

The allocations committee received six requests and one request modification for a total of $16,652, and approved $10,520. Four requests required board approval.

The board last week approved $394 requested by Pitt’s Pre-Medical Organization of Minority Students.

Pitt’s Nursing Student Association requested $270 to send members to a virtual conference to learn important nursing and leadership skills. The board approved in full.

Pitt’s NSA also requested $2,000 to send members to a second virtual conference for members to develop nursing and leadership skills, as well as provide a networking opportunity. The board approved in full.

Chinese American Student Association requested $6,055 to invite Anthony Lee to teach a virtual dance class and interact with club members. The board approved the funds with revisions, for a total of $6,000.

Filipino Student Association requested $2,250 to invite AJ Raphael to speak to club members. The board approved in full.