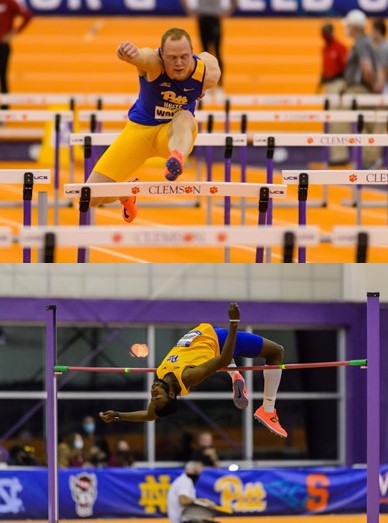 When the NCAA Indoor Track and Field Championships occur this week, two roommates will represent the Panthers on the national stage.

Not only do the two athletes both represent the same school, but they also live together. In a year where no spectators will attend the meet, the two said seeing a familiar face in the crowd will provide them with some much-needed support.

“It’s the dream,” Wolter said. “We talked about it a lot, and to have your roommate and friend going with you, just feels natural.”

Lauray emphasized the importance of their friendship as well, saying that the roommates have set high expectations for themselves as a pair.

“This whole year we’ve been talking about how our house is going to be a legendary household for track at Pittsburgh,” Lauray said. “We all push each other and we have really good chemistry in this house.”

Lauray was part of the first Panther pair since 2014 to qualify for the indoor national championship last season. He didn’t get to compete, though, with the last-minute cancellation of the meet due to COVID-19 concerns — making 2021 the first official participation by two Panthers in seven years.

In order to qualify for the national meet, athletes must have a top 16 score in the nation in their event to earn an invitation — making the meet one of the hardest events to qualify for in all of college athletics.

Pitt has been unable to claim the top spot on the podium at indoor nationals since Pitt Athletic Hall of Famer Lee McRae won the gold in three years straight in the 55m event from 1986 to 1988. Wolter and Lauray hope to end this drought in Arkansas.

Lauray punched his ticket to a second straight trip to nationals with a personal season-best jump of 7’1.50” at the Virginia Tech Challenge, tied as the 14th-highest jump in the nation. Although last year’s cancellation initially disappointed Lauray, he has since moved on and looks forward to competing with some of the nation’s best in the coming week.

“I was really upset at first,” Lauray said. “But I knew I had another chance, so I took it with a grain of salt, and tried to stay ready for the next time I had the opportunity.”

Lauray held himself to this standard this year, achieving First Team All-ACC honors. He continued to work with the idea of returning to nationals in the back of his mind. Lauray believes one of the keys to his success is maintaining a positive mindset.

“I know I have a chance to win and compete well if I compete at my best,” Lauray said. “When the time comes I just have to know I can clear [the bar].”

Alonzo Webb III is an assistant coach with Pitt responsible for working with jumpers and multi-event athletes — making him the positional coach for both Panthers heading to Arkansas. Webb echoed Lauray’s comments on the importance of staying ready for another opportunity.

“He set a standard for himself after last year,” Webb said. “His consistency got him back to the national championship.”

Wolter blew past the field at the ACC championships his first year in the heptathlon — an event consisting of seven different components that are scored and added together for a final score. Wolter’s cumulative score of 5,632 points broke the program record as well and earned him the 11th-best score in the country. This score dwarfed that of the competition at the ACC championship and Wolter claimed the gold — the first time a Panther has ever accomplished this feat as a heptathlete in program history.

The heptathlon consists of seven events over the course of two days. On the first day each athlete will compete in the 60m, long jump, shot put and high jump. The second day consists of the 60m hurdles, pole vault and 1000m. Wolter attributes his record-breaking performance to a combination of rest and a strong second day of events.

“The weeks leading up [to the ACC Championship Meet] I went into recovery mode. I was feeling great going into ACCs,” Wolter said. “Going into day two, my goal was to be on top of the leaderboards.”

Wolter feels that in order to have a shot at claiming the national title, it’s very important for him to be consistent with most of the scores he accomplished in the ACC Championships. But he also feels that he needs to significantly improve upon his score in the shot put event if he wants any chance of claiming the gold next week.

“I need to improve upon my shot put,” Wolter said, “I’m trying to get to around 14 meters. I’ve had a couple of good practice sessions where I have been able to get 14 [meters] every time, and I just need to carry that into competition.”

Despite criticizing his shot put score and first-day total, Wolter sat in second place heading into day two of the ACC Championships with his strongest events still ahead of him. Webb believes that this mindset speaks volumes regarding Wolter’s competitive nature.

“He’s the ultimate competitor,” Webb said. “He is very sure of what he is capable of and expects himself to perform to that standard every single weekend.”

Webb was named 2020-21 Mid-Atlantic Men’s Assistant Coach of the Year by the U.S. Track and Field and Cross Country Coaches Association and credits the hard work and dedication of students such as Lauray and Wolter for earning him that accolade.

“This one’s for the kids,” Webb said. “They worked hard to put me in consideration for [the award].”

Lauray and Wolter have put the work in, and they begin to reap the rewards by having the opportunity to compete amongst the nation’s best this week. But the message from Webb to Lauray and Wolter ahead of the meet is simple — have fun.

“Everyone works really hard throughout the year, you wake up early, you stay up late, you work hard in the hours in between, everyone does that,” Webb said. “This meet is statistically one of the hardest meets to qualify for, once you make it there, that’s the glory. The hay is in the barn, the work is done, now have some fun.”

Wolter and Lauray head to Arkansas with the gold at the forefront of their minds. Wolter will start the first leg of the heptathlon on Thursday at 12 p.m. and will return on Friday at 11 a.m. to finish the heptathlon events. Lauray will jump at 3 p.m. on Friday.