Panthers in the Pros: 2021 Basketball Edition 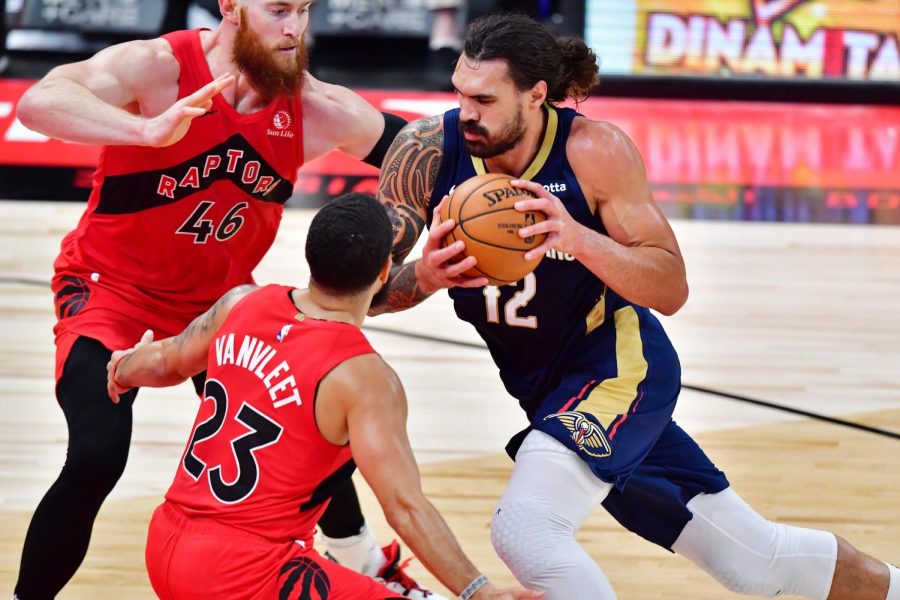 The New Orleans Pelicans' Steven Adams (12) drives to the net during the second half against the Toronto Raptors' Aron Baynes (46) and Fred VanVleet (23) at Amalie Arena in Tampa, Florida, on Dec. 23, 2020.

While Pitt is better known for its talent in the NFL, the Panther basketball program has produced a number of professional athletes in the NBA and internationally. Here’s how the most prominent former Panthers have fared at home and abroad recently.

Originally drafted by the Oklahoma City Thunder 12th overall in 2013, Steven Adams played there for seven seasons before being traded to the Pelicans during a slurry of deals in the short offseason. He has averaged 9.7 points, 7.7 rebounds and 1.2 assists per game over his career and currently averages 8.0 points, 8.9 rebounds and 2.1 assists per game this season in New Orleans.

Adams scored a season-high 15 points on six of seven shooting against the Miami Heat on March 4. He has recently had some nice displays of chemistry with Pelicans forward Zion Williamson, with a series of highlight reel alley-oops and assists between each other before the All Star break. The Pelicans have struggled as of late, losing six of their past 10 games and falling to fourth place in the Southwest division.

Well known for his screen-setting abilities, Adams primarily functions as a fundamental center that unlocks potential in his teammates. He also excels defensively when guarding one-on-one in the post.

A Pittsburgh native, Cameron Johnson transferred to North Carolina from Pitt after his third season. His move to North Carolina turned rocky to say the least, but it allowed him to excel under head coach Roy Williams and the Tar Heels, giving him the spotlight he needed from NBA scouts. The Minnesota Timberwolves drafted Johnson in 2019 as the 11th overall pick and traded him in a deal with Dario Saric to the Phoenix Suns.

Johnson has averaged 9.4 points, 3.3 rebounds and 1.3 assists per game over his 91 career appearances in the NBA. This season, he’s shooting at a 43.7% clip, 37.8% from beyond the arc. Johnson managed to break the franchise record as the fastest player to score 100 3-pointers, doing so in only 54 games.

The Suns currently find themselves on a roll, winning eight out of their past 10 games and currently sitting at second in the Western Conference standings, with significant help from Johnson’s production.

An undrafted Pitt alumni, Brad Wanamaker played with various European club teams from 2011 until Boston Celtics signed him in 2018. Joining the Warriors after the 2020 season, Wanamaker averages 4.8 points in about 16 minutes per game coming off the bench.

Wanamaker had a season high 14 points against the Hornets on Feb. 20, stepping up in the absence of Warriors star Stephen Curry. Golden State has posted a 19-18 record putting them a game behind the Dallas Mavericks for a playoff seed.

Transferring to UNLV his sophomore year after he said he faced difficulties meshing with Pitt teammates, Khem Birch went undrafted in 2014 and played a season in the NBA G League. He then spent two seasons in the European league with Turkey and Greece. The Orlando Magic signed him in 2017 and he’s currently in his fourth season with the team. Birch has averaged 4.8 points and 4.4 rebounds in 16.3 minutes per game over his 175 career appearances.

Birch had a fairly underwhelming February, failing to post double-digit points or rebounds like he had in January, explained by a decrease in playing time. Birch only played more than 20 minutes in three games that month. Considering he played only three games under 20 minutes in January, it’s not surprising his season highs in points and rebounds occurred earlier in the season.

A four-year journeyman with Pitt, Ryan Luther transferred to Arizona in the aftermath of the last season under former coach Kevin Stallings. The forward played his best basketball before leaving Pitt, averaging 12.7 points, 10.1 rebounds and 2.8 assists due to increased usage and minutes.

Luther went undrafted in 2019 and spent some time with the Latvian club BK Ventspils. He now plays for Darussafaka Basketbol Istanbul, averaging 7.1 points and 5.5 rebounds per game in 23 appearances.

James Robinson played from 2012 to 2016 for the Panthers, excelling in his senior year with 10.2 points and 5.0 assists per game. Receiving little attention from NBA franchises, he played with the German club Medi Bayreuth and BC Igokea of Bosnia.

Robinson currently plays with the German club Basketball Lowen Braunschweig, signing with the team before the 2021 season. He averages 11.2 points and 5.5 assists per game this season off 29.8 minutes per game.