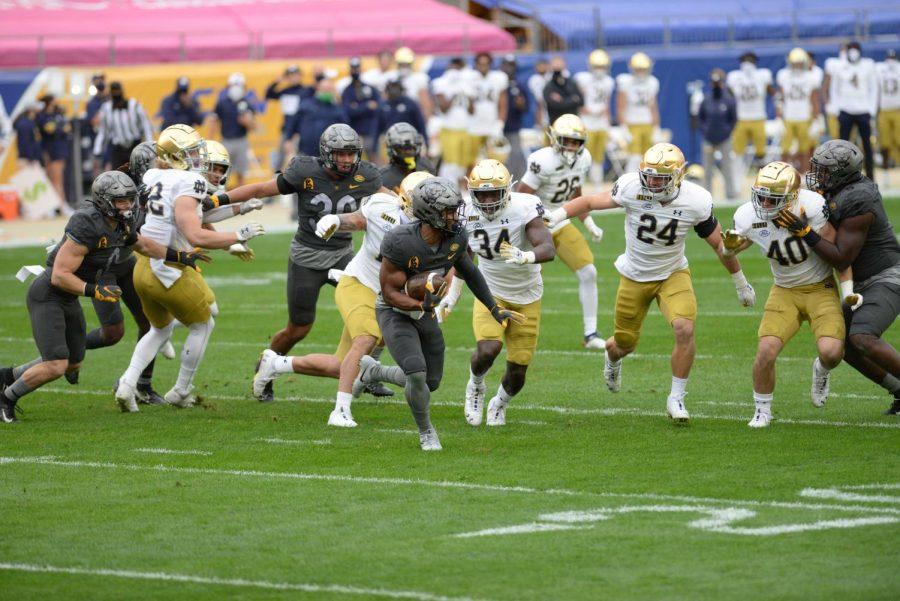 St. Patrick’s Day has next to nothing to do with college football, but this year is an exception.

Panther fans should take this day to remind themselves of Pitt football’s continual struggles against the Notre Dame Fighting Irish. The Panthers haven’t notched a win against the Golden Domers since 2013, and Pitt won’t see any more success until they embrace the rivalry.

While Pitt fans constantly hype matchups with Penn State or West Virginia, they don’t seem to appreciate the connection Pitt has with the school in South Bend, Ind. This mistake can be largely attributed to Notre Dame’s confusing conference alignment during football season.

The Fighting Irish usually compete as a conferenceless entity in football, but a condensed COVID-19 schedule forced the Irish into the ACC last season. No strangers to the teams in the conference, Notre Dame routinely schedules 5 ACC matchups a year, and used its familiarity to bully the entire conference in their first year as official competitors.

The Irish struck gold this year, going 9-0 in regular season play before falling to Clemson in the ACC Championship. Pitt, on the other hand, trudged through an underwhelming 5-5 season in the conference.

The difference between Notre Dame and the rest of the conference became clearest in their Oct. 24 match up against Pitt, when the Irish walloped the Panthers 45-3, the most lopsided defeat of the season. While injuries limited the Panther’s offensive output for sure, the team never stood a chance.The memory of the beatdown should ignite a fire in Panther players and fans alike.

The Pitt versus Notre Dame series has all the markings of a great college football rivalry, but for some reason hasn’t met the hype. Both teams have tremendous histories — Notre Dame claims 11 national titles compared to Pitt’s nine. They both rank in the top 10 for consensus All-Americans produced — Notre Dame with 104 to Pitt’s 53.  They’re close enough in location to garner significant away crowds in their home stadiums. Most importantly, they play each other more often than Pitt’s other rivals, meeting at least once every three years since 1982.

Some of those meetings will forever be ingrained in Panther and Irish record books alike. Tony Dorsett helped end the Panthers’ 11-game losing streak to Notre Dame in 1975, rushing for 303 yards. Pitt’s Tyler Palko became the first QB to ever throw 5 TDs against the Irish in 2004. Notre Dame also played its longest game in a quadruple OT loss to the Panthers in 2008.

The Irish have historically dominated the series where it matters most, in the win column. The Irish lead the series  49-21-1. The Panther’s ineptitude versus the Irish is markedly worse than their 53-43-4 record against sworn in state rivals, Penn State.

The Panthers of late have done little to even that margin. Pitt head coach Pat Narduzzi has gone 0-3 against the Irish since his hiring in 2015.

With the status of the Pitt-Penn State rivalry up in the air, the Panthers should focus on making Notre Dame its second-most-anticipated rival. The framework is there, all that’s necessary is a fiery Panthers team to break the losing streak.

Narduzzi has already attempted to spark the tensions by antagonizing Notre Dame for its independent status. At a press conference in November, Narduzzi suggested that the ACC should give Notre Dame an ultimatum — join the conference or say goodbye.

Narduzzi knows to be the best, you have to beat the best. Pitt could benefit from playing more  elite competition, but the coach might be biting off more than he can chew. Since Narduzzi has arrived at Pitt, he’s gone a very lackluster 5-15 against ranked teams. Three of those losses came against Brian Kelly’s consistently competitive Notre Dame teams.

If Panther football ever wants to compete at a national level again it has to start with beating its rivals. When programs beat their rivals, recruiting gets better, attendance gets higher and the coach’s chair gets cooler.

Pitt stands in great position to make rivalry wins a routine occurrence, with the Backyard Brawl set to reignite in 2022 and a rematch against Notre Dame already scheduled for 2023.

If the Panthers can start ripping off wins against rival teams, there’s hope the program can regain its former luster. If not, Panther football will continue to wallow in mediocrity.