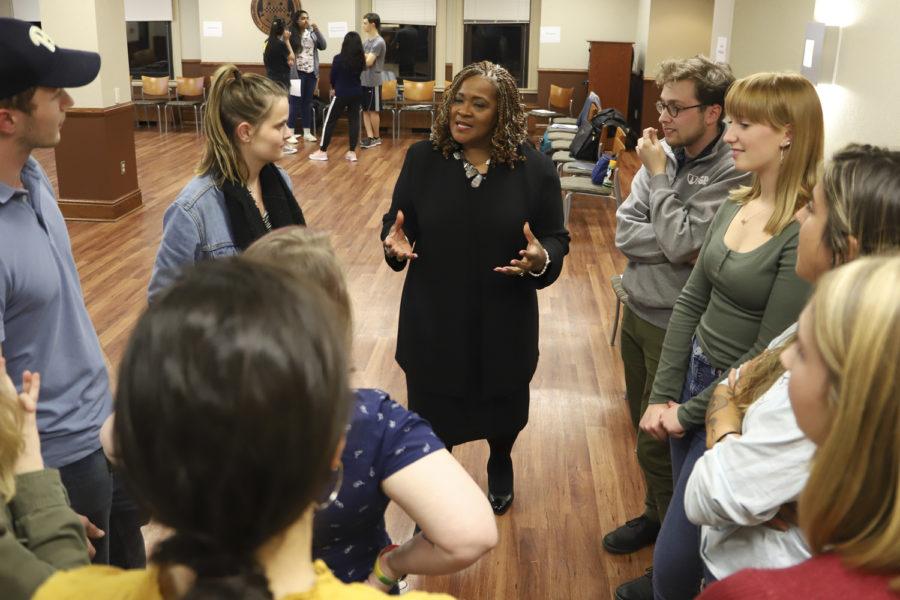 Kathy Humphrey, senior vice chancellor of engagement, at a spring 2019 event with students.

Kathy Humphrey joined Pitt in 2005 as vice provost and dean of students, the job currently held by Kenyon Bonner. She was promoted to senior vice chancellor for engagement and chief of staff to Chancellor Patrick Gallagher in 2015. Kevin Washo took over the chief of staff responsibilities in December 2017.

Dorothy Davis, the chair of Carlow’s board of trustees, said Humphrey emerged as an “extraordinary” leader after a “robust national search.” The Catholic university is located in West Oakland, just down Fifth Avenue from Pitt.

“Her dynamic vision will inspire and motivate Carlow students, faculty and the larger University community with her courageous voice, effective skills and engaged involvement,” Davis said in a press release.

Gallagher said he is “deeply grateful” for Humphrey’s service to Pitt, and is excited to see how Carlow transforms on her watch.

“Kathy is passionate about improving students’ lives through higher education — a pursuit that seems woven into her DNA,” Gallagher said. “Her ability to articulate and energize a vision — and then move it into action — is rivaled only by her commitment to supporting students and their success.”