Panthers bounce back with 1-0 shutout against Boston College 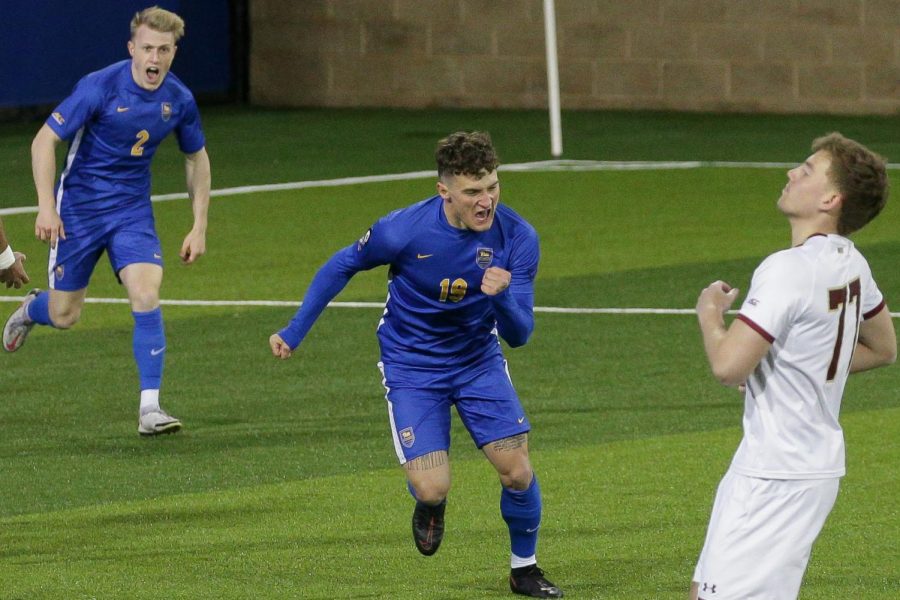 Sophomore midfielder Veljko Petkovic (19) celebrates after scoring the first and only goal of Saturday's 1-0 victory over Boston College.

Ambrose Urbanic Field saw a tale of two halves on Saturday night. The shot-heavy first half of the Pitt men’s soccer match against Boston College (0-2 ACC, 0-2 Overall) featured two high-octane offenses who forced each goalie to work, while the final 45 minutes saw much fewer scoring opportunities.

But no matter how you slice it up, Pitt (9-2, 1-1) earned a 1-0 victory over BC, picking up its first conference win since the restart of the campaign.

The Panthers entered Saturday night’s contest ranked No. 8 nationally after a 3-0 shutout loss at the hands of North Carolina in Chapel Hill last Friday, failing to show many signs of life in the process. Pitt didn’t tally a shot until the 63rd minute, but by that time, the Tar Heels already had a stranglehold on the game.

Pitt head coach Jay Vidovich acknowledged that the team experienced an adjustment period to start the second half of the season, but he has seen improvements as his team has begun to adapt.

This was put on full display Saturday night.

The match got off to a fast-paced start, as both the Eagles and Panthers saw chances early on. Pitt’s strategy involved an arsenal of lead passes out of its own zone and using the speed of its midfielders and forwards to exploit the Boston College defense.

This strategy proved very effective in the opening minutes.

An early strike from Panther sophomore forward Veljko Petkovic came off of the fast-paced rush, giving Pitt a 1-0 lead in the third minute of the game. Petkovic notched his sixth goal of the season on the strike while graduate student forward Jasper Loeffelsend picked up his seventh assist, which leads the team.

Pitt’s offensive attack continued to generate opportunities within the first 10 minutes of the game, netting a header in the seventh minute, but the ref disallowed the goal due to offsides. The leading scorer for the Panthers this season, sophomore midfielder Valentin Noel, also fired a shot off of the crossbar in the 28th minute.

After failing to tally a single shot in the first half against North Carolina, Pitt ripped off nine prior to the intermission against Boston College.

While Pitt got out to the early lead, Boston College also had its fair share of chances prior to halftime. The Eagles forced the Panthers defensive unit to fend off a barrage of scoring opportunities after their initial burst. While BC would get three shots on net and five total, it headed into the break down 1-0.

The second half featured impressive performances by both defenses, as neither Pitt nor Boston College could muster much on the attack. The defenses evolved into a more aggressive play style in the second half, as both teams picked up a pair of yellow cards.

But as the game began to tick down into the closing minutes, both teams had chances to score.

Pitt senior forward Alexander Dexter had several promising rushes up the wing, but BC junior goalkeeper Christian Garner stymied Dexter on numerous occasions. Dexter finished with three shots, tied for the team lead with first-year forward Bertin Jacquesson. While Dexter was held off the scoresheet, he heavily contributed to Pitt’s offensive success, all while playing with a broken hand.

On the other end, Konradsson continued to play the enforcer for the Eagles. He finished with five shots, the strongest of which came in the 87th minute from inside the box. The hand of a diving Campuzano met the potential game-tying goal, sealing the home victory for the Panthers.

The highlight-reel save capped off a stellar performance by Campuzano, logging his second clean sheet in three matches. The senior goalkeeper kept Boston College at bay, continuously frustrating attackers such as Konradsson and fellow Eagle midfielder sophomore Michael Suski. Both Suski and Konradsson had quality chances to cut into the Pitt lead, but Campuzano stood tall every time.

While the box score may have indicated a tough outing against UNC for Campuzano, Vidovich emphasized the fact that defending is not an individual task. While disappointed in last outing’s effort on the defensive end, Vidovich was very pleased with Saturday’s performance.

“Last week wasn’t about our goalkeeper but about our team defense,” Vidovich said. “The team worked hard to earn a clean sheet today.”

Garner put together an impressive performance, making seven saves after yielding the early goal. Despite quality chances from Dexter, Jacquesson and others, Garner kept the Eagles within arms reach for all 90 minutes.

“Their goalkeeper came up big several times,” Vidovich said of Garner. “Their defenders did a nice job of blocking shots as well as crosses, so hats off to Boston College.”

While Garner and the Eagles defense kept Pitt from running away with this one, the Panthers got the job done and picked up a pivotal victory under the lights. Pitt needed to flip the script after a disappointing performance on both ends of the ball against UNC, and did just that.

Vidovich saw the win as a product of a complete team effort. While he didn’t name a standout player, the collective effort of his team impressed Vidovich.

“Everyone did their job,” he said after the game.

Looking ahead, the Panthers look to build off of their momentum as they head to Durham, North Carolina, on March 19 to take on Duke.