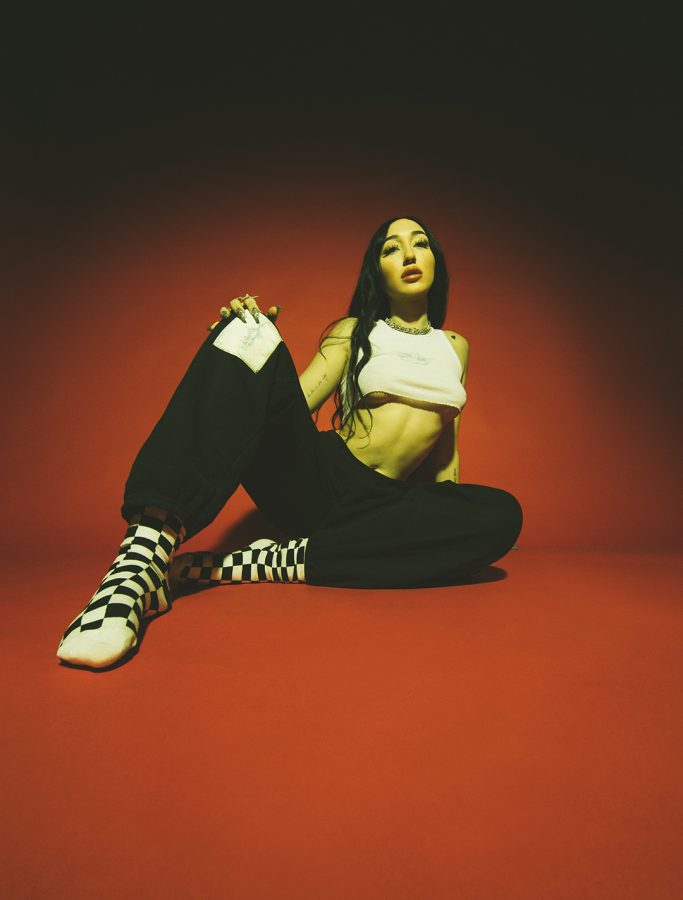 Noah Cyrus joined Pitt Program Council Friday night for a virtual concert and Q&A. The Grammy-nominated musician performed several original singles and songs from her latest EP, “The End of Everything,” and answered students’ questions about quarantine and the Grammys.

Noah Cyrus knows what it’s like to feel lonely. Her struggle with anxiety and depression inspired her 2019 song called — well, “Lonely.”

Cyrus joined Pitt Program Council Friday night for a virtual concert and Q&A. The Grammy-nominated musician performed several original singles and songs from her latest EP, “The End of Everything,” and answered students’ questions about quarantine and the Grammys. Reagan King, PPC’s special events director and a senior communications and rhetoric major, moderated the Q&A.

Adorned in a hunter’s camo crop top and matching pants, Cyrus sang in front of a live band. The 21-year-old singer-songwriter’s work combines pop with some country elements, and her lyrics are both deeply personal and indicative of problems that many young people face.

Cyrus performed “Lonely” during the show, opening with the lyrics “I’m slowly killing myself / I’m trying so hard at the back of the shelf” and launching into a heartfelt ballad that serves at times as a literal cry for help. After the song, Cyrus reflected on the loneliness of the COVID-19 pandemic.

“I wanted to bring that one back. I feel like everyone feels that way, a lot. Just need to get that emotion out,” Cyrus said.

Cyrus also performed her 2021 single “Dear August,” saying it was her first time playing it outside of rehearsals. She recorded the song with Australian singer-songwriter PJ Harding, who also co-wrote four songs on “The End of Everything,” and Cyrus lamented the fact that he couldn’t be present to sing it with her. The lyrics speak to the feeling of being lost and a desire to find hope in a seemingly hopeless situation.

“I spend every evening praying for the dawn,” Cyrus sang. “Save me, looking for someone to save me / Give me everything you gave me but your scorn.”

Other songs from Friday night’s lineup included “Almost Famous,” which Cyrus wrote when she was 16, “I Got So High That I Saw Jesus” and “On Mine,” a collaboration with Diplo. She closed the night with “July,” her most popular song on Spotify with more than 390 million streams.

During the Q&A, Matthew Avery, a junior interdisciplinary arts major at Pitt Bradford, asked Cyrus how she’s spending her time during the COVID-19 pandemic. She said she has written “a ton” of new music and spends most of her time with her dogs.

“If I open my garage door that’s like, in my kitchen to my garage, my dog runs into the garage so that he has to go in the car. So we’ve been doing walks during the day and car rides at night,” Cyrus said.

Avery, a fan of Cyrus since her 2017 collaboration with Marshmello on the song “Chasing Colors,” said he enjoyed the performance, and was “honored” to have Cyrus answer his question.

“All week I have been listening to her music while I was doing my daily workouts. I was beyond happy with the songs she chose to perform at tonight’s performance,” Avery said. “I had stars in my eyes with every song that she performed, and she performed all her songs to pure perfection.”

Cyrus also spoke about her songwriting process, saying writing allows her to express herself and her emotions in a straightforward, genuine way.

“My favorite part of the songwriting process is being able to explain exactly how I’m feeling, without needing to, like, say it to everyone over and over and over again,” she said. “You kind of get to hear my song and it just explains where I’m at, and that just sums everything up.”

King asked Cyrus how she felt about her nomination for Best New Artist at the Grammys, and Cyrus said although she was nervous, she wanted to focus on living in the moment with her fellow nominees.

“I’m excited and nervous and I’m amazed that I’m in a category full of such incredible artists, who I got to meet all of them last night,” Cyrus said. ”We just got to celebrate this moment for us in music, and really how special it is. Just reminding each other, ‘This is our moment.’”

Danielle Moss, PPC’s public relations director, said she hoped Cyrus’ nomination would increase student interest in the concert. She also said PPC wanted to bring Cyrus to Pitt because of her reputation for putting on a quality virtual performance.

“It is nice to be at the point of the virtual environment where we can look at other examples and see who has been doing a good job of entertaining crowds even virtually, and gravitate towards them,” Moss said.

Cyrus ended the night with her advice to other young people looking to enter the music industry. She urged the audience to stay true to their individual selves, although she recognized that it’s a difficult thing to do.

“You are the only you, like there is literally one of you on this earth with that beating heart,” Cyrus said. “It’s so valuable. You’re so valuable, and know your value, know your worth, no matter what you’re being told by others. And it’s much easier said than done.”