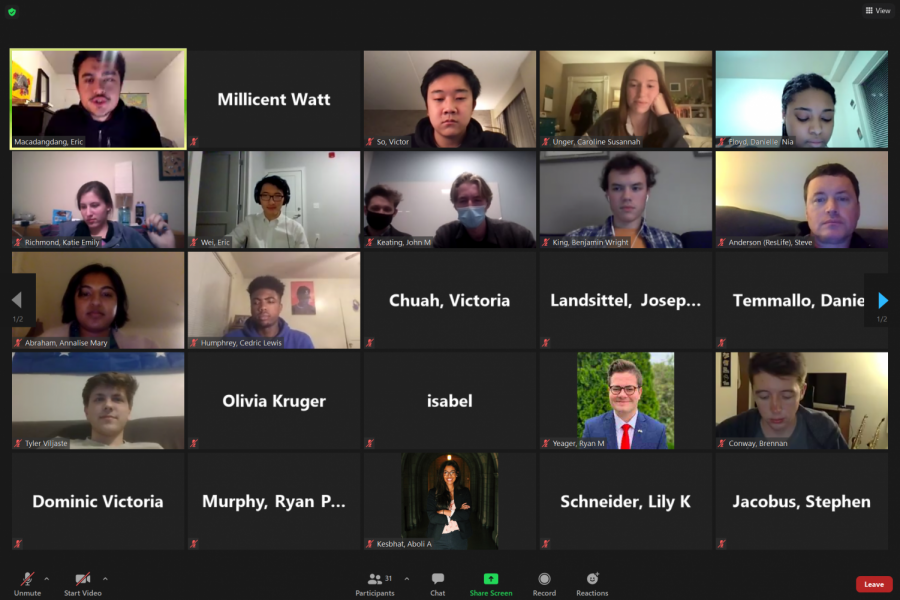 In his opening remarks at Tuesday’s meeting, Student Government Board President Eric Macadangdang said students should assume they have been exposed to COVID-19 if they attended large St. Patrick’s Day gatherings, per guidance from Pitt’s COVID-19 Medical Response Office.

“The CMRO has announced this morning that if you were at one of these large gatherings over the weekend, you should assume that you have been exposed to COVID-19 and begin quarantining immediately,” Macadangdang said.

Macadangdang said getting through the pandemic “requires mutual understanding and effort in complying with health and safety guidelines.”

He also said SGB’s Elections Procedures Review task force has created a “public comment form” for Pitt students to voice any concerns about this year’s election. The form’s findings will then be shared with both SGB and the public in “the next few weeks,” according to Macadangdang.

The purpose of the task force is to review the events of this year’s unusually contentious election and the board’s elections code, as well as listen to and implement Pitt student feedback and concerns. According to its charter, the task force plans on reaching out to stakeholders — including Student Affairs and “other University offices” — as well as the board’s elections and judicial committee chairs, and the candidates in this year’s elections.

Macadangdang said Pitt students should use the survey to give honest feedback not just on election processes, but also SGB as an organization.

“Please take advantage of this form to give honest feedback on how we can improve not only on elections-related procedures but how we can better communicate with students as a whole, regarding SGB-related matters,” Macadangdang said.

SGB created its second task force in as many weeks by adopting the charter of the Students of Color and Solidarity task force, spearheaded by Bea Fadrigon, the chair of SGB’s diversity and inclusion committee, and Danielle Floyd, a board member-elect and chair of the board’s wellness committee. According to Fadrigon, the task force aims to “hold a safe space for vulnerable, introspective and meaningful conversations about our specifically underserved and underrepresented groups at Pitt.”

The task force also plans on developing “a more unified voice” for students of color in order to approach the University for support and acknowledgement of certain issues, according to Fadrigon. She also said the “ultimate goal” of the task force is to unify students of color at Pitt, which is a predominantly white institution.

“The ultimate goal of this task force is to build solidarity among students of color within the University, a primarily white institution and promote a sustainable, collaborative community,” Fadrigon said.

In the midst of midterms, Tyler Viljaste, vice president and chief of cabinet, provided an update on grading options for this semester. He pushed for students to have a satisfactory/no credit grading option this semester, similar to last spring. Viljaste said he was “disappointed” that Pitt administration — including Provost Ann Cudd and Joe McCarthy, vice provost of undergraduate studies — instead opted for a late withdrawal and revised “G” grade.

According to Viljaste, Pitt students will have a “late withdrawal” option, similar to the fall semester — which upset many Pitt students — where students could opt to withdraw from a class after the semester ended. The provost’s office is also modifying the “G” grade this semester, which is used for “extenuating circumstances” when students need more time to complete coursework after the end of the semester.

Viljaste said this new option will allow students who have been affected by the pandemic or other stressors to take the time they need to work on coursework.

“With all ‘G’ grades, this is something you would have to work out the details with your instructor,” Viljaste said. “But know that if it comes towards the end of the semester and you feel as though you need more time to complete some projects as a result of the pandemic or other stressors, this ‘G’ grade is a new option.”

In his closing remarks, Macadangdang said the national search for the next dean of students will begin this summer, now that current officeholder, Kenyon Bonner, will transition into the role of vice provost of student affairs. Macadangdang encouraged Pitt students to fill out a survey to let the administration know what they should look for in the next dean, as it affects not only student life and Student Affairs, but also the “overall student experience.”

Macadangdang also urged Pitt students to reach out to SGB in ways such as attending Tuesday public meetings, going to SGB office hours, joining a committee or submitting a “FixItPitt!” response. He said SGB relies on student feedback to continue running effectively.

“We’re a group of your peers who want to see Pitt improve and work better for us, but the quality of our work largely relies on the good, constructive feedback from our students,” Macadangdang said.

The allocations committee received seven requests for $37,730.52, and approved $37,675.63. Four requests required approval from the board.

Pitt Triathlon requested $5,822 for an upcoming competition to use toward registration and lodging. The board approved in full.

Global Medical Brigades requested $18,329 for two autorefractors to help provide glasses to people in Pittsburgh and Honduras. The board approved in full.

Pitt’s Rainbow Alliance requested $10,000 to invite Adam Rippon to speak with club members and share his experience in being part of the LGBTQ+ community. The board approved in full.
Pittsburgh club baseball requested a general expense of $1,904.52 to pay for new bats and masks for the team. The committee recommendation was to approve with revisions, and the board approved $1,849.63.