Women’s basketball hopes to build around youth in offseason 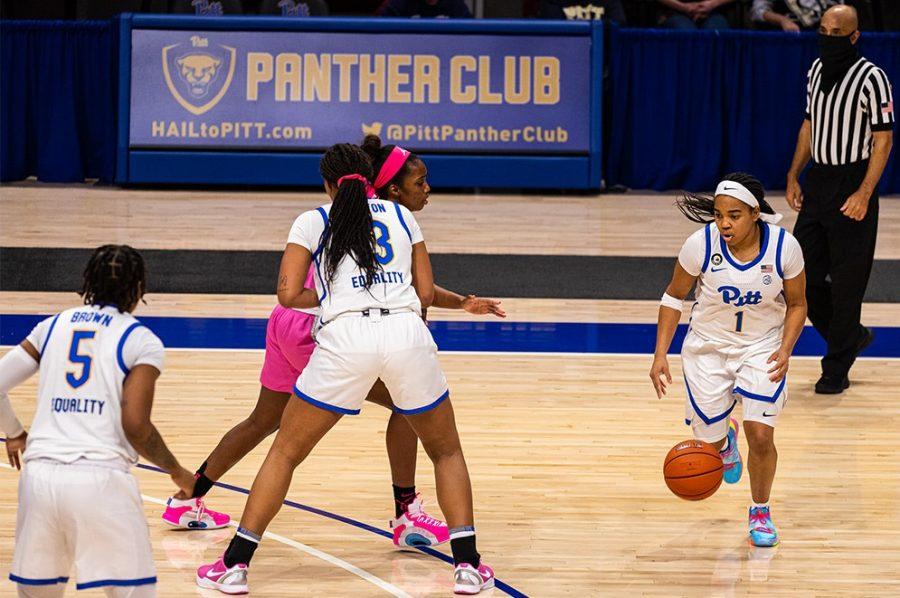 This season was a tale of two schedules for Pitt women’s basketball. The young roster had to contend with COVID-19 and its own inexperience, all of which yielded a 5-14 record, and a 3-12 conference record.

The first third of the season started off decently, with non-conference wins over George Mason and Hofstra. And after losses to Delaware and Virginia Tech, the Panthers picked up a statement win over then-undefeated Clemson on Dec. 13. Sophomore guard Dayshanette Harris scored 21 points and dished out five assists to help the Panthers stave off a Tigers comeback attempt, and they won 80-71.

That proved to be the high point for Pitt’s season, as it all went downhill very quickly.

The Panthers looked to wash out the stench of a 14-point defeat at Florida State on Dec. 20 — where neither team scored more than 20 points in a quarter — with a home matchup against Boston College on New Year’s Eve. But five minutes before the game was set to tip off, a positive COVID-19 test within the Panthers program postponed the game. Pitt postponed its next four games against North Carolina, Louisville, Clemson and Notre Dame, in accordance with the ACC’s testing protocols.

COVID-19 presented issues for the entire ACC throughout the season. Several teams were forced to reschedule or cancel games, and Duke and Virginia cancelled their seasons midway through. Pitt ended up missing more than a month of activity before its next game on Jan. 21 against the Miami Hurricanes at the Pete.

The Panthers started that game like they had never left, outscoring Miami by a staggering 31-10 margin. But the ’Canes completely flipped the script in the second quarter, outscoring Pitt 26-6. The home team played most of the game on its back foot, and Pitt’s surprising comeback in the fourth quarter came up just short when it missed several shots in the waning seconds. Miami won the game 72-68.

Pitt would not win a single home game after the aforementioned “statement win” against Clemson. This stretch included a drubbing at the hands of No. 3 Louisville, a sluggish game against Notre Dame and close losses to North Carolina and Syracuse.

The only wins the Panthers collected after their COVID-19-induced layoff were both on the road — Jan. 26 against Clemson, and Feb. 16 against Boston College.

In those games, the three biggest issues for the Panthers were free throw shooting, fouls and turnovers. For the season, they shot 64.8% from the line, committed just more than 20 fouls a night, and turned the ball over 18 times per game. Harris knew that some of this was the result of frustration within the team, but she said everyone within the program tried to support one another through the trials this season presented.

“We just lean on one another, and pick each other up,” Harris said after the loss to UNC. “Once we see someone’s frustrated, the whole team goes over and picks them up.”

Despite lackluster performances on their home court, the Panthers’ worst loss came on the road against Wake Forest.

Pitt played a solid defensive game, holding the Demon Deacons to just 32.8% shooting. Sophomore forward Rita Igbokwe grabbed a game-high 12 boards to go with seven points, and the Panthers minimized their mistakes on defense. They had a five-point lead with a minute and change left, but the Deacons clawed their way back and forced overtime.

But Pitt only made one of its five shots in the extra frame, and Wake Forest won 64-61.

Pitt improved on last year’s record of 5-26 (1-17 ACC). But by the time the ACC Tournament came around, the Panthers had lost both Harris and senior guard Gabbie Green to injury. They earned the 12th seed in the conference tournament, and a date with the 13th-seeded Eagles of Boston College.

The Panthers had two games postponed against BC during the regular season, but won 83-80 in their only meeting. But in the ACC Tournament game, the Eagles had a secret weapon. Junior guard Cameron Swartz, who only scored 10 points in their last matchup, scored 33 points and went 15-16 from the line in the 67-56 tournament win. Pitt junior guard Jayla Everett dropped 22 points, but that would prove futile, and Pitt left the tournament empty-handed.

Head coach Lance White entered his third season with back-to-back losing campaigns under his belt. He has only cracked 10 wins once, in the 2018 season, and has never had more than three conference wins in a season. This has caused some concern when compared to other Pitt basketball coaches, but White has a young roster at his disposal, unlike those before him.

Forwards like Igbokwe and first-years Cynthia Ezeja and Tracey Hueston are expected to step up for departing seniors Cara Judkins and Marcella Lamark. The Panthers also have a plethora of young guards ready to replace Green and eventually Harris when she leaves.

Off the court, Everett was named an All-ACC honorable mention. Harris received a spot on the All-ACC Academic Team as well. Both players are slated to return next year.

There will hopefully be a full season in 2021-22, where the Panthers can play a full 30 games instead of the 19 played during this pandemic-altered season. If they want to drastically increase their win totals, they will have to make their free throws, hold onto the ball and keep their hands off the opponents. The Panthers have the personnel, now they need to put the pieces together.