Column | Was this worth it: Reflections from a season covering COVID basketball 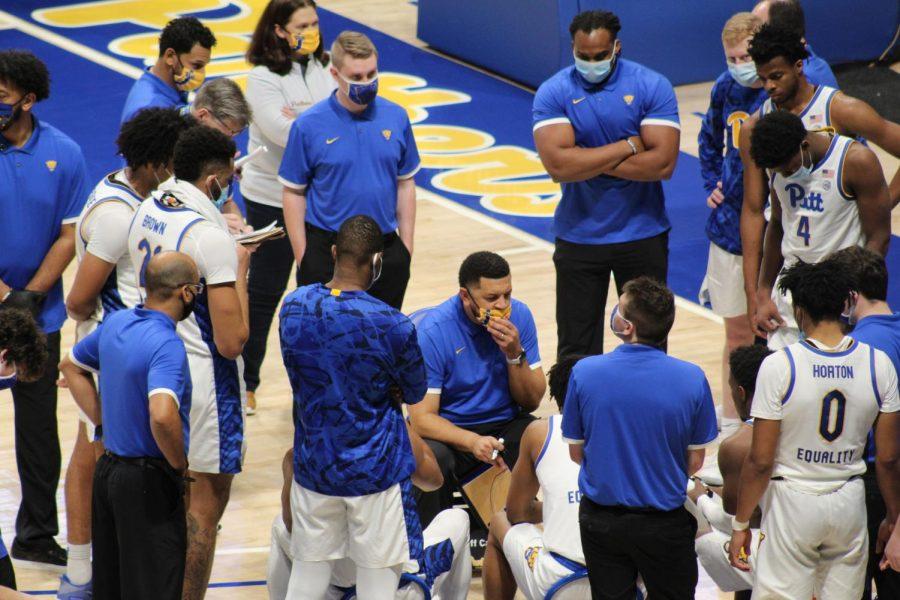 The Pitt men’s basketball team wore masks in a team huddle during its game against Saint Francis University on Nov. 25. Head coach Jeff Capel was gut-wrenchingly honest over the course of the past few months about how difficult this season was due to the COVID-19 pandemic.

I wasn’t able to attend a Pitt men’s basketball game in person until Jan. 16, when the Panthers and Syracuse clashed at the Petersen Events Center. After covering the team remotely for two and a half months, I witnessed — live and in person — Pitt win in dominant fashion, picked up a hard copy of game notes and reconnected with colleagues that I hadn’t seen in almost a year.

Those moments have become luxuries that are no longer taken for granted.

The fact that I was able to continue covering the team through a pandemic has been a blessing too great to describe. But this season was missing something, and I wasn’t able to pinpoint just what that something was until I had filed my last game story.

As the season wore on and I experienced, firsthand, more of the pandemic-induced procedures that made putting on a college basketball season possible, I couldn’t help but feel as if the sport had lost some of its purpose.

At every Pitt home game, I sat in a mostly empty arena, far removed from the main action. Media members had to be masked, remain socially distant and couldn’t wander down closer to the floor in order to get a closer glimpse of who they were there to write about. Everyone was under the same roof, but interviews were still conducted over Zoom, subjects separated from reporters by a screen.

College basketball isn’t a great sport because there is something inherently “good” about a group of 18-to-22-year-olds putting a ball in a metal ring. College basketball is thrilling because of its pageantry and is deeply personal — especially for a student journalist — because you can write about a player dominating national television one night and go to class with them the next morning.

It’s a chaotic and confounding sport, but in that same vein it is deeply human. The small rosters allow you to notice finer details, and the fact that the stars are students makes the game feel much more accessible than its professional counterparts.

But putting screens and masks in between audience and spectator made realizing and experiencing these abstract benefits difficult.

Windows to talk with players and coaches are short, technology created constant hindrances and the fact that communication existed almost exclusively through the internet removed the personal connection that is created when reporters are in the same room together with the people they cover.

It didn’t feel fun or rewarding. When you strip away a sport to its bare bones, you’re left with a robotic collection of X’s and O’s, wins and losses, quantifiable components that ignore the personalities behind them. More often than not, I found myself questioning what the point of these games was.

Over the course of the season, Pitt head coach Jeff Capel was gut-wrenchingly honest about how difficult this season was. In media availabilities throughout the past five months, Capel repeatedly called attention to pandemic basketball’s innate cruelty, from his own bout with COVID-19 to the struggles of his players.

But the question remained — if the players and coaches were suffering, who did we put this on for? Who benefited from a season defined more by its shortcomings than its successes? Looking back on the totality of the season, what did we gain from a regular season during which unpaid athletes risked long-term detriment to their mental and physical health and took the floor for our own entertainment?

The truth is that it was largely selfish, and it all leads back to March.

Bookending the pandemic experience is the annual Division I men’s college basketball tournament, the spectacle known as March Madness. Its cancellation last year was one of the harbingers of fundamental changes society was about to experience, and its return is a welcome reminder that we are close to reaching the other side of a nightmare year.

The tens of millions who spectate and commentate on the sport wanted to return some sense of familiarity to an otherwise unfamiliar experience. But that desire quickly turned to desperation. We put on the games at the expense of what makes them so valuable — the sense of community that comes with being one of many enjoying a common experience.

But while the regular season was, for the most part, a slog during which postponements, cancellations and COVID-caused absences were commonplace, the drama of conference tournament week offered some respite.

This was most clear at the conclusion of the ACC Tournament this past Sunday, when unlikely champion Georgia Tech’s excellent senior lead guard Jose Alvarado gave a stirring post-game interview during which he laid out what made the win mean so much.

“This is like a dream come true, and I’m proud of my guys,” Alvarado said. “I love this win. This is gonna last me a lifetime. I got my daughter in the stands, I got my dad … I’m just so happy I get the chance to tell them I’m a champion, and I’ll bring a trophy home.”

I hope that the coming national tournament gives us more of the same euphoria along with every other emotion that high-stakes sports evoke. The agony of defeat and thrill of victory are two sides of humanity that made past iterations great.

I look forward to watching and experiencing March Madness and hope that by the end, we can confidently say that playing basketball during a pandemic was worth it.