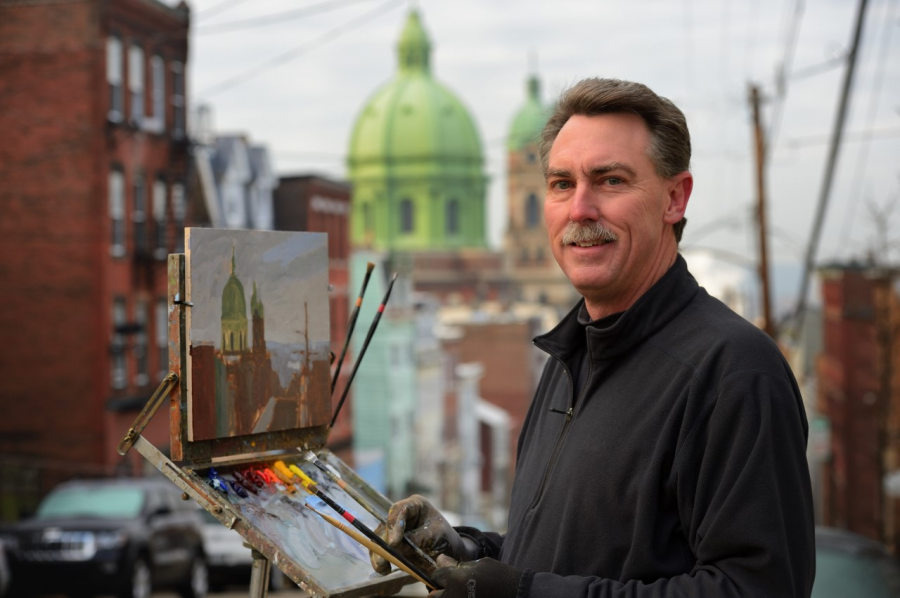 Ron Donoughe’s new book, “Brownsville to Braddock,” is a collection of landscape paintings of the Monongahela Valley.

As a professional painter, Ron Donoughe sees the world through shades of light and shadow, travelling throughout western Pennsylvania and capturing the view of the landscape through quick brushstrokes on canvas.

Donoughe painted different landscapes across the Monongahela Valley for more than a year, from industrial plants to wide hills and landscapes, and compiled them into a book documenting the current state of the area. The University of Pittsburgh Press recently published the book, called “Brownsville to Braddock,” in March. It captures the sights of the Monongahela Valley and explores views from neighboring towns such as Brownsville, Donora, Clairton, Duquesne, Braddock and California.

The Monongahela Valley — or the “Mon Valley,” for short — has had a varied history over the years. It was once an area that thrived economically due to the presence of large industrial plants and steel mills, but has now settled into difficult times with the decline of manufacturing jobs and the closing of factories.

“Brownsville to Braddock” is not the first landscape painting project Donoughe has worked on, having previously published “90 Pittsburgh Neighborhoods” and the “Essence of Pittsburgh.” The Mon Valley drew his attention in particular due to its varied history.

“I’ve done these yearlong projects where it gives me a chance to dig deeper into a particular area. With this particular project, I’ve always been curious about the Mon Valley,” Donoughe said. “[This project] was a way to learn about the history of the Mon Valley and how it affected the growth of Pittsburgh.”

Donoughe travelled to many different sites within the Mon Valley over the past year to paint landscapes within the region. Donoughe utilizes a style of art called plein air painting, which focuses on painting outdoors and capturing the scenery as is. He paints directly on site — bringing a canvas and set of colors and brushes near the area he intends to capture — and loses himself in the painting for a while.

“Each painting takes around three hours. Because, after that, the light has entirely changed and it’s a different shadow, and you might as well start over,” Donoughe said. “I don’t like to work with [the paintings] too much when I bring them back because I feel like it possibly can lose the spirit of the piece.”

Donoughe said he considers painting an important visual tool when documenting an area, as well as a valuable way to capture the feelings behind a particular place and convey it to the viewer. Despite many favoring the convenience of photographs during the modern era of cellphones and other instant technology, Donoughe said he believes landscape painting can offer a different visual experience to the viewer when compared to looking at a photograph.

“I think our eyes are sensitive and we don’t realize that until we start comparing a photograph with actually being on site,” Donoughe said. “There is that spirit of place that enters into me as an artist and gets into the painting and shows light and shadow in a very clear, genuine way. You are using all of your senses.”

Donoughe’s paintings capture a unique aspect of the history of the landscape of western Pennsylvania, according to Frank Kurtik, a current employee of Pitt’s Heinz Chapel who previously worked in the University’s Archives and Special Collections as a photo curator. He said while there were a few painters who captured the industrialization of the area during the rise of the steel industry, there was never a focus on painting landscapes within the area.

“There was a group of painters, a very informal ‘school’ known as the Scalp Level painters, and they would go out to the area east of Pittsburgh and Cambria County or Johnstown and then sometimes paint the nature and the City itself in desperate environments,” Kurtik said. “But there was never that concentrated focus on painting nature as it existed.”

The Scalp Level painters, like Donoughe himself, utilized the plein air painting style when capturing landscapes and urban areas around Pittsburgh.

“Ron’s work fitting into these painters came later,” Kurtik said. “He painted what was around the City and in the environment in general. And he continues that tradition of going out and doing his work, outdoors and finishing up a few sketches back in the studio.”

Donoughe said he hopes his art and his work on projects such as “Brownsville to Braddock” not only show western Pennsylvania in its raw beauty, but also serve as a collection of history that captures the current state of the area.

“The way that we work and live are changing before us so quickly,” said Donoughe. “Part of my mission is to document [the area] as a time capsule. And these books are one way of keeping that together visually for future generations.”