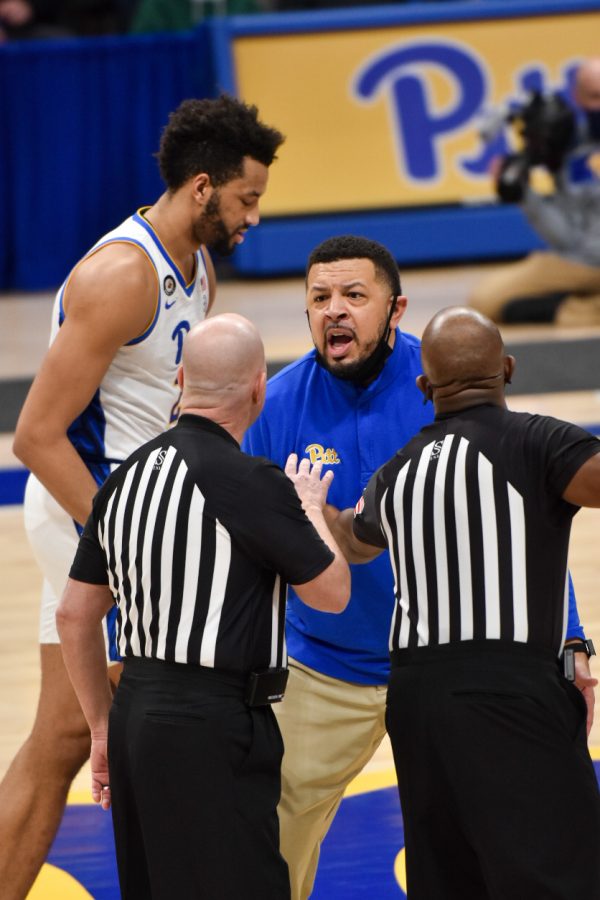 Pitt men’s basketball head coach Jeff Capel has a heated exchange with the referees during the Panthers’ game against NC State on Feb. 17.

Since his hiring in March 2018, head coach Jeff Capel has seemingly been given an impenetrable shield of job security until no evidence of the Kevin Stallings era remained — and rightfully so. Pitt’s 4-32 mark in ACC play under Stallings warranted a complete rehabilitation of the program, and Capel deserved time to instill his culture before any questions about his job arose.

But at what point does Capel’s infallibility wear off? After a tumultuous 2020-21 season, the answer is now.

Year three of the Capel administration has just come to an end, and we must ask how much change has truly occurred within the program since the former Duke assistant coach’s arrival. Sure, the Panthers have annually improved upon their abysmal 0-18 conference record in Stallings’ final season, but Capel has still never led the Panthers to a winning record.

This year seemed different. Despite all of the scheduling and personnel-related challenges presented by the COVD-19 pandemic, Capel’s Panthers got off to an excellent start to their season. Despite a stunning loss in their opening game of the campaign to St. Francis (Pa.), Pitt surged to an 8-2 start out of the gates, including an impressive 4-1 record in ACC play.

But the wheels fell off after a close loss to Wake Forest. While the loss initially appeared as a minor setback after an impressive run, no one could have predicted the collapse that ensued. The Panthers lost 10 of their final 12 games, and once again finished under .500. This implosion seemed even more shocking when considering the play of star sophomore forward Justin Champagnie, widely regarded as one of the best players in the nation and named a second team All-American by ESPN.

The season came to a disheartening end at the ACC Tournament with a loss to Miami, a team Pitt defeated to open up conference play back in early February. The loss loomed symbolic of how far the team had fallen in just over a month.

To add salt to the wound, two of the key members of this year’s squad, junior guards Xavier Johnson and Au’Diese Toney, recently elected to enter the transfer portal and forego the final games of the 2020-21 season. The team also watched sophomore guard Gerald Drumgoole pack his bags after the ACC Tournament loss.

While the departures cannot be fully attributed to Capel, it is a sign that the program has become relatively stagnant under the coach. Retaining players is a central part to sustained success in college basketball, and the amount of on-the-court turnover in the Pitt program has been alarming.

In prior years, the case could be made that Capel hadn’t fully put his signature on the program, but that argument doesn’t hold weight when discussing this season. Capel’s recruits made up the entirety of the roster with the exception of lone senior Terrell Brown, but the team couldn’t regain traction after the hot start, even in a parity-filled ACC. Additionally, Champagnie may head to the NBA draft and no signs suggest Pitt will improve upon yet another underwhelming campaign entering the 2021-22 slate.

The talent existed this season, but the Panthers missed out on the NCAA Tournament for a fifth consecutive season — and they didn’t come all that close. The grace period is over, and Capel’s next moves will be the most important in his tenure at Pitt.

The recovery starts with building next year’s team from the ground up. The 2021-22 roster remains largely unknown, as at least five scholarship spots will still be up for grabs heading into the offseason after the transfers of Toney, Johnson and Drumgoole. Add this to the reality that Pitt has a grand total of zero incoming first-years, and it becomes apparent that Capel has quite a tall task ahead of him.

The precarious situation of Pitt basketball mirrors that of Oklahoma in Capel’s final days as the program’s bench boss. Capel reached the Elite Eight with the Sooners in 2009, but a wave of players left two years later as Capel seemed to fall out of favor with the school’s higher-ups. Unfortunately, Capel does not have the prior success to bank on in his present-day situation with the Panthers.

In order to avoid history repeating itself, Capel needs to restore his past recruiting prowess that he used to bring in Champagnie, Johnson and other key members of this year’s squad.

One recruit that Capel will undoubtedly pursue is Tre Mitchell, a sophomore power forward/center who recently announced his pending transfer from UMass. A Pittsburgh native, Mitchell would immediately fill a need that Pitt couldn’t address throughout the season. The Panthers originally recruited Mitchell out of high school, but didn’t reel in the talented big man after he received more than 30 other D1 offers.

Transfers such as Mitchell will be key to the team’s success next year, and while no shortage of talent awaits in the transfer portal, the optics of recent drama within the Pitt program may potentially hinder the Panthers’ chances at some of the blue-chip players.

The same is true when it comes to future recruits. Pitt has had its eyes on recent Creighton decommit TyTy Washington and 2022 recruit Jalen Hood-Schifino, a top-shelf prospect who recently decommitted from Pitt but still sees Oakland as a possible destination.

Reeling in any of these players would go a long way when it comes to Capel’s long-term job security. But if Capel can’t revive a sputtering program in short order, Pitt may get on the search for a new head coach sooner than expected.