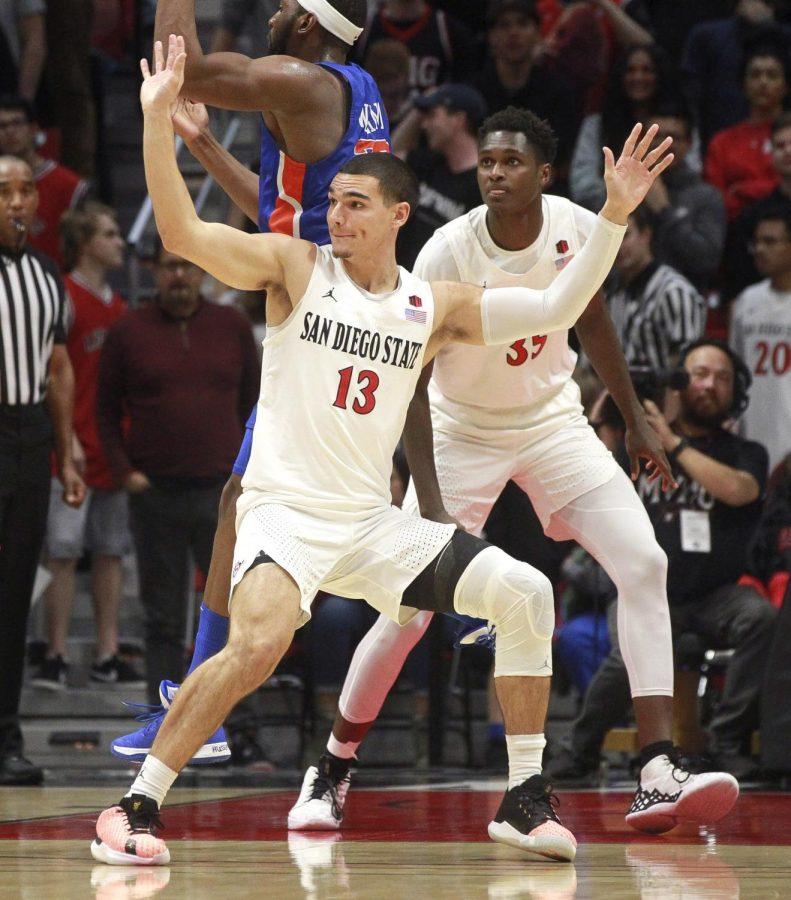 San Diego State's Caleb Giordano (13) on the court against Boise State at the Viejas Arena in San Diego on Jan. 11, 2020.

The NCAA Tournament Selection Show aired this past Sunday for the first time in two years. March Madness has returned, which means it is time for college basketball fans to take another shot at the first perfect bracket.

Completing an NCAA Tournament bracket is essentially attempting to predict the unpredictable. The “Cinderella” stories that seem to occur just about every year often wind up as the most beautiful aspect of the Big Dance. While many people focus on what programs with a double-digit seed will manage to win a game or two, they often neglect the likelihood that any lower-seeded team can beat out the titans of its region and reach the Final Four.

The Final Four has featured at least one team with a seed of five or lower in the past 10 NCAA Tournaments. While one of these under-the-radar teams will likely make a deep run, it’s difficult to pick which one will do it.

Fortunately, I’ve got you covered. Here are the most dangerous dark horse candidates from each region of the bracket.

The seventh-seeded Ducks come in as one of just five teams from the Pac-12 conference to make the trek to Indianapolis for the NCAA Tournament this season. While the team faltered in the semifinals of its conference tournament, Oregon has as much talent as just about anyone in the country.

While they rarely had all of their best players fully healthy, the Ducks provide a matchup nightmare at full strength. Senior guard Chris Duarte and junior guard Will Richardson lead the Ducks, bringing invaluable experience and lethal shot-creating ability to the floor as one of the best backcourts in the country.

Perhaps the scariest part about Oregon would be length, with all five of its leading scorers standing above 6-foot-5. The versatility and athleticism of players like Duarte and senior forwards Eugene Omoruyi and LJ Figueroa affords head coach Dana Altman many lineup options. Five-star recruit N’Faly Dante mans the center position, possessing a size advantage on most big men in the tournament.

Besides the matchup problems they present, the Ducks also boast an extremely well-rounded and experienced roster. They have five players who average double figures in scoring, and if one player has an off night, the rest of the team steps up. Altman is no stranger to the Final Four, and the Ducks certainly look far better than their seed reflects.

Top seeds in its region, such as No. 2 Iowa and No. 3 Kansas, will certainly lose sleep at night pondering a potential matchup with Oregon. While a potential Elite Eight matchup with No. 1 overall seed Gonzaga would be an extremely tall task, the Ducks have a chance against any opponent in the field when playing their best basketball.

While the Red Raiders managed some big wins over teams such as Texas and LSU, they never truly hit full stride throughout the season. The team owns a pair of five-point losses to Oklahoma State, as well as a crushing one-point loss to West Virginia, and these games proved the difference between a No. 6 seed and something much higher.

But Texas Tech hasn’t proven incompetent during close games, and its record may deceive the blind eye. Junior Mac McClung, who averages 15.7 points per game, leads the Red Raiders as one of the most dynamic lead guards in the nation. They also boast tremendous length across the rest of their roster, headlined by star sophomore forwards Terrence Shannon Jr. and Kevin McCullar. Due to its size and versatility, Texas Tech has emerged as one of the best defensive teams in the country.

This identity shouldn’t surprise anyone familiar with the style of head coach Chris Beard, who led his team to the national championship in 2019 with this same defensive identity. Beard has the advantage over any coach that Texas Tech could face until at least the Elite Eight, making the team an attractive pick for a deep run.

The Red Raiders are built to slow teams down and take them out of their offensive sets. This poses an especially large threat to potential second-round matchup in No. 3 Arkansas, who loves to push the tempo. With Beard at the helm and McClung handling the ball in crunch time, no team wants to play Texas Tech this month.

While it may feel like a very distant memory, just seven years ago Shabazz Napier led the Connecticut Huskies to a national championship as the No. 7 seed in the East region. In 2021, they find themselves in the exact same spot, with a very similar makeup.

Show-stopping sophomore guard James Bouknight leads UConn, and he could join the list of the program’s legendary guards with a deep run in this year’s tournament. The Huskies also have the Big East Defensive Player of the Year in senior forward Isaiah Whaley, who denies 2.6 shots per game. Head coach Dan Hurley earned national prominence from his consistently excellent performances in the tournament with his former school, Rhode Island, and he will now look to make a run with a far more talented roster.

The Huskies have the exact quality that made them so unbelievably dangerous on their 2011 and 2014 national championship runs –– a lead guard who becomes the best player on the court in almost every game. Bouknight averaged 19 points and 5.7 rebounds per game this season, and Connecticut lost just three games with him in the lineup.

However, while having a player like Bouknight makes for an advantage, Connecticut would not be on this list if it did not have an all-around great roster. Bouknight is accompanied in the backcourt by high-quality guards in juniors R.J. Cole and Tyrese Martin, who both average double figures in scoring and contribute heavily on the defensive end.

UConn received a challenging draw, facing No. 10 seed Maryland out of the Big Ten, and will then likely meet up with No. 2 Alabama and No. 3 Texas on its path to the regional final. But, if this team gets hot, don’t be surprised if it manages to get through every team in its path to a Final Four appearance, with Bouknight as the leader of another magical tournament run.

Perhaps no school faced greater disappointment from the cancellation of the 2020 NCAA Tournament than the San Diego State Aztecs. Headed into March Madness, the Aztecs boasted a 30-2 record and were eager to make a run after their greatest regular season in school history.

The team never got that opportunity, and most of the leaders of that roster have departed. However, the Aztecs remain one of the toughest and most experienced teams in the country this season, and have won an astounding 14 games in a row. Their identity is embodied in their leader, senior forward Matt Mitchell, who averages 15.4 points and 5.5 rebounds per contest. Senior guard Jordan Schakel also looks primed to become an NCAA Tournament star with his ability to shoot the basketball, knocking down threes at a 46.7% mark this season.

But San Diego State’s identity reaches far beyond its individual players. One of the best head coaches in the country, Brian Dutcher, leads the squad and specializes in team defense. The Aztecs rank sixth in the nation in field goal percentage allowed and eighth in points allowed per game, effectively preventing dribble penetration and paint touches.

The Aztecs face a tall task in their first round matchup against a perennially dangerous Syracuse team, but Dutcher’s squad matches up well. The Aztecs shoot the 3-point shot with very solid efficiency at 37.5%, ranking 37th nationally, and can open up inside opportunities against Syracuse’s signature zone with the ability to make outside shots. Defensively, they will limit shots behind the arc, which Syracuse relies upon heavily.

If San Diego State gets past the first round and extends its winning streak to 15, it will pose a dangerous matchup to any team in its region. The Aztecs have about as much momentum as possible at the right time of the year, and their experience and defensive prowess make them a serious contender for a great run.