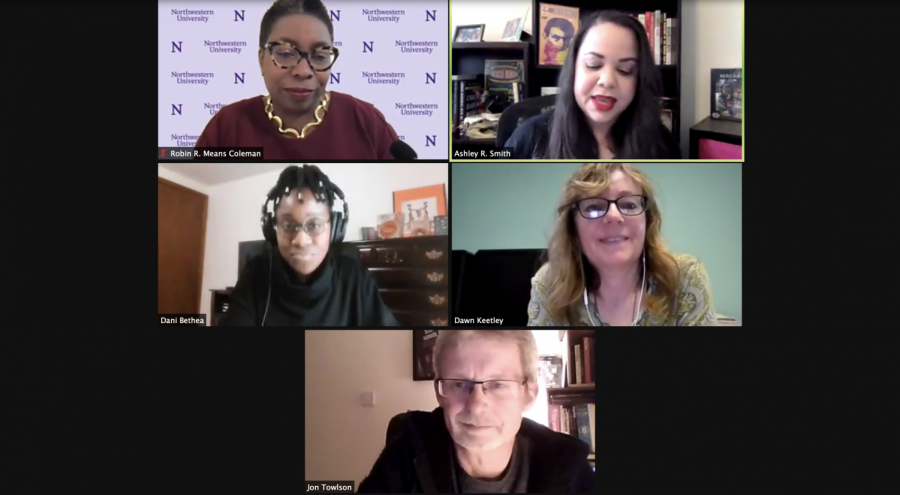 Pitt’s Horror Studies Working Group co-sponsored a panel with the Department of Screen Cultures at Northwestern University and the Department of Arts at Northumbria University Thursday via Zoom. Entitled “Summoning Candyman: A Panel Discussion of the Cinematic Urban Legend” and hosted by the Society for Film and Media Studies’ Horror Studies Scholarly Interest Group, the panel focused on the classic 1992 Black horror film “Candyman.”

Say his name five times into a mirror and he’ll appear — a hook-handed, murderous monster. While it sounds like the plot to a generic slasher movie, “Candyman,” which was released in 1992, delves into complex racial history and has become a pillar of Black horror films.

Pitt’s Horror Studies Working Group co-sponsored a panel with the Department of Screen Cultures at Northwestern University and the Department of Arts at Northumbria University on Thursday via Zoom. Entitled “Summoning Candyman: A Panel Discussion of the Cinematic Urban Legend” and hosted by the Society for Film and Media Studies’ Horror Studies Scholarly Interest Group, the panel focused on the classic horror film “Candyman.”

Ashley Smith, a co-chair of the Scholarly Interest Group, moderated the event, which featured four experts on “Candyman” and other Black horror films. Panelist and writer Dani Bethea said they were struck by “Candyman”’s nuanced plot from the first time they saw it.

“I know ‘Candyman,’ for me, is one of those pieces of media that is like living history,” Bethea said. “When I first saw it, it was one of the first films that really went almost all the way in regards to incorporating fact, fairy tale, urban legend and the fact that so much of that has an intertwining with history.”

The panelists discussed the ways that the film was foundational to Black horror, its shortcomings and the upcoming sequel. The new “Candyman,” slated for release Aug. 27, will be directed by Nia DaCosta and produced by Jordan Peele.

The original “Candyman,” directed by Bernard Rose, was “one of the first horror films to talk about racism as horror, or segregation as horror and the racial implications of history,” according to Sonia Lupher, a visiting lecturer in film and media studies at Pitt and an SIG co-chair.

“Candyman” follows white graduate student Helen Lyle, who begins researching the urban legend of a monster known as the Candyman, who would kill or otherwise harm anyone who summoned him by calling his name in a mirror five times. Lyle’s studies send her to Cabrini-Green, a poor, predominantly Black neighborhood of Chicago where she encounters the Candyman.

“I believe it was the first film to have a Black serial killer franchise figure,” Lupher said. “Tony Todd [who plays Candyman] was launched into the level of stardom that, at least in the horror community, people like Robert Englund, who played Freddy Krueger, have.”

Jon Towlson, author of a book about “Candyman” with the same name, described the film as “a breath of fresh air” for the horror genre.

“There’s not much going on in the 1990s in horror, the franchises were getting very tired, and suddenly ‘Candyman’ appeared and it was like fresh blood,” Towlson said.

Robin Means Coleman, author of “Horror Noire: Blacks in American Horror Films From the 1890s to Present,” said they found “Candyman” to be a representation of historical Black trauma.

“‘Candyman’ steps into that space [of Black representation in horror] and really rejects all of that history of voodoo and makes us deal with Black trauma, and how that trauma is born,” Coleman said.

The titular character in “Candyman” is hundreds of years old, and the son of a slave. According to Lupher, his presence in the film and the torment he inflicts on the Cabrini-Green community are representative of systemic racism that Black people have historically faced.

Panelist Dawn Keetley, a professor of English at Lehigh University and project manager of Horror Homeroom, a website about all aspects of horror, also weighed in on the representation of racism in “Candyman.”

“[The film] is a really sophisticated look at how racism looks,” Keetley said. “It takes up slavery, the aftermath of slavery, segregation, lynching, fears of miscegenation, manufactured fears about white womanhood, policing, the incarceration of Black men, drugs and segregated housing. In a short film, it’s an amazingly condensed look at the forms that racism has taken.”

The original “Candyman” spawned two sequels in the 1990s, but both were quite ill-received by critics, and many have turned their eyes to DaCosta’s and Peele’s sequel as a possible savior of the franchise. All of the panelists expressed high hopes due to fascinating trailers for the film and the successful yet thoughtful history of the new directors and producers.

“There’s a sense that we need this new ‘Candyman’ movie,” Towlson said. “I’m hoping that Nia’s film is going to be an antidote to those awful sequels.”

Due to the success of Peele’s previous films, and the fact that financiers of films want them to be widely successful, Towlson mentioned that Peele and DaCosta might face pressure to make their film palatable to a general audience. But Bethea said they are hoping for something that general audiences and scholars alike can dig their teeth into.

“You have to be willing to get in the trenches with horror that’s gonna resonate,” Bethea said. “Sure, we have our movies where we can sort of turn our brain off and enjoy the ride, but I think more films [should] really start tackling these things, start tackling violence against women in a real way.”

Lupher also pointed out that, given that the original films were directed and written by a white man, Peele and DaCosta can bring a more relevant perspective to the genre.

“Now that [Black filmmakers] are able to make films in greater numbers, we can see a huge shift in topics and perspectives in horror,” Lupher said. “I think this is probably one of those films that Black filmmakers have wanted to get their hands on for a long time and make it into something different.”

Coleman also mentioned they’re hopeful that Peele and DaCosta, as Black filmmakers, can steer the franchise in a more critically engaged direction.