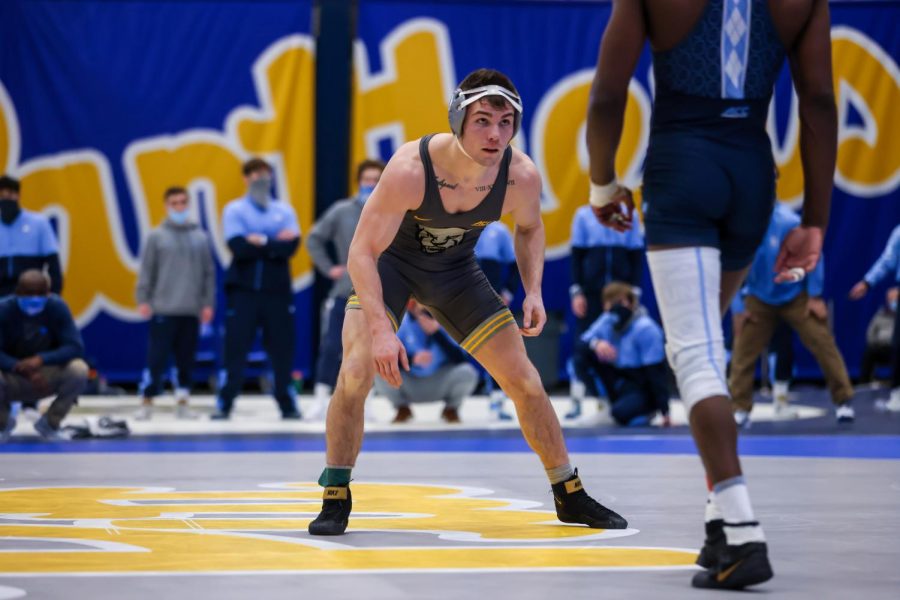 By Tricia Caucci, For The Pitt News

But No. 5 Phillippi, at 133 pounds, said these titles rang hollow to him.

“I remember when they said we were going to get it,” Phillippi said. “We were all like, ‘that’s not real.’ But then we realized it is legit, and we earned it through our season by doing well. But I think it’s gonna be a different experience doing it on the mat, knowing that you won that match.”

This year, the tide seems to have turned in the Panthers’ favor. For the first time in 23 years, three Pitt wrestlers earned top-6 seeds for the 2021 NCAA championships — No. 3 Jake Wentzel at 165 pounds, No. 5 Phillippi at 133 pounds and No. 6 Nino Bonaccorsi at 197 pounds. Along with No. 16 Cole Matthews at 141 pounds and No. 30 Gregg Harvey at 184 pounds, these five Panthers could compete for the opportunity to be an All-American and NCAA champion this weekend in St. Louis, Mo., at the Enterprise Center.

Pitt alum and head coach Keith Gavin feels grateful for the chance to have his wrestlers showcase their skill despite the crazy year. He said the team is excited to be there and that it’s not lost on the team how much work went into this particular event.

“A lot of people, the NCAA, the ACC and the University of Pittsburgh,” Gavin said. “And all the institutions competing have put together a lot of work to make sure that the student athletes get a chance to do it this year. And we think we have some guys that are gonna do very well.”

Two-time defending ACC champion Wenzel (9-1) has already done well, winning by a 1-0 decision in his opening match against Drexel’s Evan Barczak (6-3) on Thursday. Wenzel was also Pitt’s highest individual seed since Max Thomusseit (2 at 184) in 2015. In his mind, though, winning and setting records don’t mean everything.

“We’ve been doing this since we’re five years old,” Wenzel said. “And nothing changes, can’t let the pressure get to you. Just go out there and have fun. I mean, that’s what it ultimately is. It’s fun. The wins and losses add to it. But at the end of the day, you do this because you love it. So just go out there and enjoy the experience.”

Bonaccorsi — whose father and brother both wrestled for Pitt in the past — said it’s nice to have fans, especially his family, gather to cheer on and give advice to the Panthers this year.

“I definitely got some extra voices in my ears,” Bonaccorsi said. “They give me some advice and tips here and there. But it’s kind of nice to have a different support group, guys who’ve been there. It’s definitely great to have some experience in my corner, family and coaches.”

No. 30 Harvey fought hard against No. 3 Lou Deprez (7-0) of Binghamton, but ultimately lost the match 6-4. Still, four out of the five Panthers in attendance advanced to the second round. Gavin said the most important match is the first.

“If you lose that first one, you get a heck of a road back,” Gavin said. “So the first one is a big one. So I’m just getting them one match at a time, one point at a time, one period of time, that kind of mentality is what you need to have to be successful in this tournament, or any big tournament, really.”

But losing one’s first match doesn’t end one’s time in the tournament. Harvey came back in the consolation round, beating Sacred Heart’s No. 33 Joe Accousti 5-0. That result marked his first NCAA win, but he lost his second round matchup to No. 19 Zach Braunagel of Illinois. Matthews lost his second round match 5-3 against Iowa’s No. 1 Jaydin Eierman, but still possesses the potential to wrestle his way to third place and All-American.

Three Panthers still have a shot at the title in the quarterfinals. Phillippi pummeled No. 12 NC State’s Jarrett Trombley 3-1 on Thursday, and Wentzel won his second round matchup versus Nebraska’s No. 14 Peyton Robb 5-1. Bonaccorsi beat No. 11 Virginia’s Jay Aiello in an ACC rematch 10-3.

ESPN3 and the WatchESPN app cover every mat of the 2021 NCAA Championships. The quarterfinals begin Friday at 11 a.m. and the semifinals later that day at 8 p.m. The medal round starts Sunday at 11 a.m.