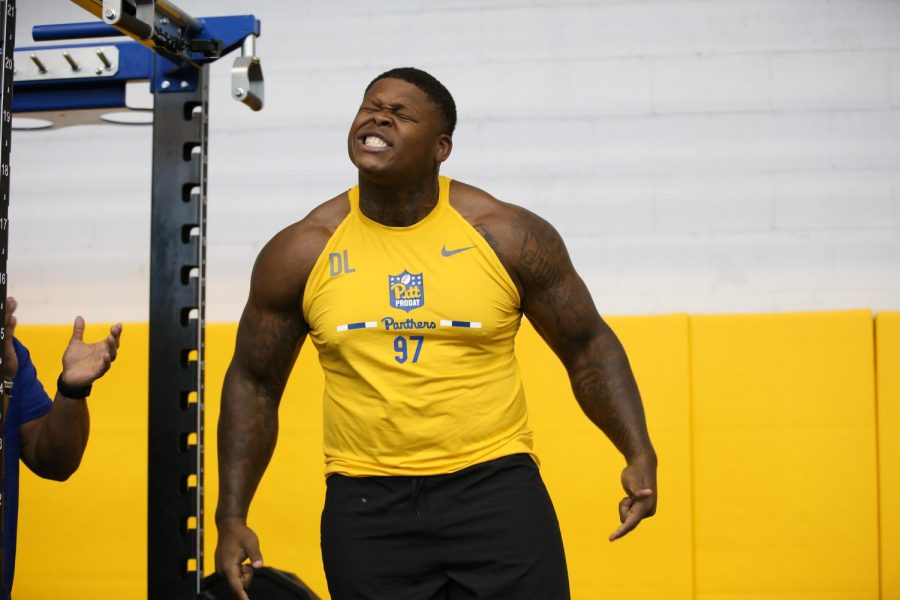 Nearly a year and a half has passed since Jaylen Twyman represented Pitt on a football field, but the star defensive tackle found himself donning the blue and gold one last time at Pitt’s annual football pro day on Wednesday. As he stepped up to the bench press at the Southside Sports Complex just across the Monongahela from Oakland, a chance to settle doubts surrounding his draft value loomed.

Twyman has received many comparisons to Pitt legend and current NFL superstar Aaron Donald for his collegiate success as an undersized defensive tackle. But senior NFL draft analyst Joe Marino has questioned Twyman’s power, saying the 6-foot-2, 290-pound All-American must develop his frame and “get stronger.”

After Twyman’s bench press performance on Wednesday, though, it’s unlikely anyone will question his strength anytime soon. Stepping up to the bar with confidence, Twyman pumped out 40 reps of 225 pounds, standing on the bench afterwards to flex and yell.

“I was definitely excited,” Twyman said. “I was just trying to show all the work that I’ve been putting in and the pain that I’ve built up.”

Twyman later revealed on Twitter that he didn’t do any sort of warm up for the exercise, and that he simply “trusted god.”

Twyman significantly outpaced his competition — only one player had a higher bench press total at last year’s NFL Combine, and nobody reached the 40 mark in 2019. Twyman even beat out his mentor and role model, Donald, who benched 35 reps in 2014. According to RelativeAthleticsScores.com, which compares players’ performances by position, Twyman’s bench press performance ranked 20th out of a pool of 1,259 defensive tackles since 1987.

With this year’s NFL Combine in Indianapolis cancelled due to the COVID-19 pandemic, school-specific pro days play an even more significant role in the pre-draft process. Of the 16 Panthers that participated in the event on Wednesday, six that received invitations to the Combine before it got scrapped, this served as their only chance to show their athleticism to NFL scouts before the draft.

Those six high-profile candidates included defensive linemen Twyman, Rashad Weaver and Patrick Jones II, safeties Paris Ford and Damar Hamlin and center Jimmy Morrissey. Although he missed a once in a lifetime opportunity without the chance to attend the Combine, Jones said he appreciated having the support of his former teammates at this workout.

“It felt good just being out there when I was able to do what I could do,” Jones said. “Just being around all my teammates and being back out there with all of them again, just having the morale with everybody was a good feeling.”

While Weaver and Jones didn’t turn as many heads for their bench press, last season’s defensive line duo made strong impressions in some of the other exercises. Weaver finished the three-cone drill in an impressive 6.98 seconds, more than .2 seconds lower than the league average for a defensive end. Morrissey, who struggled to a 5.30 second 40-yard dash, hoped scouts would focus more on his strong 4.46 second short shuttle time.

“I probably will never run a 40 ever again in my life,” Morrissey said. “I think my 10-yard split was more impressive than my overall 40. I’m glad it’s over with. I’m ready to start training for football instead of sprinting 40 yards.”

Morrissey, projected as a fifth round pick by WalterFootball.com, pointed to his “intangibles” as greater strengths than his athleticism. He said preparing for the Senior Bowl, a type of annual postseason college football all-star game, in less than one day, and excelling at three different positions at that event showed the leadership and mentality he provides. As a former walk-on, Morrissey said his backstory fuels his motivation in this process.

“It speaks to what kind of player I am, too, and my fighting mentality,” Morrissey said. “I’m extremely tough to kill and I don’t give up easily. No matter where I’m at, I’m gonna scratch and crawl to get to where I want to be.”

Morrissey was far from the only Panther to struggle with the 40-yard dash, though. Twyman’s 5.39 second time put him .31 above the league average for defensive tackles, but nobody’s underperformance came as more of a surprise than Ford, who posted times of 4.90 and 4.83.

But Ford has wowed scouts throughout his Pitt career for his electrifying playmaking and ferocious hits. Currently slated as a third round pick by Walter Football, he hopes scouts will see his worth through game film, saying the “proof is in the pudding.”

“At the end of the day, football is football,” Ford said. “As cliche as it sounds, that’s the truth.”

Cornerback Jason Pinnock likely had the most impressive day for the defensive backs, posting a 4.52 second 40-yard dash, and a 39.5 inch vertical jump. Although Pinnock hasn’t received nearly as much chatter from draft analysts as some of his teammates, his 9.69 Relative Athletic Score ranked the best on the team.

Motivated by his snub from the combine, Pinnock said he wanted even better numbers out of himself today. But he said while many analysts have ignored him, NFL teams haven’t — Pinnock said he’s spoken frequently with the Cincinnati Bengals, Jacksonville Jaguars, San Francisco 49ers, Los Angeles Chargers and New York Jets.

“The thing is, the people that will draft me and the people who actually have a say in where I go, they’re not sleeping,” Pinnock said. “It’s more so just the media, so it doesn’t really stress me out, but I’m sure they’re awake.”