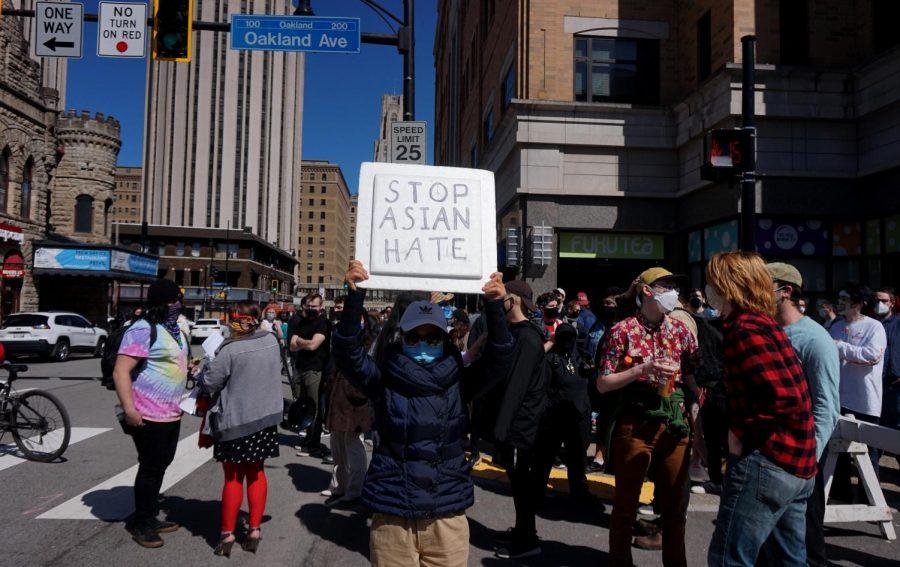 Around 300 people gathered Saturday afternoon at the corner of Forbes and Oakland avenues.

About 300 people gathered Saturday afternoon at the corner of Forbes and Oakland avenues for a “Stop Asian Hate” rally. The crowd chanted, “No hate! No fear! Asian people are welcome here!” as a sign of solidarity to Pittsburgh’s Asian community.

Sandra Oh — an actress best known for her roles on “Grey’s Anatomy” and “Killing Eve” — made a surprise guest appearance at the rally. Oh is currently in Pittsburgh filming her new Netflix show, “The Chair,” and said she is “happy” and “proud” to be in the City.

“For many of us in the community this is the first time we are even able to voice our fear and our anger, and I’m really so grateful for everyone willing to listen,” Oh said. “I know many of us in our community are very scared, and I understand that. One way to get through our fear is to reach out to our community.”

Oh led the crowd, which included many college students, in a chant, saying, “I am proud to be Asian” and, “I belong here.”

The rally — organized by Thrash the State, a Pittsburgh advocacy group — comes in the wake of a Tuesday mass shooting that left eight people dead in Atlanta. Six of the eight people killed in the shootings were women of Asian descent. Crowds gathered across the country on Saturday to protest anti-Asian violence and remember the lives lost in Atlanta.

This shooting is the latest anti-Asian attack in recent months, which have increased dramatically over the course of the COVID-19 pandemic. Stop AAPI Hate, an organization that records incidents of violence and harassment that target Asian Americans and Pacific Islanders, reported nearly 3,800 incidents from last March to this past February.

Chancellor Patrick Gallagher said in a Saturday morning tweet that the Pitt community denounces anti-Asian discrimination “of any kind.”

“Our University stands in steadfast solidarity with our Asian students, faculty, staff, alumni, partners and friends,” Gallagher said. “As a society, we can and must do better.”

Forbes Avenue was blocked off by police for about two hours as Oh and a number of other people shared their stories with the crowd. About 150 people then marched down Forbes Avenue to Carnegie Mellon University. The crowd then went to nearby Flagstaff Hill, and back to the corner of Forbes and Oakland avenues before dispersing.

BREAKING: About 150 to 200 people from the Stop Asian Hate protest have begun marching down Forbes Avenue towards the Cathedral of Learning and Carnegie Mellon University pic.twitter.com/TDEbjJW9qE

Jake B., an organizer with Thrash the State, said organizers chose the corner of Forbes and Oakland avenues for the rally because it contains many of the Asian-owned restaurants in Oakland, such as Oishii Bento and Szechuan Express. Jake, a first-generation Filipino immigrant, then talked about the history of anti-Asian racism in the United States that still impacts Asians today, including the 1875 Page Act and the 1882 Exclusion Act.

Jake also paid homage to Black Pittsburgh activists and organizations, such as Black, Young & Educated, TransYOUniting and Stop the Station, which promoted and supported the event.

BREAKING: A Stop Asian Hate protest has begun in the heart of Oakland at the corner of Forbes and Oakland avenues, with about 250 people present. Stay tuned for updates from the protest. pic.twitter.com/cHwKcSS5Gf

Dozens of other speakers spoke about their personal stories of anti-Asian racism at the rally. Lena Chen, a graduate student at CMU, shared her experience as a sex worker, an artist and a graduate student. She said the Atlanta mass shooting was more than “a crime that resulted purely from racism” but one rooted in long history of sexism and gender-based violence toward sex workers and immigrants.

Chen compared her life experiences to those of her mother — a Chinese immigrant who spent the past 30 years cleaning hotel rooms to help fund Chen’s education. Her mom has a master’s degree in environmental science from a university in China, Chen added. Chen said she can sometimes make more money in one night dancing than her mom could make in three days cleaning.

“My mother washes people’s sheets, scrubs toilets, wipes down windows. I put on platform heels, sit on men’s laps and take my clothes off, and then I write about it for school,” Chen said. “My story is not exactly my mother’s story, and it is not exactly the story of the victims of Atlanta, but it is also in many ways the same story. The story of making difficult choices. A story of dreams and love and ambition.”

Emma Yoon, a first-year psychology and sociology major at Pitt, said she attended the rally because she is reminded every day as a person of color that she is “different.”

“It’s so exhausting to be gaslit every single day by the white boys in my dms telling me that racism doesn’t exist,” Yoon said. “F— that.”

Yoon also said “white supremacy wants to divide us,” but “we can’t let that happen.” She added that white people shouldn’t be praised for doing the bare minimum, such as saying they aren’t racist.

Other members of the Pitt community attended and spoke at the protest as well. Tyler Phan, a lecturer in the anthropology department, said white supremacy is ingrained in this country. He said the “rich white men who didn’t want to pay their taxes” founded this country.

“We are gathered here today not because of something new,” Phan said. “This country was founded on systematic inequality.”

Phan — who first made his son at his side close his ears — led the crowd in a “F— white supremacy” chant. He added that it isn’t the Asian community’s responsibility to solve these issues, rather white people must learn to be anti-racist.

“It’s not up to us, and for all you white allies out here think about this,” Phan said. “Your brothers, your sisters, your uncle, your aunt, your grandma and grandparents — they are part of the issue. It is not up to us to inform your relatives, your friends and family to be anti-racist.”