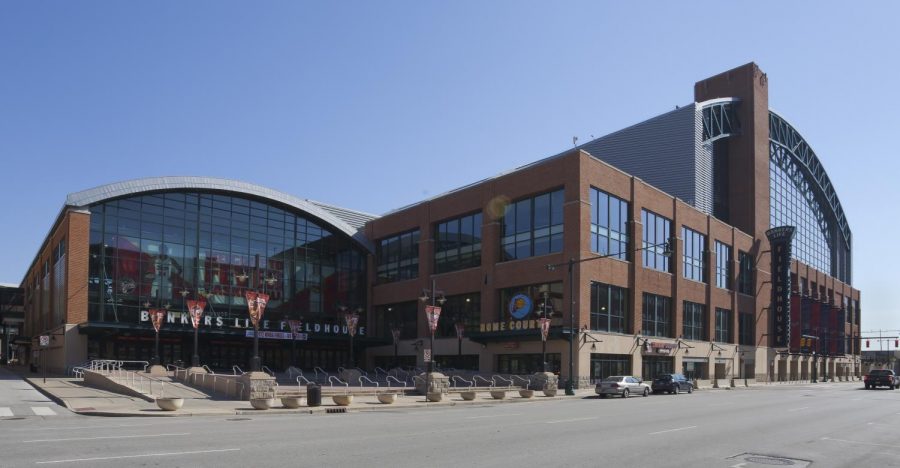 Bankers Life Fieldhouse will host the 2021 NCAA men's basketball tournament games in the first and second rounds and the Sweet 16.

People have been putting the “mad” in March Madness, and for good reason — the National Collegiate Athletic Association provided drastically different facilities for men’s and women’s basketball teams as they train for the biggest basketball tournament of the year.

The equipment provided for the women’s teams was limited to six pairs of dumbbells, a few yoga mats and a stationary bike, while the men’s teams were given a fully equipped gym. Lynn Holzman, the NCAA vice president of women’s basketball, issued a statement on Twitter shortly after photos of the disparate facilities surfaced on March 18.

“We acknowledge that some of the amenities teams would typically have access to have not been as available inside the controlled environment,” Holzman’s statement read. “In part, this is due to the limited space and the original plan was to expand the workout area once additional space was available later in the tournament.”

This statement means little, especially given the TikTok that University of Oregon forward Sedona Prince posted later on March 18. Prince’s TikTok demonstrated that there was not, in fact, “limited space” in the women’s training area — the NCAA simply failed to provide the women’s teams with adequate training equipment.

This incident is blatantly sexist, and the NCAA should be embarrassed that it allowed this to happen. It cannot claim to hold “diversity, inclusion and gender equity” as core values unless it demonstratively treats its athletes fairly and equally, regardless of gender.

It’s been 49 years since Title IX was passed. The law simply declares, “No person in the United States shall, on the basis of sex, be excluded from participation in, be denied the benefits of or be subjected to discrimination under any education program or activity receiving Federal financial assistance.” There is no reason for our country to still have problems with this straightforward law, but somehow organizations are still resisting treating male and female athletes equally.

The NCAA is one of these organizations. Unfortunately, it isn’t legally bound to Title IX due to the 1999 Supreme Court Case NCAA v. Smith. The case held that the dues the NCAA collected from federally funded colleges or universities were not substantial enough to legally bind the NCAA to Title IX protections. However, it seems that if the Supreme Court won’t hold the NCAA accountable to Title IX, the court of public opinion will.

Numerous coaches and players in the NCAA, as well as professional athletes and members of the general public, have spoken out about the shameful differences between the men’s and women’s facilities, and their overall treatment in the March Madness tournament. Dawn Staley, the women’s basketball coach at the University of North Carolina, posted a statement to Twitter on Friday condemning the NCAA for its sexism, particularly in the way it advertised the March Madness tournament.

“The tag line leaves no run for misinterpretation — ‘The Official NCAA March Madness destination for all things Division I/NCAA Men’s Basketball.’ Those words mean one thing — March Madness is ONLY about men’s basketball,” Staley wrote. “How do we explain that to our players? How can an organization that claims to care about ALL member institutions’ student-athlete experiences have a copyrighted term that only ‘represents’ one gender?”

Similarly, Tara VanDerveer, the coach of Stanford’s women’s basketball team, issued a statement to Twitter on Saturday condemning the NCAA’s unequal treatment of its athletes.

“With the obvious disparity between the women’s and men’s tournaments, the message that is being sent to our female athletes, and women across the world, is that you are not valued at the same level as your male counterparts. This is wrong and unacceptable,” VanDerveer said.

The NCAA’s neglect of women’s basketball teams is blatantly sexist and entirely inexcusable. The athletes who compete in the NCAA are some of the most talented and capable people in their sports, and they deserve to be recognized as such. The NCAA cannot claim to value and support its athletes until it does so unequivocally and equally, regardless of gender.