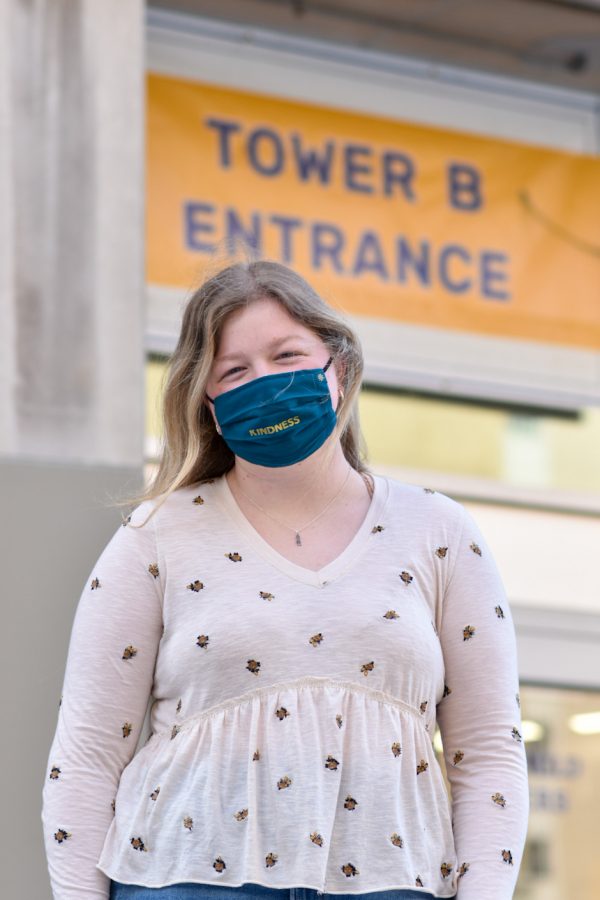 Allie Staman, a junior nursing major, served as an RA in Sutherland Hall last year and currently oversees 34 first-year residents in Tower B.

By Katie Cassidy, For The Pitt News

Adam Pundt, a sophomore astronomy and physics double major, said one of his fondest memories from his first year at Pitt was the floor Thanksgiving his resident assistant, Allie Staman, put together. The day consisted of Staman and her residents cooking the food together before sitting down for a few hours to enjoy the meal.

“We all just sat there and talked with each other for a long time,” Pundt said. “I really am fond of this memory because Thanksgiving is about being with your family. Allie made sure we had that same feeling. I felt like it was a family gathering and we could all just sit there and enjoy each other’s company. We all hung out for a couple hours just enjoying what we had.”

The Pitt News conducts “Best Of” surveys each year, in which students can vote on the “best” things, people and places around campus. This year, the title of “Best RA” was awarded to Staman, a junior nursing major.

Staman said she realized she wanted to be an RA before she even came to college because of her love for mentoring others and forming connections with people. After her first year at Pitt, Staman said she was certain she wanted to pursue an RA position. Staman said her first-year RA made the start of her college journey an enjoyable process. Now, she looks to do the same for her own residents.

“When I came to college I was the only one from my high school. My RA helped me a lot with getting comfortable on campus and being away from everybody that I knew,” Staman said. “I didn’t have that smooth start to my freshman year and my RA was really helpful. Now I try to ease that transition to college for my own residents.”

Staman served as an RA in Sutherland Hall last year, and currently oversees 34 first-year residents in Tower B. She now monitors two floors of residents, since each resident in Towers has their own room due to COVID-19. Staman said COVID-19 restrictions have changed many aspects of her role as an RA and forced her to adapt to virtual settings for nearly every part of her job, such as conducting programs and doing one-on-one check-ins with her residents.

“Community building has become even more intentional than it ever has been,” Staman said. “It’s a lot easier to get to know people when you’re just walking around the hallway and seeing them, but this year there is a lot less of that. I’m having to put in a lot more effort to get to know my residents and build the community.”

Limited in-person activities and increased virtual interactions forced Staman to utilize her “creative muscle” in order to find new ways to engage her residents. Staman said she organizes virtual programs for her residents, conducts one-on-one conversations over Zoom and uses virtual platforms for periodic check-ins. She said she still works hard to make things “fun and creative” for everyone.

Natalie Daw, a sophomore psychology major, had Staman as an RA during her first year in Sutherland Hall. Daw said her first-year dorm had a strong sense of community and radiated positive energy because of Allie.

“Allie is an incredible RA because she genuinely cared,” Daw said. “She puts so much time into her programs and her residents. She also made sure to check in multiple times a month. I felt so close to her and I love being able to call Allie my friend.”

Daw said Staman juggled a lot with nursing school, RA duties and classes, but still made the residents feel like a priority.

“At the beginning of the year, she encouraged all of us to hang out a lot,” Daw said, “We had a really strong group and I felt like I belonged in a community, and it’s because of Allie.”

Ellen Goedert, the resident director for Tower B, said Staman has had to make many adjustments this year due to COVID-19.

“Coming into this year, Allie had to refocus and change her approach to the RA role, and she has done an excellent job,” Goedert said. “Allie has been really creative in her efforts to try to engage and connect her residents to one another, even if it is over Zoom.”

Staman said she always tries her best to focus on the community of her floor and to make sure that she forms connections with each of her residents. She said she values her role as an RA and said it has taught her a lot about herself.

“It has taught me a lot of leadership skills. Communication is huge and there are many different levels and types that I’ve taken away. You’re communicating with your resident director, with other RAs on your team and with your residents,” Staman said. “Also, when you’re working with people and trying to help them, you learn a lot about patience and how to be empathetic and also resourceful.”

Even though the role can be demanding and challenging at times, Staman said it is much more than a job.

“Providing those resources and being a friend and support system that somebody can come to is what being an RA means to me,” Staman said. “I really like community building, I like getting to know people and forming relationships with people. Being an RA is a really good way to be able to do all of that and an awesome opportunity to help people.”

Pundt said Staman was always there for him and went beyond what was asked of her as his first-year RA. Pundt said he often turned to Staman for advice or for a chat and that she made him feel accepted every time. He said she made their floor into a family, with Staman taking on a mom-like role and referring to her residents as her “kids.”

“She really was a huge part in making my freshman year enjoyable because she created a family on our floor where everyone felt welcomed,” Pundt said. “She was there whenever we needed her and she was also like a friend to us.”

Goedert said she thought very highly of Staman and her performance as an RA. She said Staman handles herself like a natural leader, works well with others and overcomes any obstacles that arise.

“I knew from the second I met Allie that she valued relationships and would care deeply for any team she was part of, and that has proven to be very true,” Goedert said. “She is very committed to the success of our entire team and has developed a close connection with every member of the team. She is kind, patient, flexible, supportive and clearly loves being an RA.”

Goedert added that she can see the impact Staman has on the residents and RA team alike.

“Allie has done a wonderful job checking in on her residents, planning programs and trying to connect with each of her residents. She has asked for their input in building their community and planning events,” Goedert said. “Allie has served in various roles for the department and in those roles provides valued insight and feedback.”

Staman plans on going into pediatric nursing after graduation. She will also take on an even more influential role in the fall as the lead resident assistant in Lothrop Hall. An LRA acts as an additional leadership position in the dorm and works closely with the resident director to foster a strong team dynamic. Staman said she looks forward to serving as LRA, being a team builder and continuing her work as a guide and leader to those around her.

“I will always go out of my way to get to know my residents, residents throughout the building, across campus even,” Staman said. “I am here to be a mentor, someone that is a positive role model for them.”