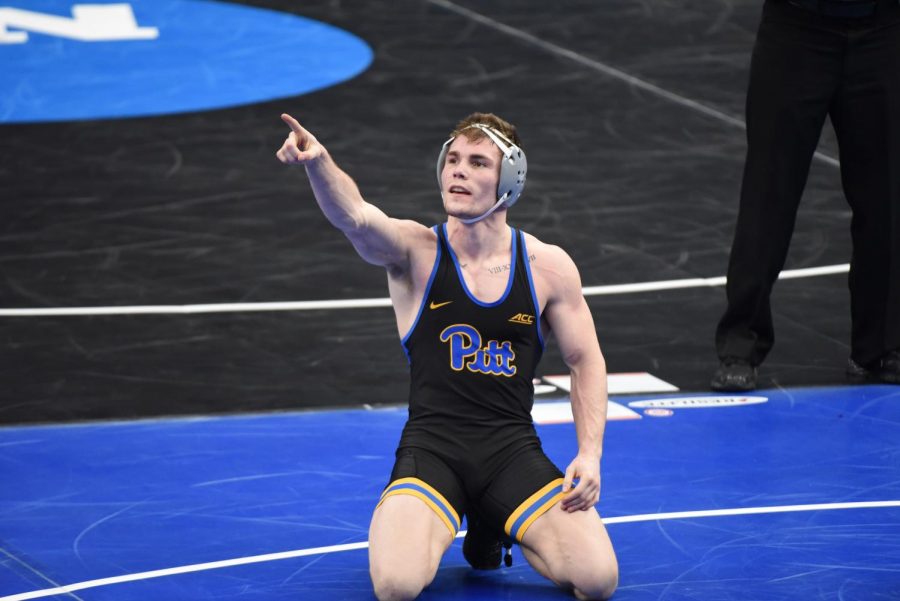 Pitt wrestling placed 11th at the NCAA Wrestling Championships on Saturday. Senior Jake Wentzel (pictured) and redshirt junior Nico Bonaccorsi made it to the finals of their respective brackets, but neither won in their finals matchup.

Pitt baseball and volleyball capped off a packed weekend of Pitt sports with wins over ACC opponents. Earlier in the weekend, Pitt wrestling finished 11th in the NCAA championships.

Read finished 27th in the preliminaries of the platform dive, while McDaniels placed 36th. Neither qualified for the finals.

The Men’s Swimming and Diving Championships will start on Wednesday, March 24.

Pitt softball continued on its downward trend this weekend, dropping a series against Virginia Tech three games to one.

In game one on Friday, Virginia held Pitt to just one hit in seven innings, eventually losing the game 9-0. An early six-run lead for Virigina Tech ultimately proved too much for Pitt to overcome.

Pitt picked up its lone win of the series in game two on Saturday, the first of a double-header. A rally in the fourth inning gave Pitt four runs, and the Panthers ultimately won the game 5-3.

Virginia held Pitt again to just one hit in another decisive Virginia Tech win in game three. Virginia outhit Pitt 10-1, leading to a 5-0 loss for Pitt. Game four proved to be the same story, with Pitt being outhit 5-1 and falling by a final score of 2-0. Three hits in three games will force Pitt back to the drawing board as it looks to jumpstart the offense.

Pitt falls to 9-14 overall and 4-9 in conference at the conclusion of the weekend. The Panthers will look to recover from those tough losses in a four-game series against Syracuse next weekend.

Pitt baseball has been making a name for itself on the national stage this season after taking down No. 9 FSU and No. 7 Georgia Tech in convincing fashion. This weekend, the Panthers looked to continue that upward trend in their series against Virginia.

Game one on Saturday was a pitcher’s duel. Pitt only needed two runs to secure the win. Junior Mitch Myers got the win for the Panthers. He pitched a complete game and only surrendered three hits, improving his own record to 2-2 on the season.

Game two on Sunday went again in Pitt’s favor, this time 6-2. Senior outfielder Nico Popa led the game offensively, finishing 3-5 with a home run and three RBIs. Junior pitcher Matt Gilbertson was credited with the win — his third of the season — after tossing eight strong innings on the mound.

Pitt improved its record to 11-4 overall and 7-3 in conference. The Panthers will look to finish off the sweep of Virginia on Monday afternoon, a 1 p.m. start that the ACC Network Extra will broadcast.

Pitt volleyball squared off with ACC foe Miami on Saturday.

The match was a convincing one with Pitt winning the best of five 3-1. Pitt took game one 25-17, game three 25-16 and game four 25-20. Pitt ended up outscoring Miami in every statistical category except for aces. Senior Kayla Lund helped pave the path to victory with 12 kills, while junior Sabrina Starks dominated at the net with seven blocks.

In contrast, the match against Duke on Sunday was a nail-biter. Pitt ended up taking the match in set five, 22-20 in the final game. Pitt again led the series in all offensive statistical categories. Lund dominated the kill category yet again, this time with 21. Lund couldn’t have done it without the help of redshirt senior Kylee Levers, who led the game with 30 assists.

Pitt improves its record to 11-4 overall and 10-4 in conference. The Panthers will face rival West Virginia at home on Wednesday.