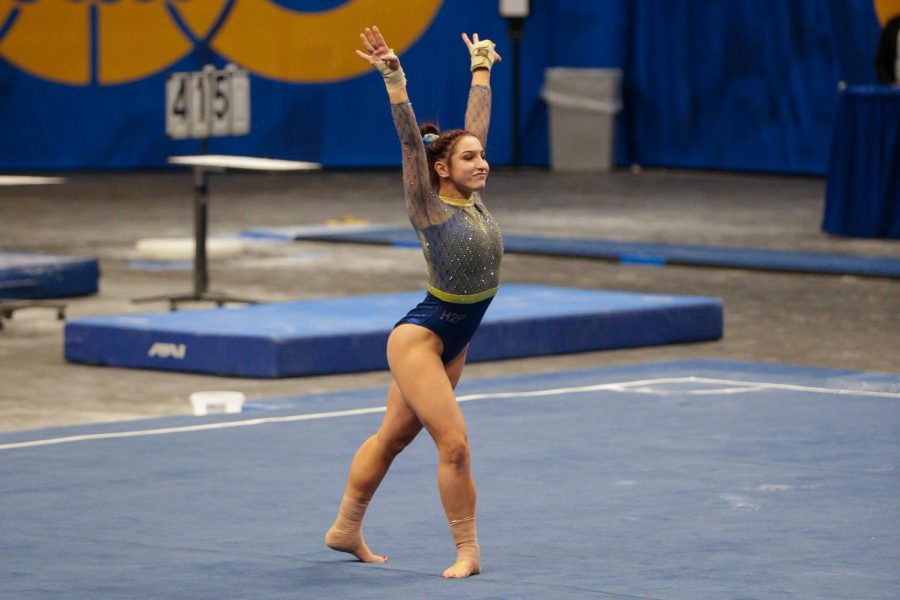 Senior gymnast Jordan Ceccarini tied for first in floor exercise with a score of 9.90.

The Petersen Events Center hosted the East Atlantic Gymnastics League Championship for the first time in 17 years Saturday night. The seven competing teams — No. 1 NC State, No. 2 Towson, No. 4 Temple, No. 5 North Carolina, No. 6 Pitt, No. 7 George Washington and No. 8 LIU — battled it out to see who would wear the League’s crown after the irregular 2021 season.

Head coach Samantha Snider said putting the championships together was a team effort. She was grateful to have been able to put on the meet at all, but even more so that Pitt could host it at the Pete.

“It was a lot of work that went on behind the scenes,” Snider said. “So I really need to give the proper kudos to those who deserve it in our administration, our facilities management team, they did a phenomenal job. And to have it in the Pete really elevates the status of the competition and the atmosphere here.”

Pitt senior Jordan Ceccarini said performing in the Pete lived up to what she had imagined.

“As a freshman, competing in here was a dream,” Ceccarini said. “And it’s kind of like that dream has now come true, and it’s just an amazing experience to be able to compete in the Pete. It’s like a privilege.”

After a tough two sessions, Temple won the meet with a resounding 196.500, beating 2nd place NC State by 0.45 points. Snider said the meet was high energy and high stakes.

“You had to perform to your highest ability,” Snider said, “to have a shot to win. It really came down to that last rotation. It was exciting to watch the champion get crowned tonight because Temple was a great team. They put all four events together, and they earned the win. And it’s always exciting when every team is pushing each other to be the best that they can be.”

Although Pitt as a team came in sixth with a score of 194.350, there were some standout performances that collected top honors. Ceccarini tied for first in floor exercise, matching her own career best and earning a season high. She is the first event champion for the Panthers since Brittany West’s 9.900 took the top spot on the balance beam in 2017.

Ceccarini’s performance also contributed to the highest floor score of the season for Pitt with a 49.050. The senior said it felt like she came full circle to win the title after posting the same score of 9.900 as she did in the EAGL Championships her first year.

“I’m super excited that I ended my senior year the same way I ended my freshman year with the same score on the same event,” Ceccarini said. “Floor has always been my favorite, so it was just really thrilling to put an exclamation point on my floor career.”

Graduate student Katrina Coca also brought her A-game, earning second place on the uneven bars and fourth place in the all-around. She was even named 2021 Senior Gymnast of the Year after overcoming a ruptured Achilles tendon that sidelined her in the 2020 season. She returned to win five individual event titles and was named All-EAGL First Team on the uneven bars in 2021.

While the season ended for most of Pitt gymnastics, Coca will head to regionals on Friday, April 2. She said awards aren’t the most important part of gymnastics to her. She simply enjoys showing people what she can do.

“All those awards were amazing,” Coca said. “But I’ve never looked forward to that. And being able to come back after that injury and show people that I am still capable of doing all the events was amazing. I like to show off a little bit, and show that my hard work will pay off. And what I look towards is to perfect what, who I am and how I perform in competition.”

Whereas some athletes performed to the best of their abilities, some ran into road blocks. First-team all-arounder and first-team balance beam sophomore Lauren Beckwith fell off the uneven bars. Beckwith said she was disappointed but got her rhythm back afterwards.

“Coach told me to take my time and to redo the skill,” Beckwith said. “I was just thinking to get as much of a clean slate as I can. Starting out that cast handstand was super important to get my rhythm back. I was really disappointed. But I was glad that I brought it back for beam.”

Although Beckwith’s solid score of 9.850 on the balance beam didn’t place, she said she’s using this year as a learning opportunity for the next season.

“I think we have the opportunity to look at tonight as a building point for next year,” Beckwith said. “Trying to look towards the future is just super important. And although the road ends for most of the team tonight, it’s also important to put all of our efforts into Katrina as she continues on to regionals.”

Supporting Coca seemed to be on the forefront of the team’s mind after the meet. Snider said she’s excited to have Coca represent the program at the next level.

“This year, we do have Katrina, who’s qualified to postseason regionals as an individual on bars,” Snider said. “She’s a wonderful ambassador to show what it means to be an athlete at University of Pittsburgh and more so gymnast here at Pitt. And I know that the team is going to be tremendously supportive, because that’s just who they are. That’s their character.”

Despite some of Pitt’s individual stars, Pitt as a team didn’t qualify for regionals. Snider said the last team meet of the season was bittersweet.

“This meet tonight was definitely bittersweet for me as a coach,” Snider said. “To be able to have the conference at the Pete is a big deal for us. We fell short of our goals this year and didn’t qualify to regionals as a team. And that’s our major goal at the beginning of every year. In my mindset, right now, as a coach and as a leader of this program, next year starts right now.”