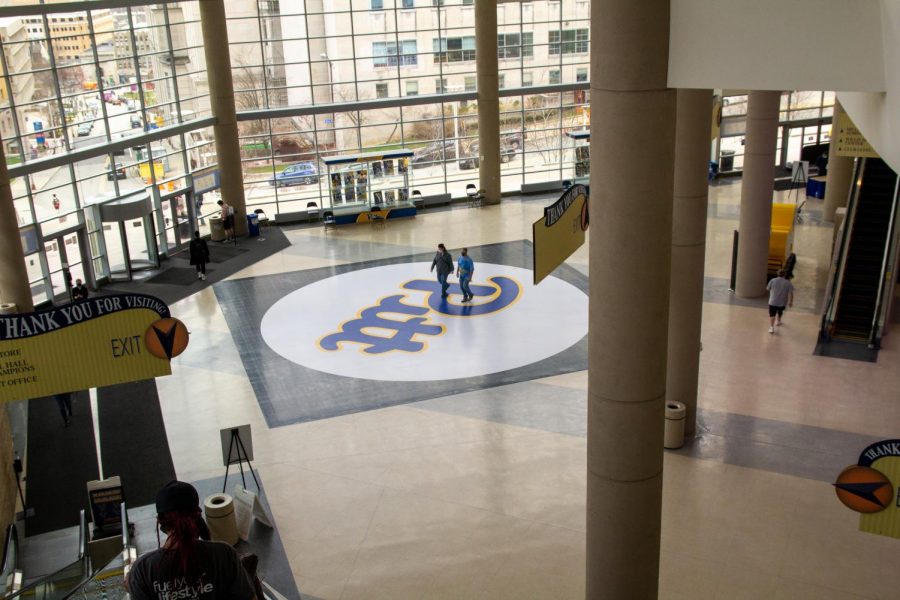 Pitt Athletics announced in 2019 that it would begin allowing alcohol sales at the Petersen Events Center.

From any vantage point near Point State Park, Pittsburghers can look up and see the Iron City Beer sign sitting on the side of Mount Washington. At night, the iconic red letters and white canvas pop under the lights and stand alone on the mountainside, serving as a constant reminder of the City’s connection to Iron City Beer.

Pittsburgh sports and Iron City Beer have gone hand in hand for what seems like forever. Iron City released Steelers-themed cans for special occasions during the 1970s to the 1990s — from events as big as a conference championship or as small as the team picture, Iron City was sure to honor the Steelers with special edition cans.

The brewery has declared itself “the premium light lager that embodies all things black and gold. It’s preferred by champions everywhere.”

Christian Spears, Pitt’s deputy athletic director, cited Iron City’s history with Pittsburgh sports as a reason Pitt decided to partner with the company. According to Spears, Pitt’s athletic department had a plethora of Pennsylvania breweries to choose from as the official local brewery of the Panthers.

“There’s a cool history with breweries in Pennsylvania and we had some different options,” Spears, who oversees departments such as revenue generation, marketing and licensing, said. “Iron City really wanted to be that official local beer. They’ve done some really good things with the other professional organizations that set them apart.”

The Pittsburgh Brewing Company, which brews IC Light, echoed Spears’ excitement about the partnership and looks forward to furthering its relationship with the City’s teams.

“There is nothing more Pittsburgh than cheering on the Pitt Panthers while enjoying an IC Light,” the Pittsburgh Brewing team said.

The partnership with IC and the ability to sell alcohol at the Pete were financially motivated as well, according to Spears. Based on a small sample size from 2019, Spears anticipates that when the Pete can return to full capacity, Pitt could make anywhere from $100,000 to $200,000 in annual revenue off of beer sales.

Spears said the revenue from alcohol sales goes toward Student Affairs initiatives to provide students with events that oftentimes exclude alcohol, such as the Late Night Substance-Free Event and the annual Haunted Holland events held in the past.

Although much of the student population at Pitt is under the legal drinking age and can’t order an IC Light for themselves, many of the fans in attendance are of age and can legally purchase and consume beer. Spears believes this is a decision that fans should be able to make for themselves when taking in a game.

“There’s been sale of alcohol at concerts and other events at the Petersen Events Center — why can fans do it there and not here?” Spears said. “So we decided let’s test it and pilot it at the Pete. Fans deserve to have the opportunity to have the beer if they want to at a game — that is their choice and we should provide the opportunity for them to choose that.”

The athletic department has taken several measures to ensure that only those over 21 will consume the beer and will do so responsibly, such as the banning of beer in the Oakland Zoo section as well as training vendors to ensure they are only selling to fans of legal age, according to Spears.

Pitt began selling alcohol in 2016 during football games at Heinz Field. And instead of the drunken, misbehaved fans some might have feared selling alcohol would allow, incidents of unruly behavior actually decreased at games, according to Spears. He believes that there is a correlation between the two variables, due to fans drinking less outside of the stadium because there is an option to drink more once inside — meaning fans won’t be as intoxicated upon entrance.

“Prior to alcohol being sold, fans were drinking in excess outside because they couldn’t get anything inside,” Spears said.

Spears also said fans will often not spend the money on expensive stadium prices for beers — meaning that less alcohol will be consumed. He said this was another reason the athletic department decided to allow the sale of alcohol at the Pete.

“We used this data available from Heinz Field and tried to make an informed decision at the Pete,” Spears said.

Although spectators have yet to enjoy an IC Light at the Pete yet due to the COVID-19 pandemic, the brewery and Pitt have new ideas for future endeavors to try and enhance the fan experience and promote both parties’ brands — including a new seating area within the Pete with the Iron City branding.

“Just beneath the video scoreboards, we’re creating a new area, on a deck, that will be specific to IC Light,” Spears said. “It essentially allows someone to come into this space and watch from above and have a mix-and-mingle scene.”

This new seating deck will allow Iron City to showcase its brand and Pitt to increase ticket sales for basketball games, according to Spears. The goal of this new “deck,” as Spears referred to it, is to provide younger alumni with an environment to connect with former peers and share their passion for Pitt basketball while watching the game from a bird’s-eye view.

It is yet to be seen how the introduction of alcohol will fare in a full season with fans at the Pete, but the athletic department has high hopes. While Pitt has taken steps to partner with IC Light, it will move slowly before jumping into the deep end and allowing the brewery to use Pitt branding.

“We’re not prepared yet to put the Pitt script on a beer can, but I think it’s something that we can revisit,” Spears said. “We don’t have enough anecdotal evidence about data sales of alcohol at the Pete because of the pandemic — whether that be good or bad. For them to go public sale with our logo, we just aren’t there yet.”