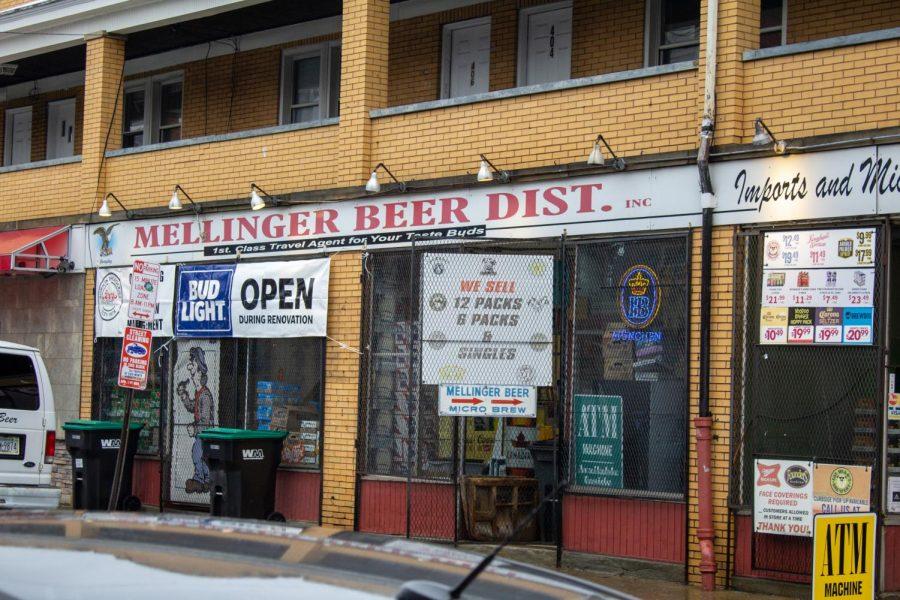 Mellinger’s Beer Distributor was voted the best beer distributor in Oakland, according to The Pitt News’ readership. The store switched management in February after the current owners, Neil and Neha Shah, bought it from Diana Bellisario, who owned and operated the distributor for just three months shy of 30 years.

By Alex Busterna and Charlie Taylor

With hundreds of selections and a location in the heart of South Oakland, Mellinger’s has long been a staple of campus life — and the best beer distributor in Oakland, according to The Pitt News’ readership.

Located at the corner of Bates and Semple streets is Mellinger’s Beer Distributor. Known to many as “Mel’s,” the distributor has been proudly serving Oakland for 80 years. The store switched management in February after the current owners, Neil and Neha Shah, bought it from Diana Bellisario, who owned and operated the distributor for just three months shy of 30 years.

According to Bellisario, she sold the distributor because she wanted to retire, but the decades-long Oakland resident has no intentions of leaving behind her customers and employees.

“You could imagine how many people I had working for me over almost 30 years. And a lot of them reached out to me, like when they’ve seen [the announcement] on Facebook, and they still reach out every now and then to wish me a happy birthday or Merry Christmas,” Bellisario said. “We were family there.”

Neha Shah said she and her husband had been looking to buy a new store and heard Bellisario was considering selling over two years ago. She said although they had planned to buy the business last year, the COVID-19 pandemic delayed the exchange.

“I like the Oakland area because it’s a student area, young crowd, more positive energy and fun to work with,” Shah said. “Two and a half years ago … I started visiting her, I introduced myself and I kind of built a trust saying that I’m really interested in working with her.”

The liveliness of the neighborhood also struck Bellisario as one of the things she’ll miss most about running Mel’s. Still, she won’t have to go far be amongst student life. She grew up in Polish Hill, but she and her husband moved to Oakland after their marriage in 1973.

“I’m still a resident of Oakland and I have no plans on leaving. I love the atmosphere, being around all the college students. Everybody knows me, I know them. They keep me young,” Bellisario said.

The change in ownership will come with adjustments to the business model. The Shahs have already extended the store hours, and according to Neha Shah, they plan to open more of the building, allowing customers to spend time browsing the selection. Currently, customers give their orders to employees, who bring items to them from the back room.

“I want to create a more customer-friendly environment where students can walk in and feel comfortable,” she said. “Everyone likes to see, touch — and [the] beer industry nowadays is like a candy shop. You walk around, you feel so excited about different products.”

Neha Shah said they also plan to “clean up” the interior of the store to bring it more in line with the personal shopping experience she hopes to introduce.

“I’m brightening up the place, making everything more like a shop — nicer upscale shop than the way it is right now, which worked for everyone all those years. There’s nothing wrong about it, but it’s nice to have [a] cleaner, customer-friendly environment,” she said.

Still, the Shahs plan to keep the Mellinger name, which started with founder Harry Mellinger in the early 1940s.

“The name is staying the same. That name is there in the Oakland area for over 80 years now,” Shah said.

Even with the future plans for Mellinger’s, Steve Bambury, a senior accounting and business information systems double major, said he enjoys the store that still operates how it originally did.

“I like the selection the most at Mel’s, it has the best collection of craft beer in South Oakland,” Bambury said. “They also never run out of inventory — you can always count on them having a case of the beer or seltzer you want.”

Evan Lewis, a senior communications major, also said he was impressed with the store, because “the selection is nice and the prices aren’t too crazy.”

Bellisario said she felt Mel’s became a staple in Oakland in part because she, her family and her employees — including Matt Hallahan, who still works there under the new management — were interested in getting to know their customers and neighbors.

“I guess it was because of me and my daughter running the store — before that was my husband — and then plus I had really good workers that worked for me,” Bellisario said. “I guess people respected that and always went out of their way to make sure that they came back to us.”

“As long as I know, everybody tells me that when people walk into campus, the first thing they know is about Mellinger, which I’m kind of happy about. But at the same time I would ask everybody, drink carefully.”

Bellisario said she hasn’t been following the new changes to the shop because she wants to focus on her retirement — during which she’s been even busier than when she ran Mel’s.

“I had the adventure of my life. I am very blessed with the way everything fell for me,” she said. “This is what I was supposed to do, and now it’s time for me to take another direction in life, and just enjoy, y’know?”