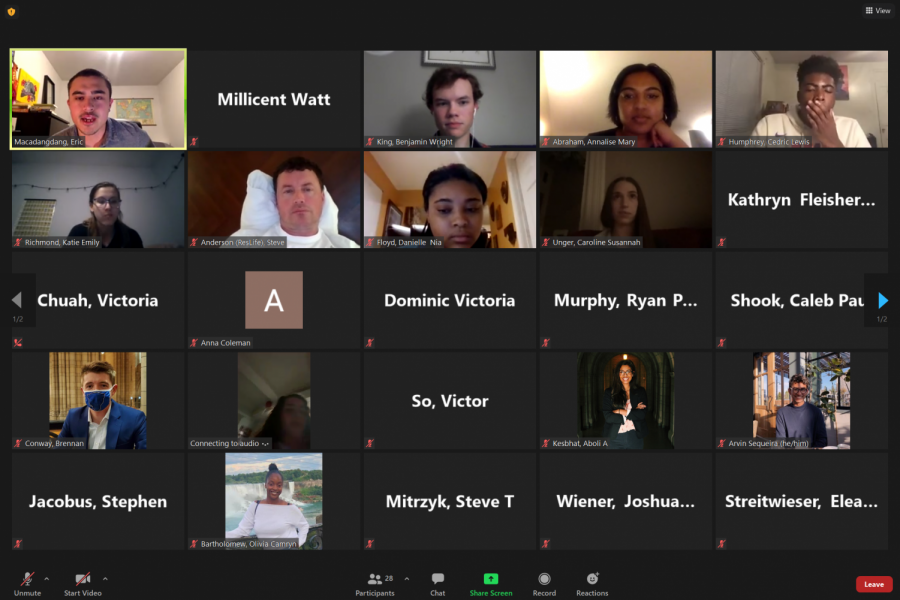 Student Government Board held its weekly public meeting on Tuesday.

Pitt Student Government Board president Eric Macadangdang began the board’s Tuesday evening meeting by naming each of the eight Atlanta shooting victims — six of them being women of Asian descent. The shooting, which took place last Tuesday, has been the most recent of anti-Asian attacks, which have spiked since the beginning of the COVID-19 pandemic. He said SGB sends “deep love and healing” to the Asian community and others affected by the tragedy.

“We also stand in solidarity with the Asian community, both here at Pitt and beyond, against the racism and xenophobia that has become all too common in this world,” Macadangdang said.

In response to the Atlanta shooting, as well as the shooting in Boulder, Colorado — which resulted in 10 deaths — Macadangdang said overcoming bigotry is not a “passive activity,” but requires a deep understanding of deep-rooted problems such as white supremacy and misogyny.

“As we reflect and mourn, let’s remember that solidarity and progress cannot and must not be a passive activity. It requires us all to learn and unlearn, do and undo,” Macadangdang said. “It requires us to understand how systemic issues like white supremacy, imperialism and misogyny, all are intertwined in the continued violence and oppression done onto the most marginalized involved among us.”

Macadangdang said as the country and Pitt begin to transition back to “normal” — pre-pandemic times — we should not revert back to a “carbon copy of life before last March,” and that we should “reimagine a new ‘normal,’ free of gun violence and perpetuated racism and discrimination.”

Macadangdang closed out his remarks by saying “tangible, real change” has to occur until we can reach such a level of “reimagination.”

“This reimagination does require tangible, real change to be done by all levels of leadership in this country, and we must make sure that we don’t allow ourselves and others to fall into a senseless tragedy, allowing that to fall between the cracks of empty thoughts and prayers again,” Macadangdang said.

Pitt had a virtual Pitt Day in Harrisburg event throughout the day on Tuesday, where Pitt students could meet Pennsylvania lawmakers and advocate for the importance of state funding and budgeting for Pitt. According to Macadangdang, Pitt Day in Harrisburg allows students to advocate “how and why Pitt makes such an invaluable impact both to our region and our state.”

Macadangdang also encouraged students to reach out to Pennsylvania legislators to voice their concerns and share how their Pitt experience has affected them, especially as tuition costs and student debt continue to rise.

SGB’s public art competition’s deadline has now been extended from March 23 to March 30. Students can enter by designing a mural, which, according to SGB’s website, reflects the “struggle for justice,” specifically highlighting the Black Lives Matter movement and the Tree of Life massacre.

After the application deadline, three finalists will be chosen on April 2, and Pitt students can vote on their favorite design until April 6.

“We’ve already gotten a lot of helpful responses, we just want to hear from as many students as possible as part of this process,” King said. “So if you have any thoughts about the election, please take a look at that survey and let us know.”

Tyler Viljaste, vice president and chief of cabinet, Chief of Staff Caroline Unger and the rest of the board have worked on a resolution in support of Lauren’s Promise, which states, “I will listen and believe you if someone is threatening you.”

Alina Sheykhet, a Pitt student, was killed in 2017 by her ex-boyfriend in South Oakland, even after filing for a protection from abuse and restraining order against him. Sheykhet also mentioned physical and emotional abuse from her ex-boyfriend, as well as attempted break-ins. Loved ones held a Walk for Love in 2019 to pay tribute to Sheykhet. Sheykhet’s family also created Alina’s Light, an organization and charity dedicated to promoting domestic abuse education.

Viljaste said by adopting Lauren’s Promise, Pitt students can feel supported and have access to necessary resources if they are experiencing harassment, violence or abuse.

“I worked alongside Chief of Staff Unger on this resolution to call on University leadership and faculty at the University of Pittsburgh to adopt Lauren’s Promise, which gives students another advocate and points students to resources available on campus in the community for sexual harrassment, sexual violence, relationship violence and stalking,” Viljaste said.

The resolution was proposed to pass but was waived by board member Kathryn Fleisher, causing the proposal’s vote to be delayed until next week’s public meeting. The proposal is available on SGB’s website under the proposed legislation tab, for students to review and provide feedback.

Aboli Kesbhat, allocations committee chair, said spring budgets, which are used for funds in the 2021-22 academic year, are due April 12 at 1 p.m. According to Kesbhat, spring budgets are optional for non-governance groups. Governance groups, however, must fill out a budget if they need more than $5,000.

Kesbhat said if student organizations are confused or need help, they should reach out to either her or the allocations committee liaisons to walk through the budgeting process.

“A complete budget makes us ever so happy, so we would love to be of any help in any way we can and make the process a little bit easier by reviewing the substance of your budget and walking you through the entire process itself,” Kesbhat said.

President-elect Harshitha Ramanan, who is on the search committee, was not present at Tuesday’s meeting — her third consecutive public meeting absence since being elected.

Macadangdang said Tuesday evening he hopes Pitt students can take the day to relax. Macadangdang also encouraged students to contact Danielle Floyd, SGB’s wellness committee chair, if Pitt faculty are not accommodating to the day off.

“Tomorrow is the University’s second self-care day of the semester, a day without classes, so that in theory we can all focus on our personal well-being,” Macadangdang said. “I truly hope that we can take part in at least part of the day tomorrow in unplugging, relaxing and reassessing our mental and spiritual well-being.”

The allocations committee received one request of $355.34. No requests required board approval.