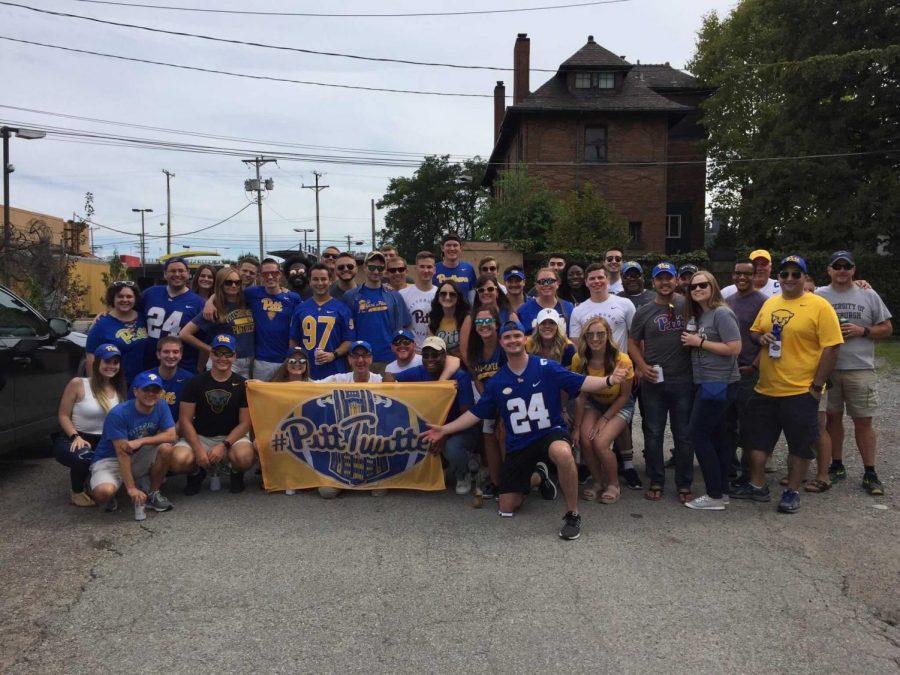 Members of the “Pitt Twitter” community gather to tailgate outside of Heinz Field before a Pitt football game in 2019.

Whether they are devoted lifelong season ticket holders, current students or the passionate fans who make up “Pitt Twitter,” tailgating is essential to the game day experience of many Pitt football attendees. Fans of drinking age can use the term “tailgating” almost synonymously with “alcohol.”

Thousands of people fill the lots surrounding Heinz Field each Saturday to celebrate game days, and three regulars at Pitt football games provided some insight into what goes on before they pack into the stadium.

Jerry Gaughan graduated from Pitt in 1982 and has been a season ticket holder for as long as he can remember. He claims to only have missed roughly 10 home games since 1970. With all of these matchups under his belt, Gaughan has plenty of alcohol-related memories at both Pitt Stadium and Heinz Field. In fact, some of those memories come from a young age, watching the conduct of Pitt students at the games.

“In old Pitt Stadium, there used to be wooden bleachers, and some of the students in one corner took a bunch of bleachers because it was cold and started a fire,” Gaughan said. “I think the alcohol was working then.”

Decades of attending Pitt games have also led to plenty of tailgating traditions for Gaughan. He enjoys drinking and socializing before games, mainly with his family and friends, but his tailgates are open to really anybody, friend or foe.

“We always welcome anyone. As long as they have proper ID, they can stop by and have a beverage with us,” Gaughan said. “Even the opposing team.”

Prior to entering the stadium, Gaughan’s tailgating crew has developed a drinking ritual, where everyone must take a shot of their own personal favorite alcohol.

“We have a tradition that everyone has to have a shot before they go into the stadium,” Gaughan said. “We have a nice assortment of adult beverages. Everyone usually has a go-to, mine is just some type of whiskey.”

The drinking does not stop with the tailgate, however. While Gaughan does not do much drinking in the stadium, the party usually continues after the game if the people in his group remain in relatively good spirits, win or loss.

“Sometimes if we run out of alcohol we head to one of the local watering holes,” Gaughan said. “At Pitt Stadium, it was always Peter’s Pub.”

While the North Shore has been the pregame location for quite some time now, this simply changes the names of the bars and lots where the tailgates occur, not the traditions they hold. Pablo Salazar, a senior chemical engineering major at Pitt, said he held season tickets for the Panthers before the COVID-19 pandemic. He emphasized that he likes to start early and space out his drinking to ensure the tailgate lasts for as long as possible, and this impacts his alcohol of choice.

“Seltzers and light stuff like that we can drink for a while and be easy,” Salazar said.

For Salazar, not too many specific traditions have developed, but his tailgating experiences have been very characteristic of what a typical tailgate is thought to look like. There are plenty of games, hot dogs and, of course, drinks.

“If it was a really early game, we would bring the mimosas out,” Salazar said. “Sometimes we will have a little cornhole tournament, just your typical tailgating games. And lots of grilling, definitely grill out some hot dogs and burgers.”

On the topic of tradition, perhaps one of the greatest emerging tailgating traditions at Heinz Field is the “Hailgate.” The annual tailgate was originally organized through active Pitt fans on Twitter who wanted to meet up in real life. Corey Culton said he and four other users started the tradition five years ago and that it has become the highlight of their season each year.

“Four of us just sat down and said let’s get together, let’s have a tailgate and let’s just invite people from Twitter and see who shows up and wants to meet people,” Culton said. “We probably ended up with, gosh, there must’ve been 50 to 75 people there.”

Culton attended Pitt from 1994-99, a stretch he described as “terrible” for Pitt Athletics in general. This lack of success has coincidentally become associated with the Hailgate in the five years of its existence. It’s intentionally scheduled for a big game each year, whether that be the season opener or a rivalry game — like a 51-6 loss to Penn State in 2018.

“We haven’t actually had a Hailgate with a win yet,” Culton said.

But regardless of the outcome of the game, the Hailgate always features a lively atmosphere with plenty of alcohol present. While Culton enters each year somewhat unsure of just how many people will show up, he does not have to worry about purchasing the drinks himself.

“I tell everybody, we’ll bring the coolers and ice, and you bring what you want to drink,” Culton said. “It works out great because usually everyone brings too much.”

The attendees supply many different kinds of beer, and Culton highlighted craft beers of many kinds as his particular favorite drinks. However, one drink present makes the Hailgate particularly unique. The group created an official drink for the annual celebration — two handles of vodka, two 30-can cases of Natural Light and two containers of lemonade flavoring powder.

“We do have an official Hailgate drink called skippy,” Culton said. “It really does taste good. You wouldn’t think so, but it does.”

All three fans made it very clear that they do not usually buy any alcohol within the stadium, other than the occasional beer or two during some of the crazier games. Culton summarized what seemed to be the collective message in terms of the beer inside of Heinz Field.

“It is expensive, I’ve usually been drinking for four to five hours at this point,” Culton said. “By the time I get in the stadium I’m either not in the mood to drink anymore or don’t need to drink anymore.”

The Hailgate that Culton and his fellow Twitter organizers started embodies everything they believe a tailgate should entail –– a community of people who don’t even necessarily know each other bonding over a common love for Pitt football, with plenty of alcohol involved in the process.